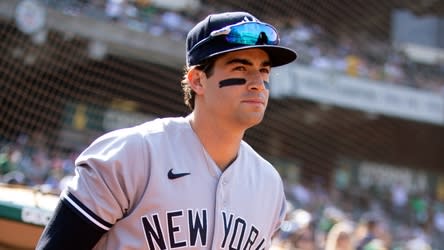 The Yankees announced a minor trade on Monday, sending Tyler Wade to the Los Angeles Angels for a player to be named later or cash considerations.

Wade was one of three Yankees designated for assignment over the weekend, including Clint Frazier and Rougned Odor, which allowed them 10 days to figure out a trade before they were put on waivers.

Wade’s versatility in the field, along with his speed on the basepaths, made him a candidate to be traded and New York ironed one out.

Now the Angels currently have Wade and Andrew Velazquez, who burst onto the scene for the Yanks this season when he had to fill in at shortstop.

All Wade knows is the Yankees, having signed with them straight out of high school. He was a fourth-round pick in the 2013 MLB Draft and worked his way up through the ranks with players like Aaron Judge and Gary Sanchez.

This past season was his first full year in the bigs and he did well when called upon, hitting .268/.354/.323 with a .677 OPS — decent numbers for a primary bench player. He also collected 17 stolen bases, an area of expertise for him and valuable for the Yanks whenever they needed a runner to get into scoring position.