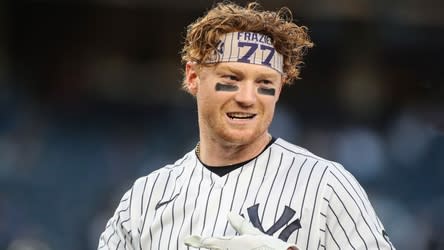 With the deadline approaching for all MLB teams to set their 40-man rosters ahead of December’s Rule 5 draft, the Yankees made a handful of roster moves on Friday, which included designating Clint Frazier, Rougned Odor, and Tyler Wade for assignment.

The Bombers also traded RHP Nick Nelson and C Donny Sands, both of whom had been on the Yankees 40-man roster, to the Phillies for INF T.J. Rumfield and LHP Joel Valdez, two lower-level prospects who are both just 21 years old.

Frazier, now 27, was one of the key pieces acquired by the Yankees in the 2016 trade that send Andrew Miller to Cleveland. The fifth overall pick in the 2013 draft, Frazier came to the Yankees with lofty outside expectations surrounding him, but he never quite reached them. In 228 major league games, Frazier slashed .239/.327/.434 with 29 homer runs and 97 RBI. He played 66 games this past season before he was sidelined with what was initially diagnosed as vertigo, which caused him to miss the rest of the season.

Odor, a powerful left-handed-hitting second baseman, was acquired by the Yankees in early April of this past season. He played in 102 games for New York, slashing .202/.286/.379 with 15 homers and 39 RBI.

Wade, 26, proved to be a very versatile and valuable piece for the Yankees in 2021, playing all over the diamond. In 103 games, Wade slashed .268/.354.323 last season with 17 steals in 23 attempts. Wade was often used by Aaron Boone as the team’s primary base-stealing option of the bench.

Nelson, 25, was drafted by the Yankees in the fourth round of the 2016 draft, making 22 major league appearances over the last two seasons. In total, Nelson racked up 35.0 big-league innings with a 6.43 ERA, 40 strikeouts, and 27 walks.

Both Rumfield and Valdez are 21 years old and have played much lower in the minor league ranks. Rumfield made his pro debut with Low-A Clearwater this past season, while Valdez spent the 20221 season in the Dominican Summer League.