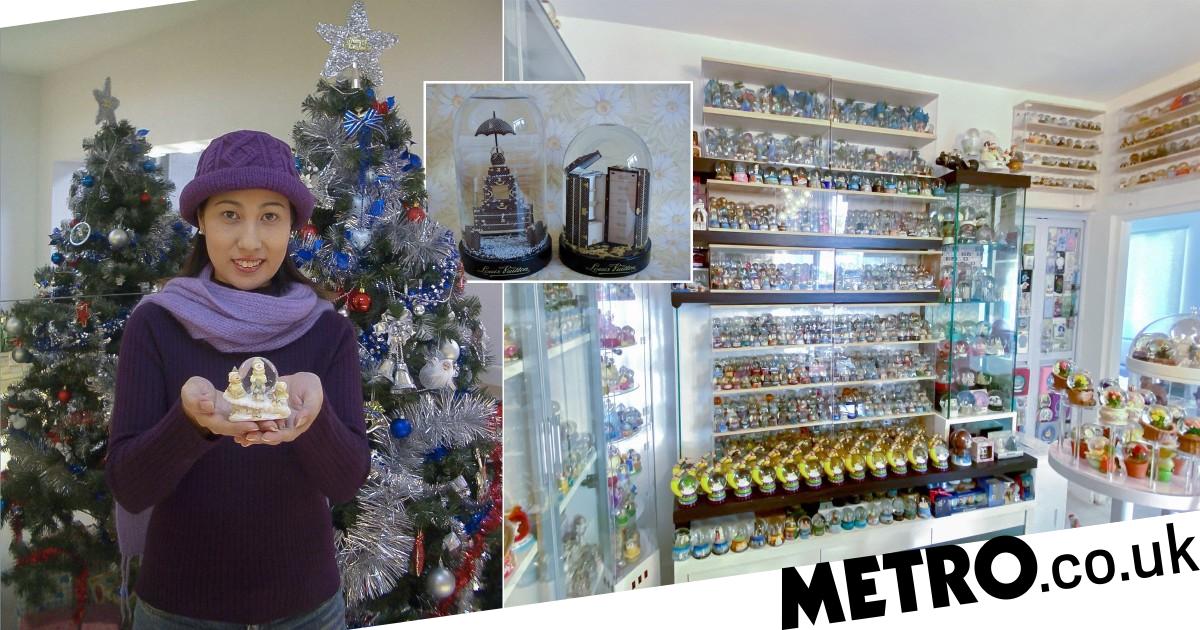 Wendy Suen, 50, has been collecting snow globes for 20 years.

After all this time, Wendy’s had to slow down with buying any more due to the fact that there’s no room in her house for more.

Her love for snow globes started when her husband Raymond Chung, also 50, bought her her very first one.

She recalled: ‘It’s a cat snow globe with a “mouse” inside the globe, but it’s a 24-carat gold computer mouse, which makes it thoughtful.

‘I am a cat lover, and my husband, then boyfriend when he gave me the globe, was born in the year of the mouse.’

Formerly her very favourite globe, it’s only recently been supplanted after she designed her own one of a baby sleeping under a moon.

She said: ‘In the early days, I did not have that many globes, so I focused on quantity – the more, the merrier.

‘But when my collection got to around 3,500, I was running out of space to feature them in my snow globe room.

‘So instead of buying any globe, even ones in the dollar shop, I am now only attracted to globes with better craftsmanship, prettier looks, more creative designs, or a discontinued globe that is rare.’

Wendy keeps all her snow globes in a designated 200 square feet room in her home in Hong Kong, China.

She has custom-made shelving units on every wall, and rotating display cabinets to separate the globes by categories such as cartoon characters, Disney, designer brands, animals and sports.

Perhaps unsurprisingly given there’s so many, Wendy has only altered the layout five times in her 20 years of collecting and cleans them once a year – a task that takes her a whole week.

She likes to play music while she admires them, shaking them up and even dancing with them.

She said: ‘A snow globe is a symbol of love, it all started when my husband bought me a snow globe, and it was love at first sight for me.

‘I started to look for snow globes whenever I shop, and in every trip when I travel, I have a goal to search for globes, to bring a piece of that place back home.

‘It gives me a purpose.’

Wendy set the first Guinness World Record in this niche in 2005 when she had a collection of only 904 globes.

‘My husband, parents and best friends are all supportive of me collecting snow globes and often buy them when they see anything interesting,’ she explained.

‘Of course, they will share the photo of the globe with me to check if I already have it before they make a purchase.

‘Whenever they see a globe, even if they don’t buy, they will take a photo and share, always thinking of me.

Wendy’s largest globe weighs eight pounds, but her most valuable one was made by Louis Vuitton, which has a small tower of designer trunks and an umbrella at the top.

Once, Wendy got an offer from someone to buy her entire collection, but of course, she turned them down.

She said: ‘Whenever I see a new globe that I don’t already have and matches my selection criteria, I have the urge to get it.

‘It just excites me to add them into my collection, the satisfaction of finally completing an entire set is so pleasing beyond words.

‘I have arranged and displayed my globes into zones with different themes, so my snow globe room is filled with beautiful colour globes.

‘I have created a snow globe museum and whenever I am feeling down or bored, I will take some time to look at my different globes.

‘Looking at different globes remind me of the many memories I have in life.

‘Snow globes take me away from reality and let me escape a little from stress, and bring me back down memory lane.’

In March last year, Wendy and bank relationship manager Raymond moved from Shanghai to Hong Kong, which meant every single snow globe had to be packed and moved with them.

It took nine people two whole days to put them in 70 boxes. While a few broke on the way, fortunately, Wendy knew how to fix them herself.

She may have slowed down with buying the globes, but she’s also branched out into the world of snow globe memorabilia, with things like themed coasters, phone cases and hats.

Wendy admits there could be people out there who’ve got bigger collections than her, but she isn’t afraid of losing her Guinness World Record.

‘I guess they find it too troublesome to go through all the process to beat me,’ she said

‘Even if I am no longer the record holder, I will always be the one who set the record, and that is good enough for me – always memorable being the first.

‘Now that I am still the record holder, it has been an honour, and it brings me lots of fun experiences.

‘As I have been associated with snow globes for over 20 years, snow globes have become me.

‘You don’t get many chances to be associated with something so beautiful in your life.’


MORE : Meet the man with a collection of over 100 Christmas jumpers