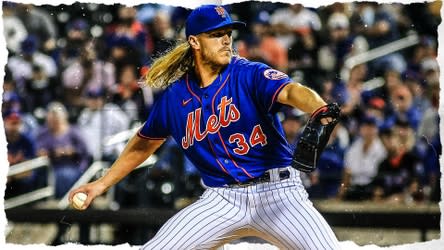 After the Mets extended the qualifying offer to Noah Syndergaard, who had hinted very strongly that he would accept it, it felt like close to a done deal that Syndergaard would be back with the Mets in 2022.

Throughout the season, Syndergaard repeatedly stated his desire to return to the Mets, and his comments specifically on the potential of receiving — and accepting — the QO made it seem highly unlikely that he would turn it down.

The above made what happened on Tuesday morning shocking, with Syndergaard agreeing to a one-year deal with the Los Angeles Angels worth $21 million.

With the qualifying offer being worth $18.4 million, Syndergaard bolted the Mets for an extra $2.6 million.

And it can be assumed that the Mets had their number on Syndergaard and wouldn’t cross it for a pitcher who has barely pitched since 2019.

But the more pressing matter is that Syndergaard not being part of the Mets in 2022 throws their rotation into further disarray — though it also creates an opportunity to spend that $18.4 million elsewhere.

As things currently stand, Jacob deGrom, Carlos Carrasco, and Taijuan Walker are the three expected members of the 2022 starting rotation.

If deGrom, Carrasco, and Walker are all healthy and perform to their capabilities in 2022, that’s a strong top three.

But the problem, of course, is that there’s a giant question mark attached to deGrom with him having not pitched after July 7 last season due to an elbow injury.

Meanwhile, Carrasco dealt with both injury and ineffectiveness in 2021 (and had minor elbow surgery after the season), and Walker struggled badly in the second half — perhaps due in part to the huge increase in innings he had.

Beyond deGrom, Carrasco, and Walker, the Mets’ internal rotation options include David Peterson and Tylor Megill.

While Syndergaard would’ve been a bit of an unknown in 2022, he would’ve given the Mets a high-upside starter who could’ve pitched near the top of their rotation.

Addressing the starting rotation already should’ve been the Mets’ top priority this offseason before Syndergaard spurned them. Now, they must add at least two starting pitchers from outside the organization, one of whom needs to be a top of the rotation arm.

So, who should they target?

As I wrote on Monday, the Mets’ top free agent target should be Max Scherzer.

Whether Scherzer is willing to pitch in New York remains to be seen. But if he is — and his agent, Scott Boras, told SNY’s Andy Martino that Scherzer’s decision won’t be based on geography — the Mets need to do everything in their power to lure him to Queens.

The Mets should also be making a strong push to re-sign Marcus Stroman.

If the Mets can land Scherzer and Stroman, that would be ideal. If they get only one of them or neither, other free targets should include Kevin Gausman, Carlos Rodon, and Jon Gray, all of whom are not attached to the qualifying offer.

In the event the Mets change their current thinking and decide they’re willing to sign a player who is attached to the QO, Justin Verlander could make sense. But it’s hard to see the Mets taking a chance on Verlander after letting Syndergaard go.

There’s also the possibility of addressing the rotation via trade.

Potential trade options include Cincinnati Reds ace Luis Castillo and quite literally any starting pitcher on the rebuilding Oakland Athletics.

But Sandy Alderson recently said the Mets prefer to build through free agency right now. And building though free agency at the moment is prudent, with the Mets’ farm system top heavy and them not being in great position to deal key pieces.

So it’ll likely be free agency for the Mets as they look to address the starting rotation.

And with Syndergaard gone, fixing a rotation that already needed reinforcements has become even more imperative.