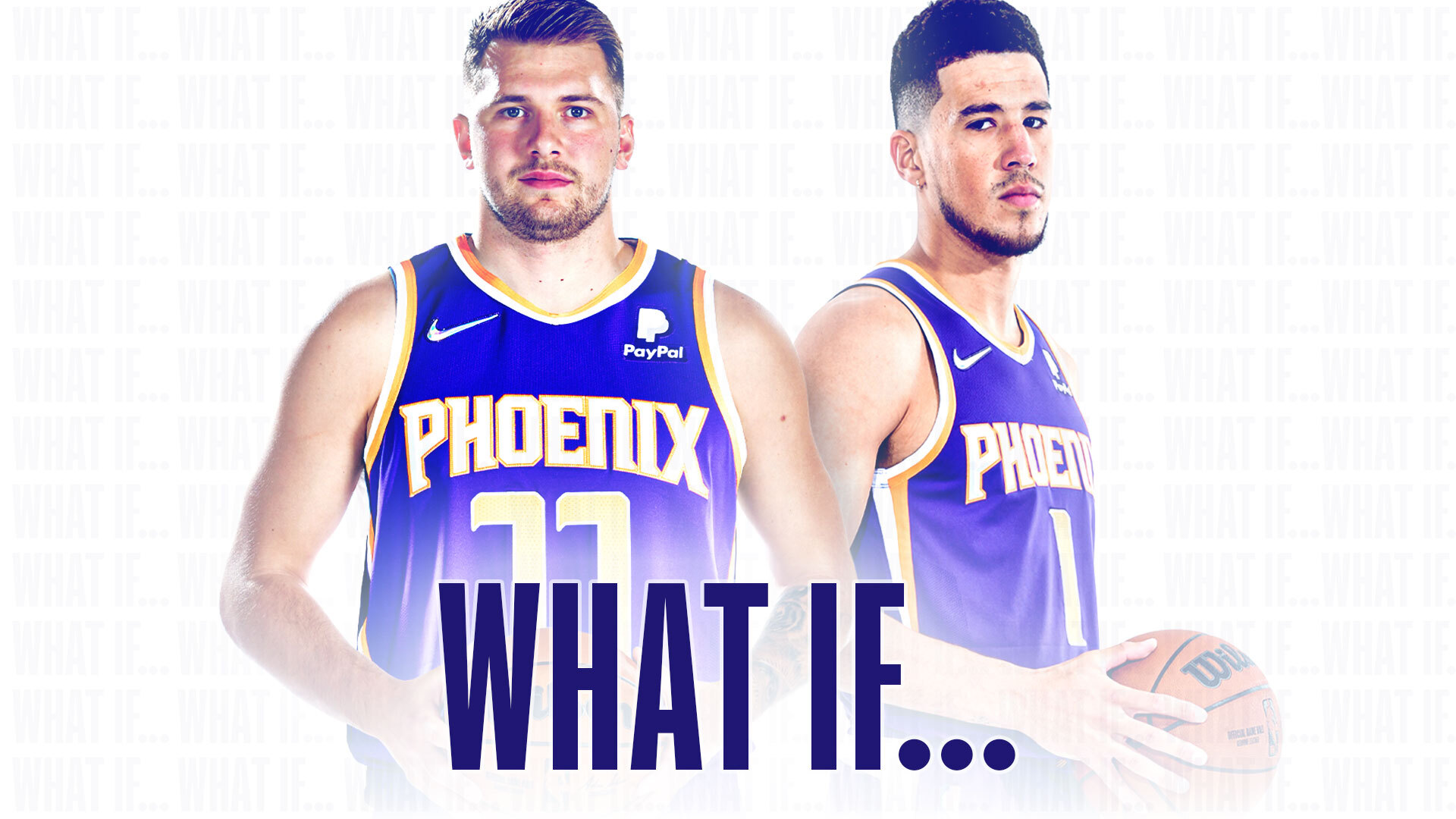 Leading up to the 2018 NBA Draft, Luka Doncic dominated the discussion.

A standout in Europe for years as a kid playing against men, Doncic seemed to be a surefire future NBA star.

Debuting for Real Madrid as a 15-year-old, it took all of two seasons as a professional before he led the team to the EuroLeague title, claiming EuroLeague MVP honors in the process.

Four years on, Doncic is a legitimate MVP candidate, with many wondering how and why he slipped through the Suns’ fingers.

Despite flashing the obvious talent of a potential No. 1 overall pick, ESPN’s Jonathan Givony highlighted some of the potential challenges that International prospects face.

“With as small as the world has become, and even though we have more film and information at our fingertips than ever, I still believe that international players are at a disadvantage in the NBA draft process compared with their NCAA peers,” Givony wrote.

“There is simply a comfort level and a familiarity for NBA teams in scouting college players that internationals don’t enjoy. Most NBA execs will get over to Europe once or twice, and what if you happen to fall on one or two bad games?”

Of course, America has produced endless top picks that have failed to reach expectations, but perhaps the international prospects are more memorable. Andrea Bargnani comes to mind, the No. 1 overall pick from the 2006 Draft. Or even Ricky Rubio, who similarly to Doncic, had carved out an impressive resume as a teenager in Europe. Now in season 11 in the NBA after being taken with the No. 5 pick in the 2009 NBA Draft, Rubio has had a successful pro career without doubt, but he hasn’t reached the All-Star level that many once hoped he would.

Prior to the Draft, there were some question marks whether or not Doncic would want to play for Sacramento, Atlanta or Memphis, who held the selections immediately after Phoenix. Of course, Doncic would have the option to continue playing in Europe after Draft night and not make his way to the NBA.

With Phoenix firming on selecting Deandre Ayton with the first overall pick and Doncic reportedly distancing himself from Atlanta, the Hawks began conversations with the Mavericks.

What followed was a blockbuster trade that saw Doncic end up in Dallas, with Trae Young heading to Atlanta.

“[Dallas] been talking to me,” Doncic told the ESPN/ABC broadcast on Draft night. “They were so nice to me. And I’m glad, you know? Just happy to be in the NBA. Just happy to be a part of that.”

Adding to the intrigue was the presence of Phoenix head coach Igor Kokoskov, who had close knowledge on Doncic’s talents as the head coach of the Slovenian national team. Kokoskov was fired in April of Ayton’s rookie season. After returning to Europe for a stint, he is now on the staff in Dallas…once again working with Doncic.

Why did Phoenix select Ayton?

While the obvious guard comparison between Doncic and Young will be equally evergreen, the biggest question that remains is why the Suns chose a center in an era where the traditional big man’s importance has seemingly waned?

Givony was on the money with his pre-lottery analysis, reporting that Ayton was firming as the likely top selection.

“After canvassing most of the league in recent weeks, there seems to be somewhat of a consensus forming around Ayton as the ‘safe pick’ at No. 1,” Givony wrote.

“Which team ends up getting the pick will obviously play a role, but Ayton’s sheer productivity combined with his freakish physical tools are making it increasingly difficult to keep Luka Doncic up top, especially after a somewhat lackluster month of February by his standards.”

It’s no knock on Ayton, who was a premier prospect, but for a Phoenix franchise that had been out of the playoffs for several years, the idea of taking the ‘safe pick’ feels like a disappointing approach. At the time, the Suns lacked a franchise point guard, with a mix of players from Tyler Johnson, Isaiah Canaan and Elie Okobo picking up starts throughout Ayton’s rookie campaign.

Interestingly enough, international prospect Okobo, who was once thought of as a potential first-round selection was taken with the 31st pick out of France. He is no longer in the league.

Is it possible the Suns were shying away from using another top selection on an international player given just two drafts earlier they had used the fourth overall pick on Croatian talent, Dragan Bender?

Bender would play just 171 games with the franchise across three seasons, averaging 5.3 points and 3.8 rebounds.

Speaking with Basketball Network, former scout, Antonio Williams discussed part of the decision-making process when it came to moving towards Ayton ahead of Doncic or Young.

“With Deandre, one of the things was, you look at the things that he does, at his size when you combine the athleticism and the dexterity and the agility there are just things he can just roll out of bed and do,” Williams said.

“Of course, we knew Luka and Trae Young were going to be great, but when we’re looking at Deandre again, there are just things that we felt he inherently can just roll out of bed and do that we didn’t have on our roster.”

In many ways, the comparison between Ayton and Doncic was always going to be skewed. Doncic had the ball in his hands from opening night as a ball-dominant guard, while Ayton would ply his trade battling in the paint, working as a screen and roll man with Booker.

The young Suns finished Ayton’s rookie campaign with a 19-63 record, though the big man impressed by averaging 16.3 points and 10.3 rebounds.

Doncic was box office from game one, finishing the season tallying 21.2 points, 7.8 rebounds and 6.1 assists on a Dallas team that finished 33-49.

From night one it was clear Doncic is a franchise-changing talent, immediately sparking the discussion on how he slipped through the fingers of multiple franchises.

The Suns would eventually find their point guard, trading for Chris Paul in a move that sparked a surprising run to the 2021 NBA Finals. Ayton was at times spectacular through the postseason run, producing a monster 22-point, 19-rebound effort in Game 1 of the Finals against Milwaukee.

MORE: Deandre Ayton is a mismatch nightmare in the pick-and-roll

Ayton’s emergence on the biggest stage is further indication that Phoenix got a really, really good player on the night of the 2018 NBA Draft, which led many to believe he was in for a major payday.

On the back of that breakout playoff run, Ayton loomed as the next player from the 2018 class to cash in with a major payday.

Young also inked a five-year extension that can climb up to a value of $207 million with an All-NBA extension in the allotted time frame.

Ayton on the other hand, could not come to an agreement with Phoenix on an extension, with ESPN’s Adrian Wojnarowski reporting that ownership does not believe he is on the same tier as Doncic, Young, Shai Gilgeous-Alexander and other classmen that have received big-time contracts in the offseason.

“I mean, obviously, we’re disappointed that we couldn’t reach an extension agreement this offseason,” Suns General Manager James Jones told The Athletic’s Sam Amick. “Deandre is important for us. He means a lot to us and was vital in what we did and what we’ve done this past season.”

Last month, the team came to terms on a four-year, $90 million deal with versatile wing Mikal Bridges. Bridges joins Devin Booker as a core piece locked up for the future, with Paul also inking a four-year deal worth up to $120 million in August.

Whether it be the Suns trio of Paul, Booker and Bridges, or the 2018 draft class of Doncic, Young and Gilgeous-Alexander, the collection of talent cashing in on major paydays all have something in common.

They aren’t a center.

Ayton will now have the opportunity to sign an offer sheet with a rival team next offseason as a restricted free agent.

The failure to lock down Ayton caused many Suns fans to blame owner Robert Sarver, with the Suns a non-luxury tax team since 2010. Coming off a run to The Finals, potentially straining a relationship with your No. 1 overall pick from three years earlier is certainly a curious decision.

The 23-year-old has gotten off to an injury-interrupted start to 2021-22, appearing in just six games while battling with a leg contusion. A consistent double-double player as he has been throughout his career, Ayton is averaging 14.2 points, 11.3 rebounds and 1.2 assists per game thus far.

Ayton is sure to become one of the talking points of the 2022 free agency period, with the rising big man’s relationship with the franchise seemingly tested through last summer’s failed contract negotiations.

Now we wait for the next chapter of the 2018 Draft night story to unfold.