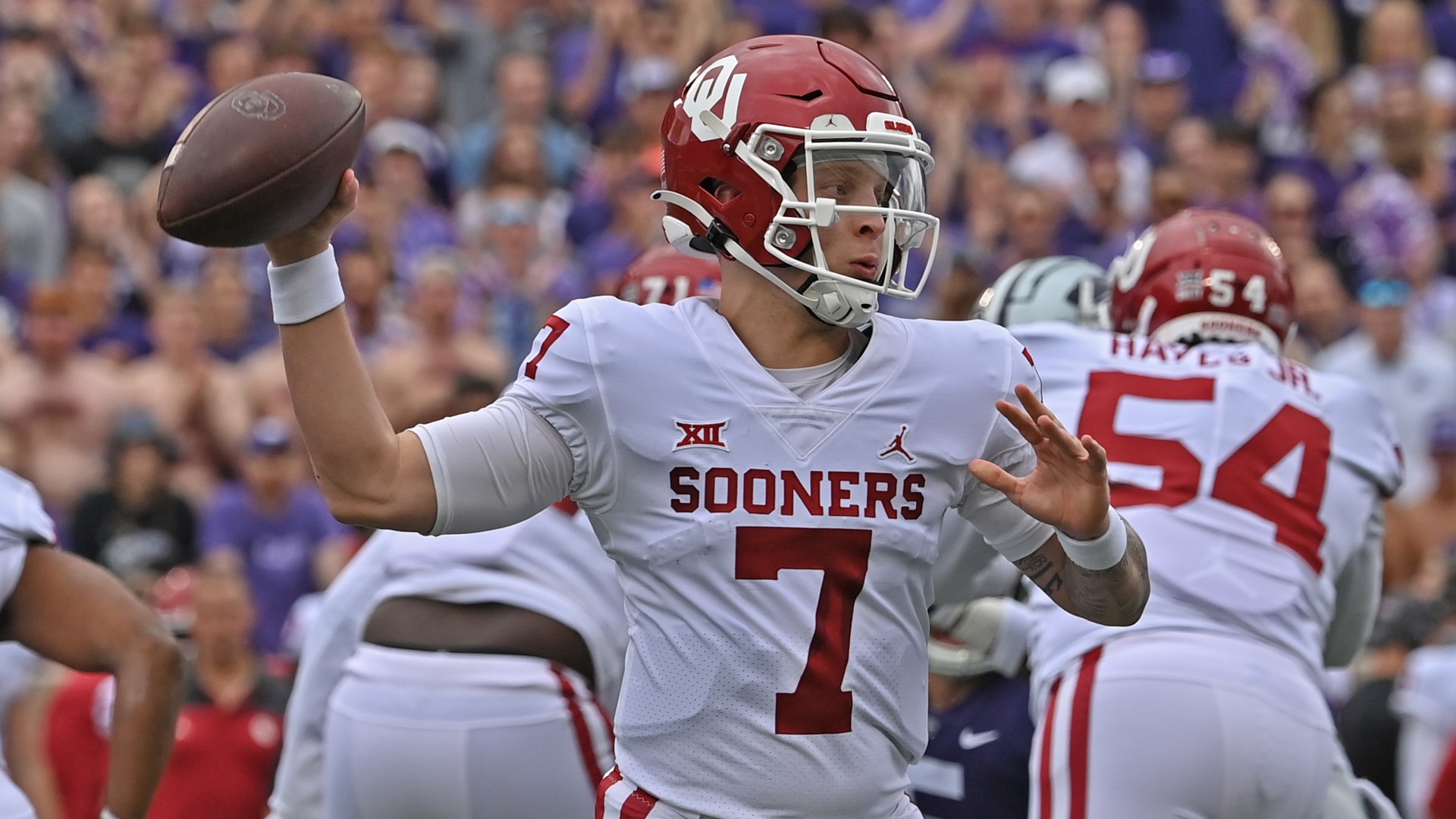 Spencer Rattler came into the 2021 college football season as the starting quarterback for Oklahoma, the favorite to win the Heisman Trophy and a candidate for the No. 1 pick in the 2022 NFL Draft.

By midseason, he was no longer any of those things. Now, he’s not even a member of the Sooners program.

Rattler announced on Monday that he would be transferring away from Oklahoma. This seemed like a foregone conclusion. After all, he had lost his starting job to freshman Caleb Williams and would have had a hard time winning it back even despite the stunning departure of coach Lincoln Riley.

Instead, Rattler will look elsewhere to rebuild his career. He needs a fresh start and can get one without facing the uncertainty that Oklahoma is currently facing.

Rattler, the former consensus No. 1 quarterback prospect in the 2018 recruiting class, should have plenty of suitors. That said, his top goal should be to find a program that will give him every opportunity to improve his NFL draft stock. Winning would be nice, but living up to expectations is more important for Rattler than anything else.

Which programs could be the best fits for Rattler? There is a handful that he already has connections to that could make sense. Meanwhile some other programs with experienced coaches could be good fits as well.

Here’s a look at some of Rattler’s best potential fits, starting with a school that will be mentioned ad nauseam as long as Rattler is on the market.

Look, let’s just get this one out of the way since it seems like one that will be asked about constantly. Could Spencer Rattler transfer to USC? Sure, it’s possible. He does have a connection to Lincoln Riley and the coaching staff taking over the Trojans program.

However, there are a couple of issues with that. First and foremost, Riley benched Rattler in favor of talented freshman Caleb Williams to spark Oklahoma and attempt to save its season. That may not sit well with Rattler if he’s looking for a fresh start.

Also, the Trojans have Jaxson Dart on their roster. He was a true freshman in 2021 but still posted decent numbers — 61.3 completion percentage, 1,162 yards, eight touchdowns and five interceptions in five games — despite the turmoil surrounding the program after Clay Helton’s departure. Rattler may not want to compete with Dart in a situation that could be very similar to what he dealt with at Oklahoma with Williams.

BENDER: Lincoln Riley will bring the elite QB back to USC in a hurry

Ole Miss would be a much better fit for Rattler than USC. He would have a chance for a fresh start with a new coaching staff and he would learn from another of the great offensive minds in college football.

Lane Kiffin has turned the Rebels into one of the better teams in the SEC in just two short years. They had top-20 scoring offenses in each of his first two seasons in Oxford and Matt Corral has blossomed into a Heisman Trophy candidate and likely first-round pick in the 2022 NFL Draft.

Rattler can look at the success Corral had as his potential ceiling. They were both top-five quarterback recruits in the 2018 class, but Rattler — the consensus No. 1 quarterback recruit in that class — ranked ahead of Corral. To date though, Corral has had more consistent success.

As a redshirt junior, Corral has completed 68.3 percent of his passes for 3,333 yards, 20 touchdowns and just four interceptions. He also has run for 597 yards and 11 touchdowns. Those numbers somewhat mirror what Rattler did as a redshirt freshman starter, so perhaps he’ll believe Kiffin and the Rebels staff are the right choice to get him back on track.

The Ducks have some young talent at quarterback. They had four freshmen at the position among the six quarterbacks listed on their roster. That should bode well for them in the future but if they need a starter now and aren’t comfortable with what they have, Rattler would be a sensible pick.

Oregon got solid play out of graduate transfer Anthony Brown this season. He was meant to help replace Justin Herbert in 2020 but spent the season backing up Tyler Shough. This year, he showed his skills and maintained a 16-4 TD-INT ratio and completed 64.5 percent of his passes.

If Brown represents experience, the rest of the Oregon quarterbacks… don’t. In fact, they have combined for just 18 career pass attempts. So, if Mario Cristobal believes Ty Thompson and Jay Butterfield need more time to develop, Rattler would represent a high-ceiling option with starting experience and 515 career pass attempts under his belt.

For Rattler, the fit would be nice, as he’d get to work behind a solid offensive line in an offense that has traditionally featured an abundance of playmakers. Oh yeah, he also would get a chance to slow Riley’s rise at USC if revenge is something in which he would be interested.

The Gamecocks had to start Zeb Noland at quarterback at one point last season. He was supposed to be a graduate assistant on the school’s coaching staff. Needless to say, that’s not ideal!

Even if Luke Doty comes back after missing most of the season due to injury, South Carolina needs quarterback depth. Rattler would be a big upgrade for them and he would have a chance to compete in the SEC, so this could be a win-win scenario for the two parties.

It also helps the Gamecocks’ cause that their coach, Shane Beamer, spent three seasons at Oklahoma before taking the South Carolina job before the 2020 season. As such, he and Rattler are familiar with one another — they worked together for two seasons — so that relationship could give the Gamecocks an edge in the recruiting battle.

Don’t sleep on South Carolina. It could prove to be the perfect opportunity for Rattler. He could show his mettle battling some of the best SEC teams and if he succeeds, he could set his draft stock ablaze again.

OKLAHOMA: Why Bob Stoops is stepping in to replace Lincoln Riley

You don’t have to look far back to find an example of a former Oklahoma quarterback finding success at SMU. Tanner Mordecai, the current starter for SMU, spent the first few years of his career with the Sooners. He transferred to SMU as a redshirt junior and posted a 67.8 percent completion rate for 3,628 yards, 39 touchdowns and 12 interceptions.

Granted, Mordecai’s production came under the pass-happy Sonny Dykes. He will be moving on to TCU after the season, but Rhett Lashlee is going to take over as the Mustangs head coach. Lashlee is a former Broyles Award finalist when he was at Auburn in 2013 and has extensive offensive experience. He was the offensive coordinator for SMU in 2018 and 2019, so he will be able to keep the team’s high-powered offense humming.

Playing at a Group of 5 school could be ideal for Rattler. The competition is a bit weaker, but the Group of 5 schools still generate plenty of pro prospects. Rattler could use this opportunity to get back into a rhythm, and if he can dominate at that level, he could get back in the first-round conversation again.

SMU checks a lot of boxes. Good coaching, good talent and a schedule that would benefit Rattler. Expect them to be a contender for his services.

MORE: Kliff Kingsbury denies speculation that he will leave Cardinals for Oklahoma

The Wildcats haven’t had a winning season since 2017 during Rich Rodriguez’s last season as the team’s head coach. They have only had one 10-win season over the last 20 years, and they just posted a 1-11 record in Jedd Fisch’s first year as head coach.

Why would Rattler want to go to Arizona? Simple: an opportunity to turn a program around in his home state.

Rattler is from Phoenix and played collegiately at Pinnacle High School. He threw for more than 11,000 yards during his college career and was named an Elite 11 prospect as a result of his strong performance. Perhaps a return home could spark him, and it’s not like Arizona has a proven quarterback on the roster.

Playing for Fisch is an intriguing proposition as well. He has coached for seven different NFL teams and was an offensive coordinator for two years with the Jaguars in 2013-14. He has experience working under Sean McVay and Bill Belichick in recent years before becoming a head coach, so he knows what it takes to find NFL-level success. That, plus Fisch’s NFL connections, could appeal to Rattler as he looks to round back into form.

Sean Clifford is a redshirt senior, so his time in college football is coming to an end. The Nittany Lions have a talented-looking freshman in tow, Christian Veilleux, who threw three touchdown passes in Penn State’s game against Rutgers, so he could be the future for the program.

But is Penn State ready to trust Veilleux? After all, they had Ta’Quan Roberson listed ahead of him to begin the season, and Roberson struggled immensely as a passer when pressed into action against Iowa.

If Penn State doesn’t want to trust Veilleux and Roberson to take over the program, bringing in Rattler could make sense. He would be an upgrade and would buy Veilleux another year to develop into a quality starter under James Franklin. Meanwhile, Rattler would get to play some tough Big Ten defenses and show off his passing chops in a conference that usually doesn’t boast a ton of quarterback talent.

And being coached by Franklin, who signed a long-term extension and isn’t planning on leaving the program any time soon, and offensive coordinator Mike Yurcich certainly could be attractive to Rattler.

The Tar Heels may not look like a perfect fit for Rattler on paper, but they’re an interesting wild card. His candidacy here would all depend on what Sam Howell decides to do.

Howell is a true junior, so he could return to school if he wanted. That said, he is likely to be one of the first quarterbacks off during the 2022 NFL Draft. If he believes he’ll be a first-round pick, he may pack his bags and leave Chapel Hill.

If that happens, Mack Brown will have a couple of options. He can turn to Drake Maye and Jacolby Criswell to lead the program, or he can bring in a more experienced player. Maye is likely the future of the program, but he’s just a freshman right now. Brown might not believe he’s ready in which case Rattler would be a great bridge option for him.

Brown is a respected, established coach who was the last man to have Texas featured as a legitimate contender on the national stage. He could get the most out of Rattler and turn him into a quality pro prospect, so the Tar Heels shouldn’t be ruled out even if some other options on this list are a bit more likely.