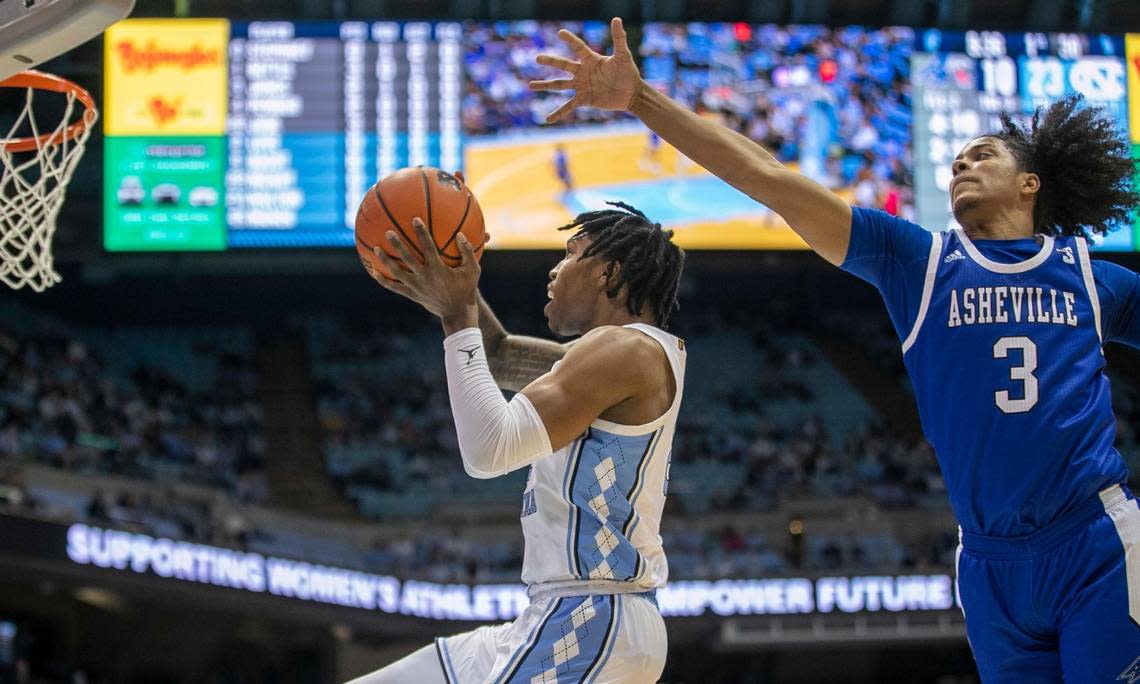 North Carolina cruised past UNC Asheville 72-53 in the Dean E. Smith Center on Tuesday, but the Tar Heels are still very much looking to play a complete game.

As is the case when playing an overmatched opponent, Carolina (4-2) jumped out to a 20-point lead at 35-15 in the first half and then seemed to lose a bit of its edge, if not its interest.

UNCA battled back, including a spurt to start the second half, pulling within 45-38 with 12:38 left in the game. The Bulldogs had the ball with a chance to make it a two-possession game, but Drew Pember’s 3-pointer was long.

Armando Bacot, who scored a game-high 22 points, scored the next nine points for Carolina to boost the lead back to 14, and the lead never dipped below double digits for the remainder of the game.

Here’s what we learned:

UNC coach Hubert Davis wasn’t too pleased with how the Tar Heels played defensively in their Sunday loss to Tennessee. But, just as he promised after that game, the Heels did show improved effort defensively against Tuesday the Bulldogs.

Asheville began the game shooting 2-for-13 and would finish the first half shooting 27% from the floor. That was Carolina’s season-low for an opponent in any half this season. And the Heels managed to improve off of that in the second half, holding UNCA to 25.7%.

Effort doesn’t necessarily mean execution, though. The Bulldogs entered the game with a turnover percentage of 21.6, meaning roughly one of every five possessions ended in a turnover. The Heels only managed to force seven turnovers, which was a season-low for the Bulldogs.

Carolina still doesn’t value the ball like it should. Despite running out to a 20-point lead in the first half, the Heels allowed UNCA to stay close in the second half with eight turnovers in the first eight minutes.

It’s been a recurring theme dating back to last season for UNC, and there’s no easy fix considering every player in the core nine-man rotation that Davis used had at least one turnover.

Many of those turnovers were unforced, too, like the opening possession of the game when the Heels worked the ball around ending in a shot that Bacot didn’t get off in time. They were called for a shot-clock violation. The next possession, Bacot’s baseline pass to Caleb Love was thrown so high that a 7-footer may have had trouble catching it.

UNCA did use a full-court trap, but it hasn’t been a team that’s caused a lot of turnovers this season. Their turnover percentage on defense was just 17.7 entering the game, which ranked 254th nationally.

Carolina finished with 18 turnovers, 11 of which came in the second half.

Still not much from the freshmen

These are supposed to be the kind of games that Carolina could work in freshmen Dontrez Styles and D’Marco Dunn. Neither has played much this season, although Davis said in a video conference prior to the Hall of Fame Tipoff that he needed to start working them into the lineup more along with Anthony Harris.

Dunn did make his first 3-pointer on the season when he did enter the game with less than two minutes to play. Styles had an opportunity to play against Purdue for a short spell. But with one game left in the month, it’s still largely unknown what both Styles and Dunn can add to the rotation.