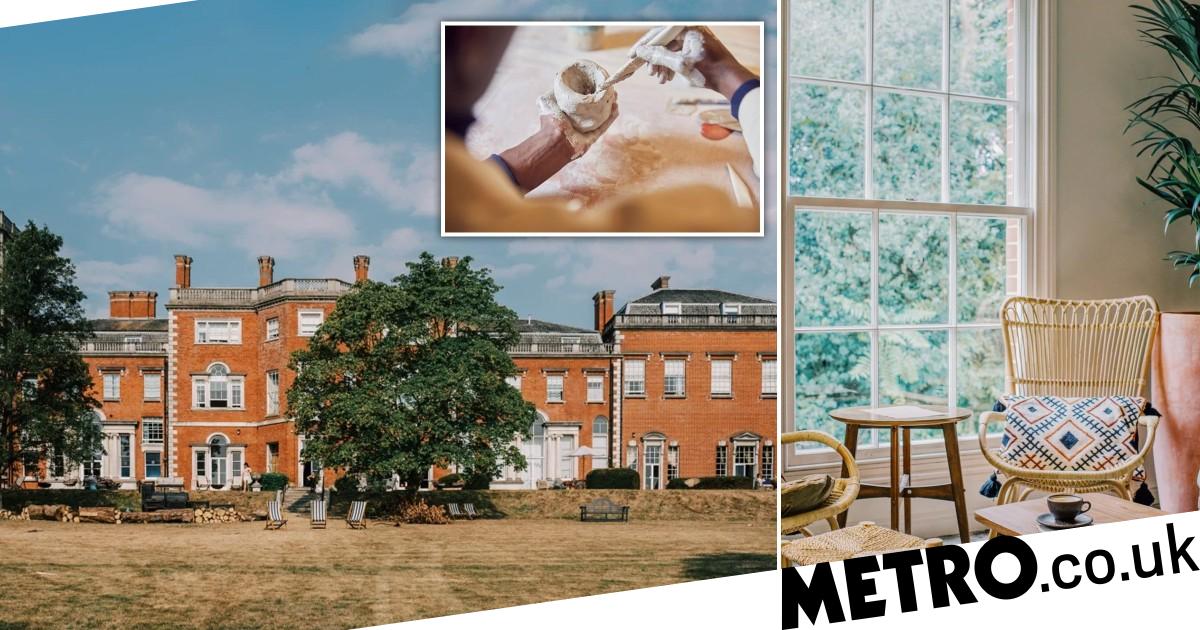 It’s three o’clock in the afternoon, I’ve got a large gin and tonic by my side and I’m laboriously trying to make a limp length of clay magically turn into a pot.

Despite a couple of hours under the expert tuition of ceramicist Bryony Applegate, it’s safe to say my boyfriend and I aren’t likely to give Demi Moore and Patrick Swayze’s sexy scene at the potter’s wheel in Ghost a run for its money any time soon.

We emerge with a couple of misshapen, ashtray-like creations and something I’m going to pass off as a pen holder.

Birch, which sits just off the M25 in Waltham Cross, is no ordinary hotel. For one thing, it describes itself as a ‘community’ and for another, its mantra is ‘looks like a hotel, feels like a festival’.

On arrival, it does indeed feel like you’ve rocked up to the type of country pad owned by a member of a 1990s Britpop band – all red brickwork, multiple chimneys, lion statues, tipis in the grounds and fairy lights strung everywhere.

Birch is actually a Georgian mansion once owned by what Wikipedia describes as ‘flamboyant and controversial figure’ Lady Valerie Meux, who sounds like a shedload of fun.

She kept zebras in the gardens, had an indoor roller-skating rink and collected ancient Egyptian artefacts.

The house went through an incarnation as a corporate hotel in the 1980s but was recently taken over by entrepreneur Chris King in partnership with the former MD of London’s hip Ace Hotel, Chris Penn.

USP: The Chris duo’s shared vision is for somewhere that blends a stylish stay with a co-working space, music events and a range of classes and workshops, from candle making and wine tasting to HIIT sessions and wild yoga (available activities are posted daily on a board by reception).

Set across 55 acres, there’s a lido, a wellness space, three bars, two restaurants, a screening room and a games room.

They’ve also restored and enhanced the original interiors: the entrance hall is covered in exquisite mosaic tiling, the walls of one staircase are painted a deep, Yves Klein blue, and there’s plenty of distressed plasterwork and buffed wooden flooring throughout.

In addition, you’ll find chickens, lambs, pigs and bees on site, plus they grow their own fruit and veg, and none of the 140 rooms have TVs so as to encourage guests to take part in what’s going on around them.

Who goes there? Freelance creatives taking advantage of the stylish remote working set-up, chic locals from nearby Hertfordshire and a scattering of boho families.

Venture out: Seriously, why would you leave?

Don’t forget your chance to win a luxury Mediterranean cruise for two!

Sign up to a brilliant travel newsletter The Getaway and you could win yourself the ultimate nautical Christmas present – a luxury cruise for two around the Mediterranean.

The prize is for sailings on a Celebrity Cruises ship between April and June 2022, which means you could spend your spring floating around the gorgeous walled city of Dubrovnik and getting your Game Of Thrones fix, or soaking up the breathtaking beauty of the Greek islands.

To find out more and be in with a chance of winning, visit metro.co.uk/getawaycomp

What are you waiting for?


MORE : What it’s like to have a Dickensian Christmas – in sunny Florida, USA