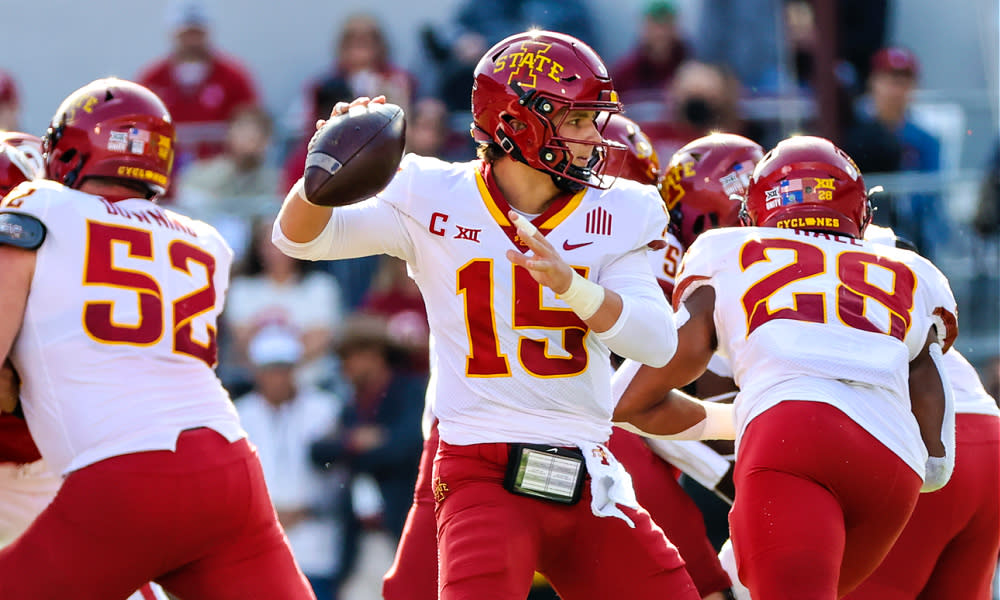 What college football games appear to be the best bets and the best picks going into Week 13? To keep the football weekend going, here are the 5 best predictions for Friday.

It might be the most underappreciated great sports day on the calendar – the Friday after Thanksgiving.

It’s not the big Saturday full of the biggest rivalry games, but it’s always a deep and interesting slate.

Warning, I’m in a punch-drunk state after consuming more calories in one day than I have over the entire season. The annual College Football 15 weight gain just kicked in over the last 45 minutes. If these picks are wrong, it’s because my too-fat fingers hit the wrong keys.

I’m also going to warn you that I’m not head over heels in love with these picks. I’m in deep like, but I’m not quite sure where this relationship is going, and there’s a reason.

Friday-after-Thanksgiving games are extremely weird and don’t often hold to form. I’ll get into that as we go.

When I say Friday-after-Thanksgiving games are weird, I primarily mean something like this.

Utah doesn’t need this- it already has the Pac-12 South won and is off to the conference title game next week. It would actually be a good thing if it just sat its starters to rest up for whatever comes from the Pac-12 North on Saturday, and it’s not going to show off anything quirky that anyone can use.

Oh, I think Utah will win – it’s Senior Day, and of course a Kyle Whittingham team will always try – but the one thing this team can’t do is get banged up or bruised with the Pac-12 Championship and Rose Bowl appearance there for the taking.

It beat Washington last week, it wasn’t bad at UCLA until the game got a bit out of control, and the win over Oregon State was a game-changer for the conference.

If Utah needed this game in any way it would ramp up the intensity and take this by the 23.5, but that’s not the case.

Call this a guess that the Utes will be more business-like and win this comfortably – like the 38-29 win over Arizona two weeks ago, with a letdown coming late – and won’t have half of the intensity it showed against Oregon six days ago.

By the way, call this a test-case theory for Pitt at Syracuse on Saturday. Pitt doesn’t need the win with the ACC Championship coming up, Syracuse at home has to win to go bowling,

NEXT: College Football Pick Against The Spread No. 4 Cincinnati at East Carolina

And fair warning, I’m probably going with Houston against the spread in the American Athletic Conference championship, too, no matter how this plays out.

Last week I was all in that SMU just wasn’t very good at college football, which was part of the reason why one of the big picks was Cincinnati covering the 11. That was never going to be the problem for the Bearcats.

Houston could be a problem, and dealing with East Carolina at home could be a big problem.

The Pirates are on a nice four game winning streak, they lost just one home game so far – a 20-17 fight with South Carolina – and they’ve got a veteran quarterback in Holton Ahlers who only seems like he was once Jeff Blake’s backup.

Ahlers is red hot – over 700 passing yards over the last two games – the team is playing with house money with bowl eligibility already locked in, and it just might have the right style to screw things up.

It controls the tempo and the clock, it’s not bad at taking the ball away, and it’s an efficient team that’s been able to hold its own in tight games.

I continue to waver on whether or not to go with East Carolina outright, and the 14 seems a tad much even if you do like the Bearcats.

The Pirates haven’t lost by more than 14 all year.

NEXT: College Football Pick Against The Spread No. 3 Kansas State at Texas

It’s been a total disaster of a second half for Steve Sarkisian and his Texas team that stopped doing that pesky tackling thing right after Oklahoma’s Caleb Williams stomped all over their hopes and dreams.

A few weeks past the total embarrassment of losing at home to Kansas, it’s time to close with some jazz hands pizzazz.

And Kansas State might be without starting QB Skylar Thompson.

A losing season is one thing, being ninth in the Big 12 is another thing, and the last win coming at TCU in early October is a whole other nightmare. Yes, really, 5-7 looks a whole lot better than 4-8.

The offense is still okay – it’s just not consistent in any way, it’s banged up, and it’s not getting a ton of help from the D – and it should be able to keep this within range, at worst, against a Kansas State team with a decent offense that’s nothing amazing.

And yes, it’s a straight-up quarterback play here. Even if Thompson is in, Texas -3 in a game like this isn’t asking for much.

NEXT: College Football Pick Against The Spread No. 2 TCU at Iowa State

TCU doesn’t do a whole lot with its defense.

Again, Friday game, it’s starting just as the Big Ten’s key Iowa-Nebraska game is ending – I’m SO trying to make a pick/call happen with the Huskers -1 in that – and the Cyclone fans should be in a fun mood for the regular season finale.

Senior Day is always a bit hard to judge – good luck trying to ever assume what kind of emotions play what kinds of roles – but this is the end of a great run for a whole lot of big-time producers for Iowa State football.

Yeah, this has been a disappointing year, but Iowa State is going bowling and will probably have a winning campaign. Now it’s about making some semblance of a statement.

TCU has won two of its last three since parting ways with Gary Patterson, but the 63-17 loss to Oklahoma State was ugly, the 31-28 win over Kansas was too tight, and the 30-28 win over Baylor was at home under strange circumstances for the program.

The Wildcat defense that doesn’t generate a pass rush and can’t stop the run is about to get hammered on hard.

On a rough run of three losses in four weeks – all on the road – the Iowa State team that handed Oklahoma State its only loss and buried Texas will go out this regular season with a bang.

And finally, get up early you West Coast wakers and bakers – waffles, muffins, you know – because …

NEXT: College Football Pick Against The Spread No. 1 Boise State at San Diego State

So you’re still not buying into the whole Friday-after-Thanksgiving football is weird, thing?

Try a 9 am local time kickoff for the No. 21 team in college football playing the biggest game of the year in front of friends and family in a “home” date two hours from campus.

San Diego State is playing in Carson while its new home stadium is being built, but that doesn’t matter now. What does matter is Fresno State’s blowout win over San Jose State on Thursday to put the pressure on the Aztecs to win this or else.

It’s simple. If San Diego State wins, it goes to the Mountain West Championship. If it loses, Fresno State goes.

Boise State probably isn’t getting in – it needs to win and hope for Air Force to lose to UNLV – but it’s about to take care of its side of business.

There was a loss in the season opener at UCF – when the Knights were fully healthy and functional – but Boise State has won every road game since, and by a whole lot.

It took down Utah State by 24, knocked off BYU by nine, and obliterated Fresno State by 26. This team has a way of locking in and playing its best away from the blue turf.

Personally, I love San Diego State. Best-smelling campus on the planet, kid will probably go there next year, and the combination of defense and running game is the exact style of college football that works for me.

But this San Diego State team just isn’t that great.

It’s been able to survive way too many close games against way too many bad teams – but, to its credit, it got by Utah, Air Force, and Arizona, too. It’s all about to finally slip the other way.

Boise State’s offense has been too balanced and it’s playing too effectively well over the last month.

By the way, happy belated Thanksgiving, everyone.