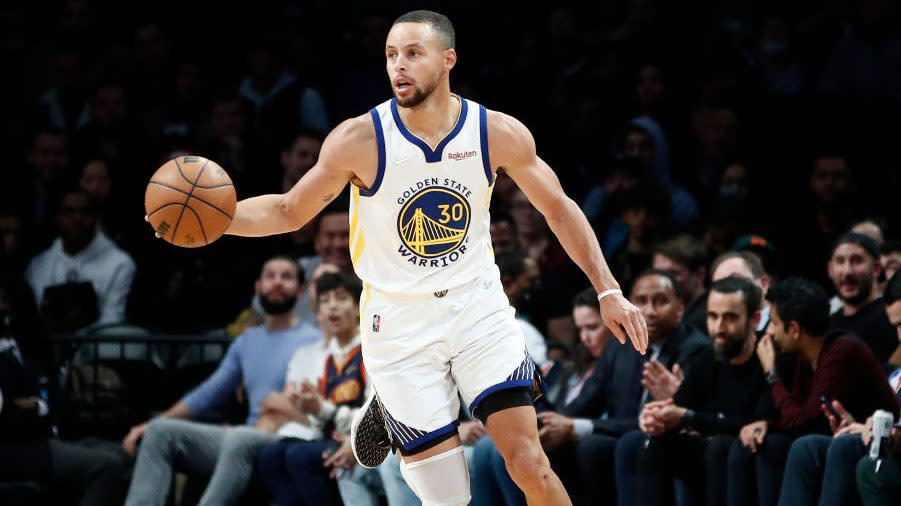 Three Things is NBC’s five-days-a-week wrap-up of the night before in the NBA. Check out NBCSports.com every weekday morning to catch up on what you missed the night before plus the rumors, drama, and dunks going that make the NBA great.

The Golden State Warriors are elite. They are in the discussion as title contenders.

Any doubts about the Warriors fast start to the season — such as “Was it just the soft early schedule?” or “Will their defense hold up against elite scorers?” — were answered emphatically Tuesday night as Draymond Green held Kevin Durant in check (as much as anyone can) and Stephen Curry drained four different threes from the Nets’ center-court logo.

The Golden State Warriors went into the Barclays Center, dominated the second half, and pulled away for an easy 117-99 win. Curry had the kind of signature game that vaults him to the top of any far-too-early MVP discussion — 37 points on 12-of-19 shooting, 9-of-14 on 3-pointers, seven rebounds, five assists, and a couple of steals. Andrew Wiggins added a quality 19 for the Warriors.

However, the real mark of a contender was the Warriors defense holding Durant, James Harden, and the Nets offense to under a point per possession through the meaningful part of the game (95.7 net rating, using Cleaning the Glass and its garbage time filter). Durant, who has played like an MVP most of the season, had Draymond Green in his face much of the night and was held to 19 points on 6-of-19 shooting, five rebounds and three assists. Durant went 0-of-8 shooting in the third when the Warriors pulled away.

The Warriors have the NBA’s top-ranked defense and are third in offense so far — as a rule of thumb, a team top-five in the league on both ends is often considered a title favorite. The only other teams in the top 10 on both sides of the ball (contender status level) so far this young season are the Jazz (1st offense, 9th defense), Heat (5th and 8th), and Bulls (7th and 5th).

The Nets aren’t there and coach Steve Nash owned that.

The Nets missed Joe Harris and his shooting. They really missed the pace and shot creation of the non-vaccinated Kyrie Irving. More than that, the Nets are still trying to find their identity in a non-Kyrie world, and at the trade deadline/buyout market need to look for more athleticism off the bench (and more shooting wouldn’t hurt).

Brooklyn has work to do to get to contender status.

Golden State showed Tuesday they are already there (and they still get Klay Thompson back in a month or so).

Evan Mobley was clearly bothered by something against the Celtics on Monday night, he shot 0-of-11 then left the game in the third quarter. Tuesday he had an MRI, and the results were not good (but could have been worse) — he is out 2-4 weeks with a sprained elbow.

In the annual GM survey, they picked Mobley — the No. 3 pick in the 2021 NBA Draft — to be the best player in this class in five years.

Mobley didn’t want to wait that long and has been the best rookie this young season. He is averaging 14.6 points and eight rebounds a game, plus playing outstanding defense for a rookie, anchoring the Cavaliers in the paint (coach J.B. Bickerstaff even played him as the disruptive top of a 1-2-2 zone at points). He has fit in as a four and can play some five, and Mobley is a key reason Cleveland is off to an unexpected 9-6 start.

For the next couple of weeks, expect Lauri Markkanen to play his more natural four, plus Kevin Love is expected to return in the coming days and can play bench minutes in that role. But for the Cavaliers and just fans of good basketball, this is a setback.

3) No more Staples Center: Lakers home to be Crypto.com Arena

The home of the Los Angeles Lakers and NHL’s Kings — and for a few more years the Clippers — will no longer be the Staples Center as of Christmas Day, it will be the Crypto.com Arena.

That’s going to take some getting used to. Sure, it’s just switching out one soulless corporation’s marketing opportunity for another, but this has been Staples Center since the day it opened, since the Shaq/Kobe era, so it’s going to take an adjustment. It’s also going to be a little awkward when the Philadelphia 76ers come to town.

On Twitter, fans have already started calling the building “The Crypt.” Which both works and is a bit ominous for an old Lakers’ roster.

To be clear, the Lakers make nothing off this. They do not own the building. AEG owns the arena, and the owner of that company, Philip Anschutz, also owns the Los Angeles Kings (plus several MLS teams and a minority stake in the Lakers). Staples Center has always been the Kings’ building with the Lakers as a primary tenant.

Multiple reports have this as a $700 million over 20 years deal for naming rights, by far the largest deal in North America. AEG bought back the last couple of years of the Staples naming rights deal to make the crypto.com deal happen, and you can bet the owners of the Barclays Center and other arenas around the league took notice. There is about to be a naming rights bubble.

Mostly, though, this new name is just going to take some getting used to.

Highlight of the night: Curry couldn’t miss even when he was playing around

Stephen Curry had one of those nights, as noted in No. 1 above, but another sign of just how hot he was that this after-the-whistle, joking around set shot went in.

Here’s more on the Warriors