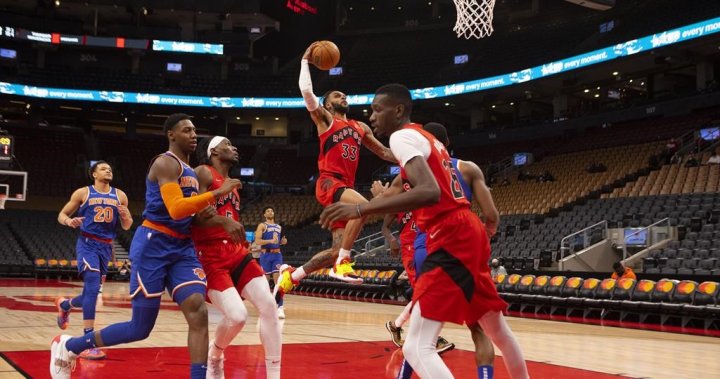 TORONTO – For Fred VanVleet, getting the band back together suited the Toronto Raptors guard just fine.

VanVleet scored a season-high 35 points in the Raptors’ 120-105 win against the depleted New York Knicks on Sunday, a game that saw all the significant Raptors healthy and playing together for the first time in the 2021-22 campaign.

The Raptors began the season shorthanded because Pascal Siakam missed the first 10 games as he recovered from off-season shoulder surgery. Then a hip injury took down OG Anunoby for a month, and COVID-19 ripped through the Raptors roster in late December.

Rookie Scottie Barnes was the last to exit the league’s health and safety protocols, and a sore knee kept him out in the Raptors win against the Los Angeles Clippers on New Year’s Eve. But he returned against the Knicks to give the Raptors a full roster.

“I think we felt good about our group all year,” VanVleet said. “I just like our spirit and our chemistry and kind of the enthusiasm that we have for the game. It’s going to take time to get it to be where we need it to be, but you would hope if we keep climbing by April and May we’ll be at our best, and that’s kind of the goal.

“To start (2022) off with everybody back, and hopefully we can run off a couple here playing good basketball, this is kinda where you want to be. We’ve just gotta continue to get better individually and collectively, and I think that we’ll be a tough team to beat if we can keep growing towards the end of the year.”

The win pushed the Raptors (16-17) past the Knicks (17-20) and into a spot for the play-in tournament at the end of the regular season.

VanVleet scored 31 points on Friday to give him 30 or more points in back-to-back games for the first time in his career. He has accomplished the feat five times this season.

Against the Knicks, Siakam was next with 20 points, followed by Anunoby’s 14 and Barnes’ 13.

VanVleet shot an efficient 11 of 17 in his three quarters of action, including a deadly 7 for 13 from beyond the three-point arc. He benefitted from having Siakam’s aggressiveness down low and having all the other talent around him.

“You just wanna have more weapons and be at an advantage at all times,” VanVleet said. “It’ll probably take some time to get the chemistry and the flow, the rhythm was a little off sometimes, but I thought we were pretty locked in for most of the game.”

The Raptors plucked their second win in a row since the provincial government decided last week to once again empty sports arenas and concert halls as a COVID-19 measure.

But playing before about 100 family members and friends didn’t deter Barnes and others from keeping the energy level high from the bench.

“I thought, in general, our team had good energy,” Raptors head coach Nick Nurse said. “They were really active from the bench. We’ve talked about creating our own energy because there’s not many in the arena, and I thought our guys really did a good job of kind of coaching and cheerleading and just supporting each other all the way.

“I would say the other night when Scottie didn’t play, he was very active and energetic on that part of it too. And that’s good spirit. And you’ve got to create your own fun sometimes.”

The Knicks were without Kemba Walker (left knee), Derrick Rose (right ankle surgery), Julius Randle and Mitchell Robinson. The latter two were added to the league’s health and safety protocols list on Thursday and Saturday, respectively.

France’s Evan Fournier led the Knicks with 20 points, followed by Canadian RJ Barrett of Toronto and Obi Toppin with 19 apiece.

This report by The Canadian Press was first published Jan. 2, 2022.