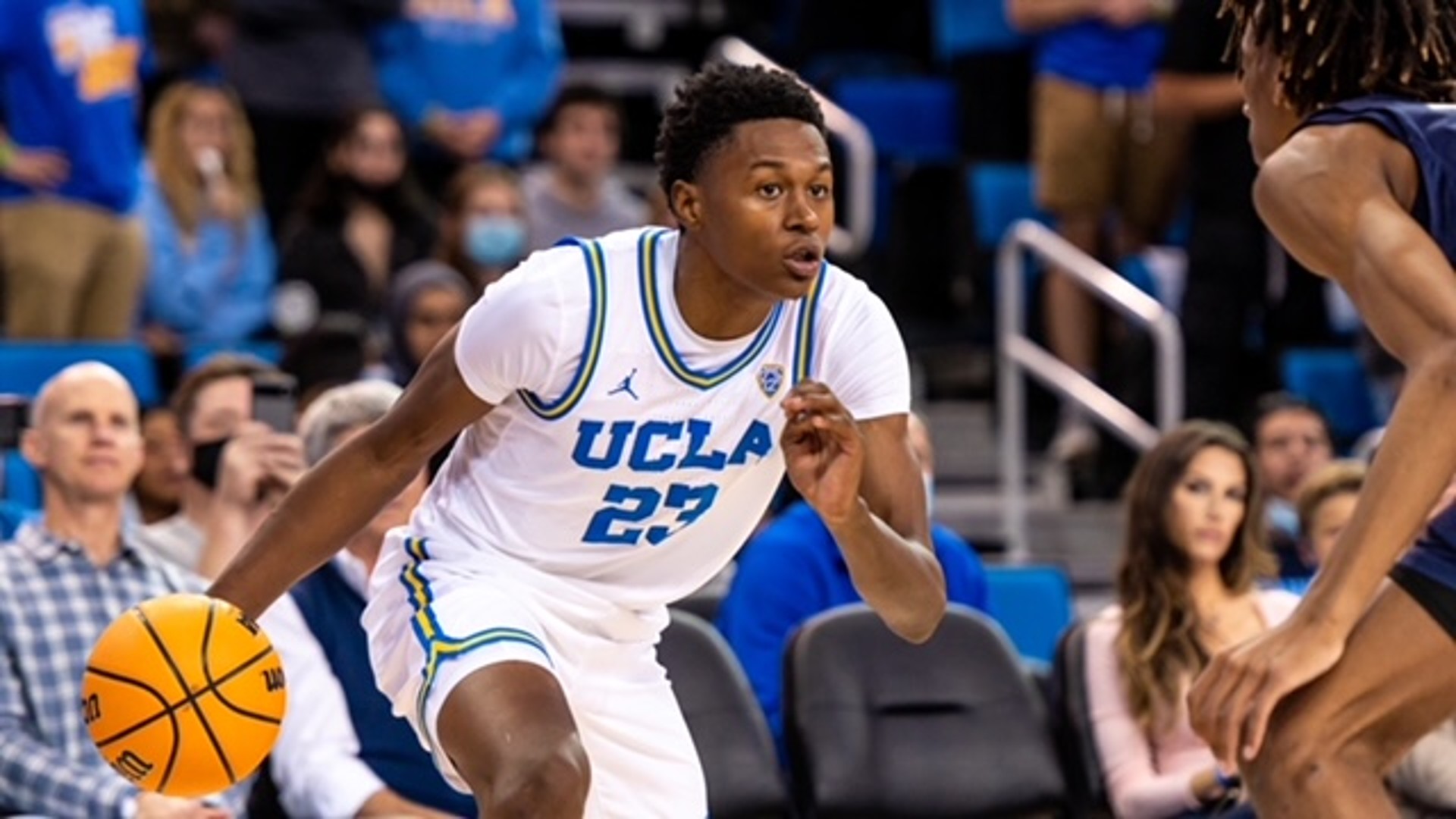 After he’d seen plenty of this, Cronin called Watson aside and showed him the preseason practice stats. They were not pretty. Cronin asked Watson if he understood there was something he could do more effectively than anyone in the gym: “Can anyone stay in front of you?”

Watson is humble enough, but he had to acknowledge his burst and ballhandling were useful in getting the ball deep into the defense. Watson still has freedom to take open shots, but defenders who close out too recklessly often will find he is headed the other way when they arrive.

“It’s been a three-month journey to get where he’s at now: how to practice hard, how to play hard,” Cronin told Sporting News. “It’s funny, when we had our first scrimmage, he was coming out one time and I was smiling at him. And he goes, ‘Don’t make fun of me coach, it’s my first game!’ Because he was breathing hard. And I’m telling him, ‘It’s going to be different. You’re not going to be your best self in our first game.’ And he gets it. He’s a highly intelligent kid.

“For us to get to March, he’s going to just be a way better player by March. We have a lot of shooters, he’s a breakdown guy; he can beat his man and break down a defense. He’s a tremendous passer when he breaks the defense down because he’s got great vision and size; he can pass over the top where others can’t, because of his size.”

As UCLA (5-0) prepares for its second major challenge of the 2021-22 season, Tuesday night in Las Vegas against No. 1 Gonzaga (5-0), Watson rests near the bottom of the stat sheet with 6.4 points per game in just 15 minutes of playing time. He nearly doubled his scoring average with a 19-point performance in the Bruins’ frustrating Monday night victory over Bellarmine and was one of the few Bruins who drew praise from Cronin. Perhaps it shouldn’t be a surprise Watson remained focused on the game while his more experienced teammates played like their minds were on the the Gonzaga game.

Although Watson is viewed as a lottery-level prospect for the 2022 NBA Draft, and Cronin acknowledges he has no expectation of him playing a second season with the Bruins, he eagerly joined a team where there was no guaranteed spot in the lineup nor an extravagance of playing time and shot opportunities promised. UCLA has all five starters returning from the team that reached the 2021 NCAA Final Four and took last year’s Zags to overtime before losing on a 40-foot buzzer shot. That’s a tough lineup to crack. Watson knew about those guys when he signed with the Bruins last autumn, though he maybe didn’t know quite what they were capable of achieving. Which is OK, because they didn’t really know it themselves, until they got there.

Now, UCLA ranked No. 2 in the Associated Press weekly poll, wing Johnny Juzang is a Sporting News preseason All-American, and forward Jaime Jaquez is on the watch list for the Julius Erving Award.

Which leads to the question: With those guys in place, where does Watson fit with the Bruins? And the answer just might be: Anywhere he wants.

“I see myself as an all-around versatile player, and any given night, they could call me to do a different thing,” Watson told SN. “I think I could impact the game in multiple ways that are going to help complement the players we already have, through my playmaking, just being able to rebound and push, defending, getting some of my teammates open for shots. I don’t think I’ll have any problem fitting in.”

In Cronin’s third season, UCLA has gotten itself into the one-and-done game with a player who is, by all accounts, currently far more focused on the “one” than the “done.” He has been respectful of his coach, teammates and, most emphatically, his circumstance. This is not uncommon among players who figure to enter the draft after a single college season, but those who are focused almost exclusively on draft position have impacted many promising programs and teams.

“Our coaching staff has instilled a very humble kind of way about the team,” Watson said. “The way they coach us, the way they teach us the game is way different than any other team that I’ve played on. They want us to play for each other, and that way, when we play for each other, everybody looks good and the team is winning and that’s a good look for the entire team.

“If I’m doing what’s best for the team, people will know that I’m unselfish, I’m a leader, and I don’t always have to have the ball in my hands in order to shine.”

Watson grew up in Long Beach and attended Polytechnic High School – best known as Long Beach Poly – which has been turning out top basketball prospects since Mack Calvin in the 60s, Johnny Nash in the 70s on through to Tyus Edney in the 90s and Jordan Bell not so long ago.

He chose UCLA in part because of its proximity to his home, but when he enters Pauley Pavilion he feels the same degree of respect for his predecessors – Kareem Abdul-Jabbar, Bill Walton, Ed O’Bannon and so many more – as he did at Poly.

“I just like to add and bring something to a school that has some culture and some meaning to it,” Watson said. “Growing up, UCLA was one of my dream schools. I would just see all these great people coming from there. And my uncle graduated from UCLA. It really meant something to me to add to that tradition and make a legacy here.

“When I committed to UCLA, I wanted to do some research of my own, and I was fortunate enough to meet some of the alumni, such as Darren Collison, Matt Barnes, Baron Davis. And that just sparked my interest for it all even more. I was telling Coach Cronin how I was watching Tyus Edney’s fullcourt buzzer-beater in March Madness. Those are just things I wanted to get knowledge on, and I wanted to see how people previous to me did it so I could have that poise and that confidence.”

Cronin fielded the same lineup for the season-opening win over CSU Bakersfield as he did against the Zags last March: Juzang, Jaquez, center Cody Riley, point guard Tyger Campbell and shooting guard Jules Bernard. The only change since has been Rutgers transfer Myles Johnson taking over for Riley, who was injured in the Bakersfield game. Cronin said last week said there is only a “minimal” chance Riley returns this week, which means Johnson likely will remain in place against Gonzaga All-American Drew Timme.

When all his players are healthy, though, Cronin has not committed to using that same group throughout, because Watson and Johnson are obviously starting-quality players. And sophomore Jaylen Clark “has really improved,” Cronin said, and David Singleton remains one of the most reliable players in the college game. He’ll never be a superstar, but he’ll do his job and smoke the defense if it leaves him open for a three.

UCLA struggled down the stretch of the Pac-12 season last season and had to win a First Four game to get into the regular 64-team NCAA Tournament bracket. So this is not a typical “bringing-everyone-back” Final Four team, if there is such a thing in college hoops any longer. There must be improvement for the preseason rankings to be fulfilled.

What Cronin is promising is the Bruins will, because of improved depth, operate at a faster speed than last season, when they ranked 341st in tempo according to KenPom.com, and that pushing the pace so aggressively should help alleviate any individual worries about playing time. The team’s top players will get as much as they can handle, more or less.

“That’ll be new for us, adjusting and constantly trying to move the ball, constant drive/kick, pace, don’t ever walk it up,” Cronin said. “It’s fun for me because it’s something I always wanted to do but I never could do.

“We’ve got to make a decision: Do we rotate starting lineups? Which, if you would do that, it would be based on matchups. Ultimately, guys want to play. Starting is one thing; playing is what really matters. I think our guys are mature enough to know … they know we have a lot of good players, so we’ve adjusted to be able to play with more pace, to make our depth a factor. And I’ve had to be on them about it. It always sounds good, but you have to practice running at that pace.”

Watson has had to catch up a little bit because his senior year at Poly was so profoundly impacted by COVID. California did not begin its high school basketball season until April and Poly continued into mid-June; Watson felt badly about leaving the team before its season ended because of commitments to events such as the Iverson Classic and USA Basketball’s squad for the FIBA U-19 World Cup, as well as early enrollment at UCLA.

He has the advantage of having played and won a gold medal in the World Cup, and of then arriving on campus at UCLA and joining the program for summer classes and workouts and a full preseason regimen in the fall. Last year’s freshmen, at UCLA and elsewhere, didn’t always get that. But his high school season lasted only seven games, about 20 fewer than customary.

Watson had a rather lackluster first three games, shooting 2-for-12 from the floor and scoring just seven points. In his last two, however, he has shot over 50 percent with 12.5 points, 6.0 rebounds, 2.5 assists and 2.0 steals.

“They had an amazing run last year as everybody saw, and they know what it takes to win. So I’ve just been taking everything I can from the older guys on our team,” Watson told SN. “The goal is to get back to exactly where we were last year and keep going and take it all the way. Nobody here has any expectations lower than that.”