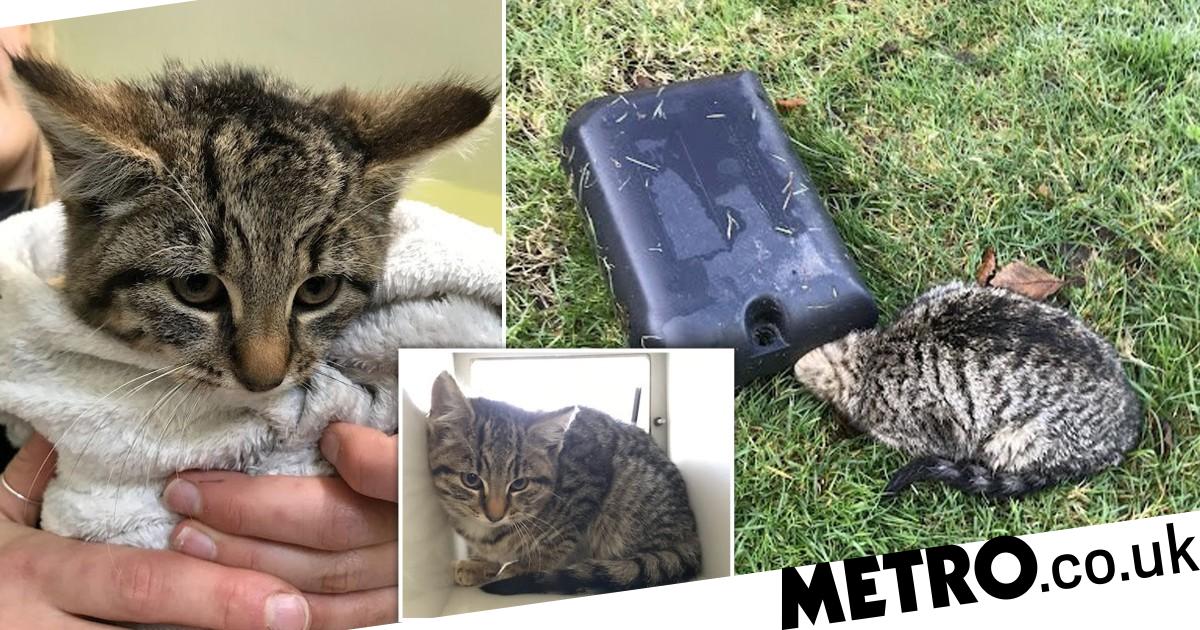 This tiny kitten had a lucky escape after getting its entire head stuck inside a rat bait box – just centimetres from deadly rodent poison.

The close call happened two weeks ago, with RSPCA workers receiving a call from a concerned member of the public after they spotted the cat.

Staff from the centre in Frinton-on-Sea, Essex, rushed to the scene to find the tabby trapped in the rat-catching device.

He miraculously survived the ordeal thanks to quick-thinking workers, who cut the box to free the curious feline.

Without time to call in reinforcements, a saw was used to split the plastic trap in a touch and go moment.

Luckily, the 14-week-old cat had not been able to reach the rat poison inside due to way he was stuck, and he made a full recovery being at a nearby vet centre.

RSPCA Inspector Jason Finch, who saved the kitten, said: ‘It was a tricky process trying to get him out of the box without causing him any more distress, but thankfully I managed to get him free.

‘I checked him over and despite his ordeal he was okay – so I then took him to the RSPCA Danaher Animal Centre for some much needed TLC and a warm bed.’

The cat – who did not show markers of having an owner – was named Mishmish, and Jason and the team are now looking for a home for him.

‘He’s the sweetest looking cat and has been named Mishmish,’ said Jason. ‘I’m so glad this was a happy ending for him.

Mishmish can live with other cats, but isn’t best suited to living with dogs or very young children. His RSPCA listing says he ‘is very affectionate and loves to snuggle up in the evenings on your lap’.

The animal welfare charity is also calling for people to use ‘humane deterrents for dealing with unwanted rats and mice’ as a result of the incident. They also urge that people take extra care ‘where poison is used to avoid trapping non-target animals’.

It was a near miss for Mishmish, but other animals may not be as lucky.

Jason added: ‘I’m just so glad he was found by the caller, who knows what would have happened to him if not.’


MORE : When will Aldi’s Kevin the Carrot go on sale for Christmas 2021?