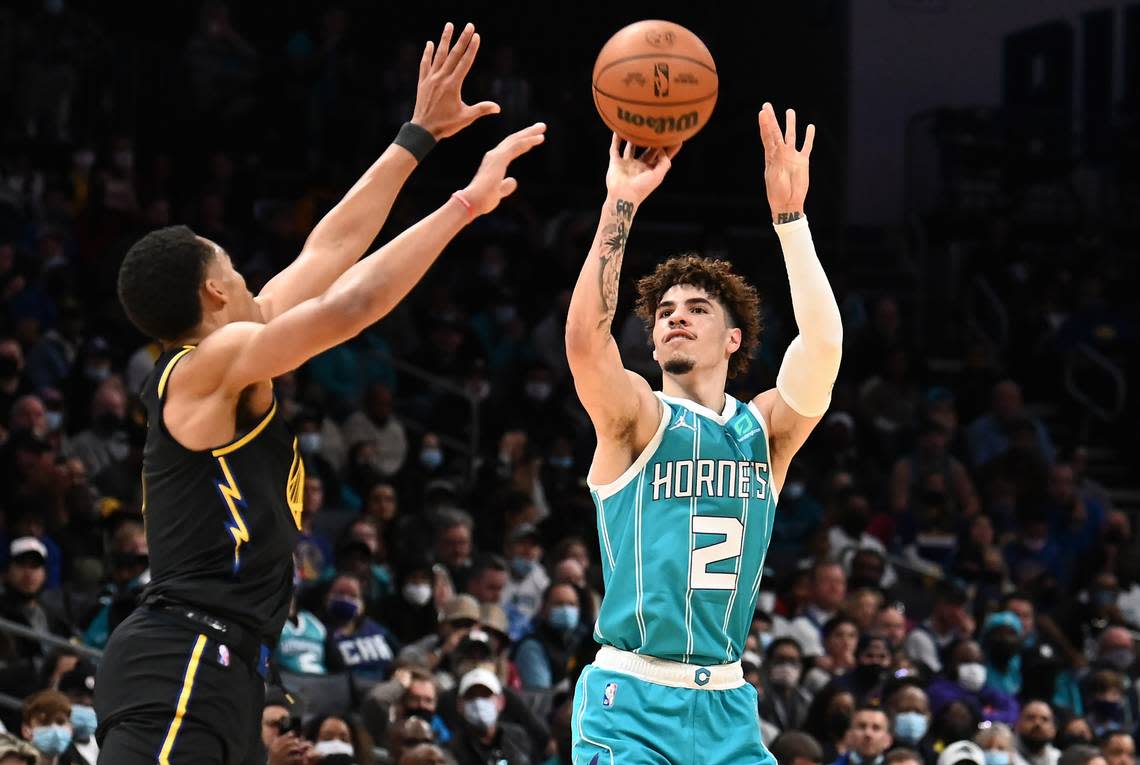 The sellout crowd was on its collective feet, bringing the juice with the city’s native son in town.

Steph Curry only gets one visit to Charlotte this season, and the atmosphere inside the Spectrum Center was super-charged right until the end. This was the Hornets’ latest opportunity to test themselves against the league’s top-tier teams, gauging precisely where they stand.

And it showed once again just how good they can be.

Terry Rozier guaranteed the team’s faithful fans were happy and fully entertained when he won a crucial jump ball and hit a pair of huge free throws in the final seconds as the Hornets held on for a scrappy 106-102 win over Golden State on Sunday night.

Here are three things we learned in the Hornets’ third straight victory.

ANOTHER SOLID GAME FOR LAMELO BALL

Following up on Friday’s impressive performance in which he became the first guard in franchise history to record multiple 15-rebound games, Ball was a catalyst in the first half for the Hornets.

He pumped in 15 points in the opening quarter alone and made sure they matched the Warriors’ intensity from the outset. Ball finished with 21 points, seven rebounds and five assists and was a good decision-maker in the waning seconds, helping ensure the Hornets had an opportunity to squeeze out one of their best wins of the season.

When these teams met in San Francisco, Kelly Oubre was looking forward to his outing against his former team, but it didn’t go so well. (No points, one rebound and one assist in a 114-92 defeat.)

Oubre was having a much better game this time around — until early in the fourth quarter. After a swooping fastbreak layup, he said something to referee David Guthrie as he turned along the baseline and began heading back on defense when got whistled for a technical foul. In the blink of an eye, Oubre was slapped with a second technical foul, resulting in an ejection.

Upset and confused by getting tossed, Oubre waved both arms to encourage the crowd to get even more boisterous and voice its displeasure at the call. Borrego was befuddled about the ejection.

“That’s a good question,” he said. “I’ll let you ask that question. I don’t have that answer.”

At least the Hornets didn’t have to worry about one of the issues that has plagued them for the better part of their first 14 games. They’ve typically fallen behind in the early going and are forced to play catch up, needing a furious run or two in order to climb back in it.

But they remained within arm’s length of the Warriors for both quarters. The largest deficit the Hornets found themselves in was five points, which definitely hasn’t been the norm. It was quite the opposite in fact, particularly in their past two games when Memphis’ Ja Morant and New York’s Kemba Walker had huge opening quarters.

“So for us we’ve got to set the tone early. I think when we do that and start games we are much better off. But I don’t think there is a lot of complacency here like, ‘Let’s get down and we can always come back.’ I don’t feel that mentality at all. But we don’t want to build those habits. We’ve got to get off to better starts for sure.”