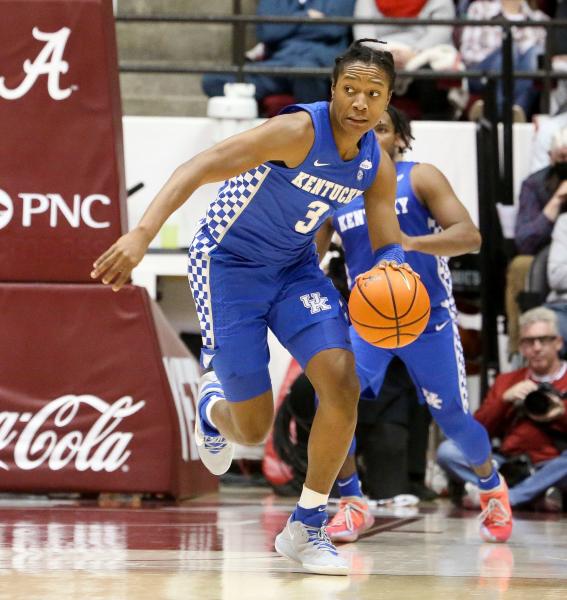 If Kentucky basketball was to win at Alabama Saturday, the Wildcats knew their 3-point defense would have to lead the way.

While Alabama has not been as successful in converting 3s as it was a year ago in an SEC championship season — the Crimson Tide entered the night shooting 31.4% from 3 — Nate Oats’ team still ranked 18th nationally in percentage of shots from 3-point range. That strategy backfired Saturday as Kentucky held Alabama to 3 for 30 from 3-point range on the way to a 66-55 win.

“We knew coming in they were going to try to be aggressive so we had to run them off the 3-point line,” freshman guard TyTy Washington said. “Making them take tough 2s, we knew we could do that and just rebound the ball, we’d be fine.”

Here is what you need to know from the win.

Kentucky basketball: How John Calipari is pushing back at critics as UK piles up wins

In two games since injuring his left ankle at Auburn, Washington was a combined 4 for 16 from the field and 0 for 6 from 3-point range entering Saturday’s game. The slump looked likely to continue when Washington missed his first three shots against Alabama, but he finally reversed the trend midway through the first half.

Washington hit 6 of 12 shots after his 0 for 3 start. He hit just 1 of 5 3s, but his one make in the second half ended a stretch of 12 straight misses from beyond the arc dating back to the Tennessee game on Jan. 15.

The news was not as good for junior point guard Sahvir Wheeler, who missed all four shots against Alabama, three days after missing all eight shots in the win over Vanderbilt. Wheeler does at least have 16 assists with six turnovers in those two games, but Kentucky needs more efficient offense from its two point guards.

Kentucky basketball: Could a Wildcat averaging less than 2 points per game be key to title hopes?

Daimion Collins has his moment

It seems like a long time since Collins entered the season projected as a lottery pick in the 2022 NBA draft. The lanky 6-foot-9, 202-pound forward played just one minute in Kentucky’s last four games before Saturday. He had scored just two points in UK’s nine games in 2022.

So when Collins checked in with 4:46 left in the first half and Tshiebwe not even in foul trouble, the move certainly qualified as a surprise. Over the course of the next two-plus minutes, Collins contributed six points and two rebounds.

Collins returned to the court in the second half to add four points and three rebounds in six minutes. He finished the game with 10 points and six rebounds.

After the game, Calipari said he woke up one night this week with the idea to use Collins to catch lobs as a counter to Alabama’s defensive strategy.

For the third consecutive Saturday, Kentucky faced a NET top-25 team in front of a capacity crowd on the road. The Wildcats went 2-1 in that stretch with the only loss coming after Washington was sidelined by an ankle injury at No. 1 Auburn.

After dropping its first two road games this season, Kentucky has won four of its last five road games.

“…It’s us against everybody else. Our guys are taking that challenge and doing a good job with that.”