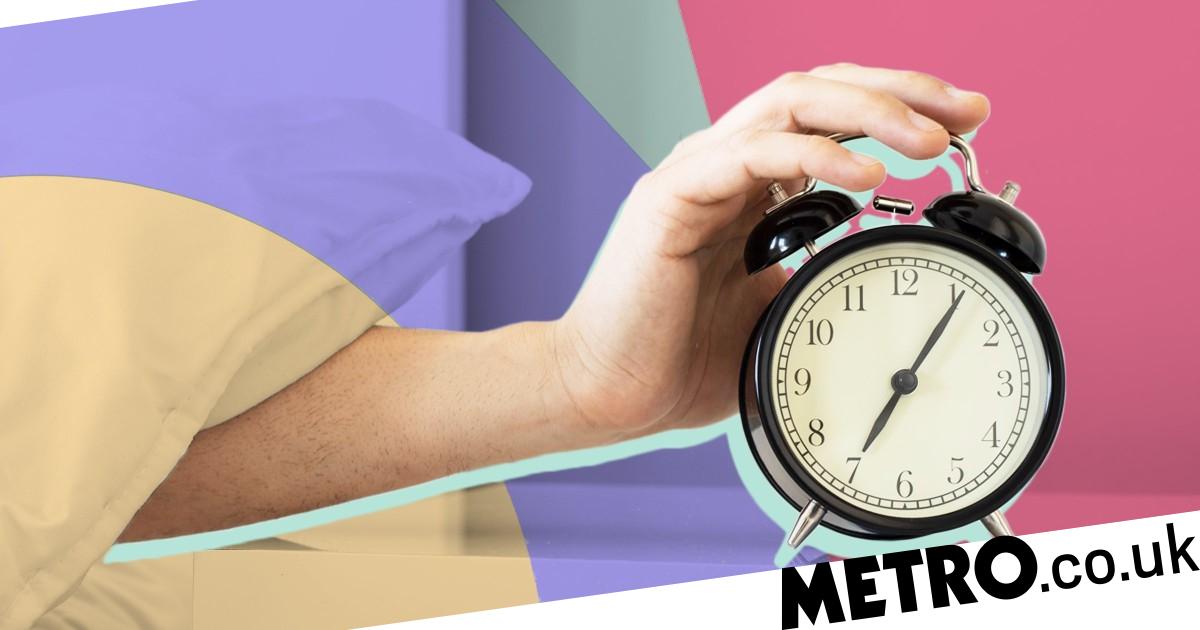 Got an unhealthy relationship with your snooze button? Maybe it’s high time you two broke up.

Waking up every morning by hitting snooze every five minutes until the last possible second is not a functional way to be.

Stuck between sleeping and being awake, but somehow getting the benefit of neither – that’s no way to start your day.

As therapist Claire Elmes tells Metro.co.uk: ‘The problem with snoozing is that the sleep quality isn’t good and therefore doesn’t give us the right kind of sleep.’

If you’re trying to give your morning routine a boost, we’ve got some habit hacks from her to help you and your snooze button break up for good.

Firstly, Claire recommends taking a look at your sleep routine with the help of a diary, in which you can track things like what time you wake up, what time you got to sleep, how much time you spend asleep, etc.

‘Most of us need between six and 10 hours sleep,’ she explains, adding, ‘Work out how much sleep you may need/want and then work backwards, ensuring your bedtime allows you to wake up at your desired time.’

You can also write down things like what you ate before bed and when you stopped looking at screens to get a better idea of which habits work for your sleep and which don’t.

‘Make sure you have to get out of bed to turn the alarm off,’ she says.

‘Sounds simple, but usually, when we are up out of bed it is easier to continue with our morning routine.’

Claire’s third and best tip is something called habit stacking, which she says is great for getting into new routines.

‘Consider what you would like the first thing to be when you get up,’ she tells us. ‘Some people go to the toilet, some get dressed, some get coffee/tea. Find your go-to “next step habit” and then go straight into it.’

When it comes to making habit stacking work, Daniela Mercado Beivide, a PhD researcher for Holly Health, an app that focuses just that, told us: ‘Pick an activity that you already do automatically without thinking about (this is called hinging event in behavioural science) and then “piggyback” an extra action you want to start incorporating into your routine.’

‘Start with small actions that feel easy enough for you to do on a daily basis, and work up from there,’ she added.

Daniela also advised picking things to do that feel good – for example, instead of reaching for your snooze button when you hear your alarm, maybe getting into the habit of going straight to your favourite breakfast food would entice you out of bed.

‘Ultimately the only person in charge of your decision whether to go back to bed is you and that can be difficult,’ concludes Claire.

‘Stay accountable and know when to reach out for professional help.’


MORE : Sleep resolutions everyone should make in 2022


MORE : These are the Christmas habits that really annoy your neighbours


MORE : How to get enough sleep during party season