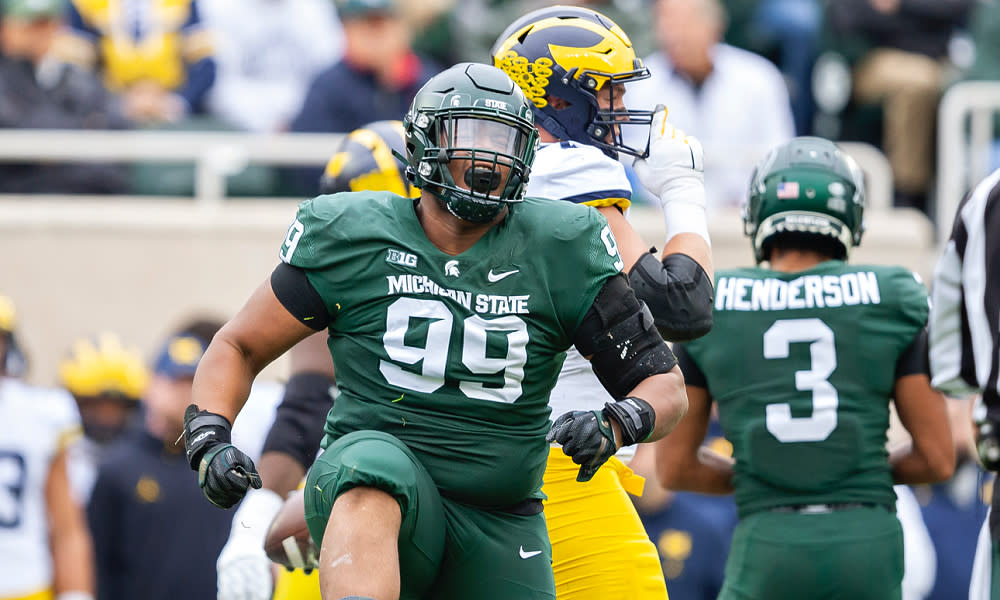 Sorry if this take sucks, it’s not my fault …

Like the College Football Playoff, this has yet to expand to include everyone.

I’ve been through the experience. The ranking process in Grapevine is whatever, but the spread of fine meats and cheeses is top drawer …

I think … Michigan State beat Michigan a few weeks ago. Wait a minute …

I know … Michigan State beat Michigan a few weeks ago.

I believe … it can’t still be the one major head-to-head inconsistency in the top 25 over the last two weeks, because if you do that …

I think … the Oregon loss to Stanford is among the worst by any team in the top 25.

I know … Ohio State has crushed it since the loss to the Ducks.

I believe … Oregon should be ranked ahead of Ohio State, but considering the Michigan-Michigan State thing, a mediocre performance against Washington State would’ve dropped Oregon behind Ohio State.

I think … if the one loss by Michigan State was so egregious that it pushed it behind Michigan, and …

I know … the committee blew off losses to Notre Dame, Minnesota, and Wisconsin in last week’s rankings, then …

I believe … losing at Ohio State – even 59-31 – shouldn’t have been enough to knock Purdue out of the top 25 with wins over now-17 Iowa and now-7 Michigan State.

I think … it doesn’t matter because …

I know … Oregon and Michigan State control their respective destinies.

I think … Cincinnati will be in the top four at some point.

I know … the committee cares about 12-1 or unbeaten Power Five conference champions over anything else.

I believe … the committee will do a 2014 TCU and yoink Cincinnati out of the top four if there are four viable Power Five teams.

I think … someone in that room in Grapevine argued the merits of ranking Notre Dame higher than 8.

I know … Notre Dame’s only loss was to Cincinnati.

I believe … if you really believe Cincinnati is the fifth-best team in the country based on just one win that overcomes a slew of mega-meh performances against awful teams, then the team that lost that game should be ranked one spot at the 6 behind UC.

I think … Oklahoma State is the underground indie band team the mainstream is just starting to get into.

I know … it’s going to beat Oklahoma in the regular season finale.

I believe … Oklahoma State will probably play Baylor in the Big 12 Championship, not Oklahoma.

I think … Oklahoma State will be 12-1 with its lone loss coming in a tasteful fight at Iowa State.

I know … the committee loves its 12-1 Power Five conference champions.

I think … Oklahoma isn’t out of this yet.

I know … it has lost regular season games before and gone on to win Big 12 Championships and make College Football Playoff appearances.

I believe … Oklahoma finds its way in if it wins out over Iowa State and Oklahoma State twice to finish as the 12-1 Big 12 Champion.

I think … Oregon loses at Utah this weekend.

I know … Ohio State is more beatable than it seems.

I believe … Notre Dame is lurking in this more than people think.

I believe … it’s going end up 5 in the final rankings.

I know … you do NOT want to be the 4 and deal with Georgia, however …

I think … Houston, San Diego State, and UTSA are more in the mix for a New Year’s Six bowl game than it might seem.

I know … it’s going to end up being Houston vs Cincinnati in the American Athletic Conference Championship.

I believe … the winner will get the New Year’s Six cookie the committee throws the top Group of Five champion.

I think … no one on the committee has seen San Diego State play, because …

I know … San Diego State plays until the wee hours of the AM for most of the country.

I believe … really, there’s no way, no how, no chance any of the committee members watched the games against San Jose State, Hawaii, or Fresno State. With that said …

I think … UTSA and Houston can’t make this argument.

I know … San Diego State beat Utah, Air Force, Arizona – it has a conference win and Indiana doesn’t – and Nevada, with every game essentially on the road with the team playing its “home” games this season in Carson, California.

I believe … if San Diego State wins the Mountain West championship – and if Utah wins the Pac-12 title – even with the loss to Fresno State, resumé-wise a case could be made that it’s the most deserving Group of Five team even if Cincinnati goes 13-0.

I think … Georgia will beat Alabama in the SEC Championship in an epic-close game.

I know … there will be two other viable Power Five options that have to get in.

I believe … it would be a glorious come-to-Bill-Hancock moment for the future of the College Football Playoff if the raging national debate – and in the committee room – is over 11-2 Alabama vs 13-0 Cincinnati for that fourth spot.

I know … the Because It’s Alabama clause sits in a box in the corner of the CFP committee meeting room.

I believe … it’s going to end up being Georgia, Ohio State, Oklahoma State, and Cincinnati, in that order.

I know … I believe it’s all going to be okay.

I believe … I think it’s all going to be okay.