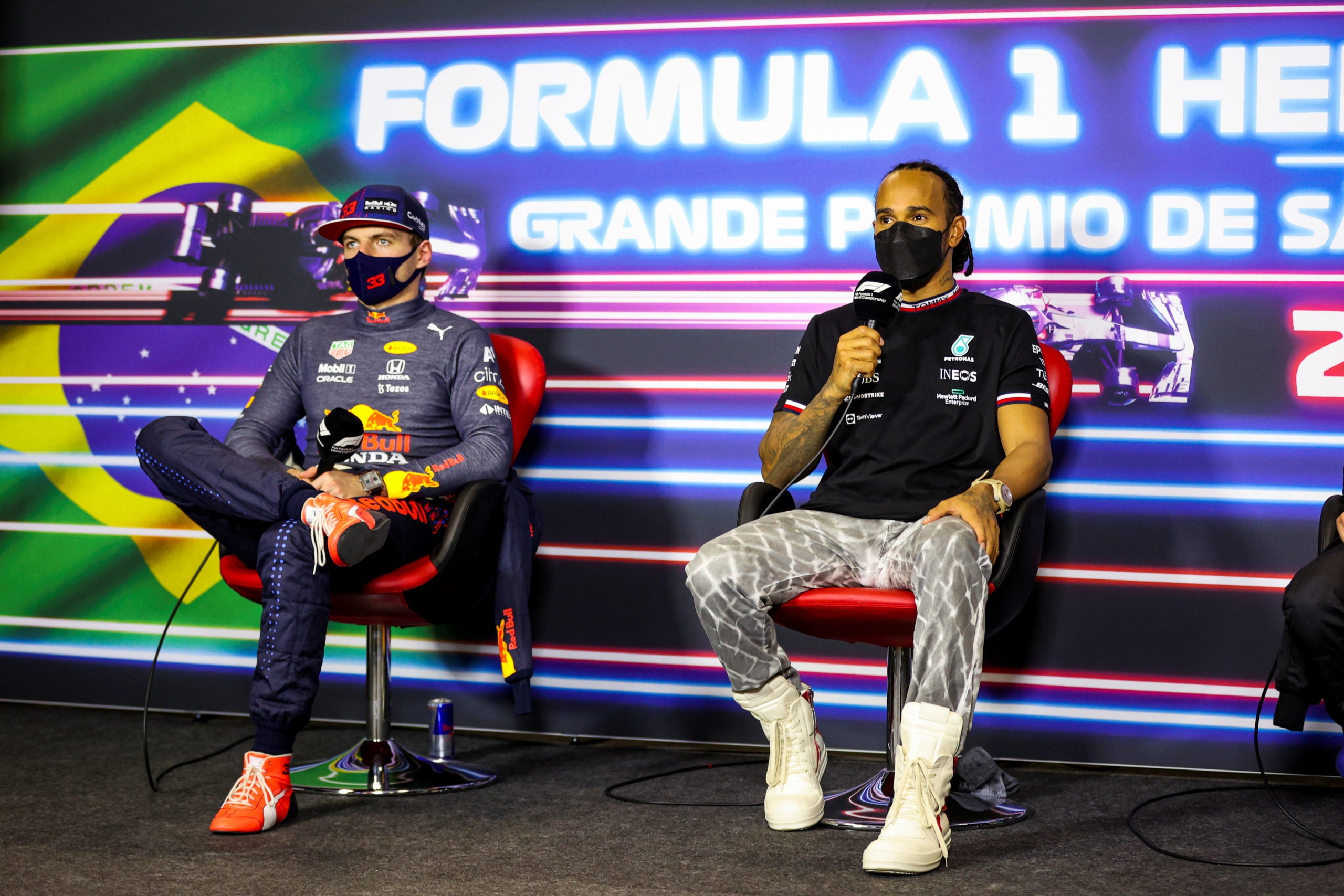 Red Bull’s Max Verstappen and Mercedes’ Lewis Hamilton during the press conference. FIA/Handout via REUTERS ATTENTION EDITORS – THIS IMAGE HAS BEEN SUPPLIED BY A THIRD PARTY. NO RESALES. NO ARCHIVES

Lewis Hamilton and Max Verstappen shook hands after the Sao Paulo Grand Prix but the gloves are now well and truly off between Formula One rivals Mercedes and Red Bull as the championship enters the final straight.

As Hamilton celebrated his 101st win, and possibly the greatest race of his F1 career to revive his hopes of a record eighth world title, Mercedes team boss Toto Wolff vented his feelings.

The Austrian spoke of Hamilton’s ‘harsh’ disqualification from Friday’s qualifying and the stewards ‘laughable’ decision not to penalize Verstappen when the Dutch driver “forced” the champion off the road on Sunday as he tried to overtake.

His sense of injustice was palpable, as well as the feeling that Mercedes were fighting forces greater than Red Bull even as Hamilton closed the gap to Verstappen to 14 points with three races remaining.

“The team has always been together but these decisions have brought us so close together,” said Wolff.

“It’s against us and I think this is what Lewis felt all his life and we now feel it together as a team and we’re going to fight. And we are not going to be the victims. That is the emotion we’re feeling in the garage at the moment.”

On the Red Bull side, there was also a pervading sense of suspicion.

Verstappen was fined 50,000 euros ($57,000) on Saturday for literally taking his gloves off to feel with his hands the rear wing element of Hamilton’s car after qualifying — a clear breach of the sporting code.

The gesture reflected the questions being asked at his team about why the Mercedes was so fast and what was going on with its wing.

Wolff’s tone was steely on Saturday, after Hamilton went from last to fifth in a sprint race setting the grid for Sunday.

He was particularly vexed by Hamilton’s car failing a rear wing inspection, when Red Bull had been allowed to tape theirs’ up without penalty previously.

The demotion from first to last cost him any chance of the three points available to the Saturday sprint winner, points that could be crucial at the end of the season.

Wolff spoke of a previous “commonsense buffer,” a ‘modus operandi’ that he said had been dismantled in a break with the past.

“If the modus operandi is different now, you maybe need to look at others also with a more strict and severe eye,” he declared.

“I can tell you that in the next few races we are going to look at every single race tape that’s going to fall off a car and ask questions.

“If such a thing as a gentlemans’ agreement exists in Formula One, because there ain’t no gentlemen, then now it doesn’t any more. You have no millimeter of leniency of fixing things on a car.”

Red Bull boss Christian Horner said the straight line speed of the Mercedes was eye-popping and something his team wanted to understand.

“It’s up to the FIA to police the sport and to govern it,” he said when asked about a possible protest in future. “We trust in them and their tests and their investigation.”

Asked by Sky television if Verstappen had felt anything when he got his hands on the rear wing element of Hamilton’s car, Horner gave nothing away other than a quip.