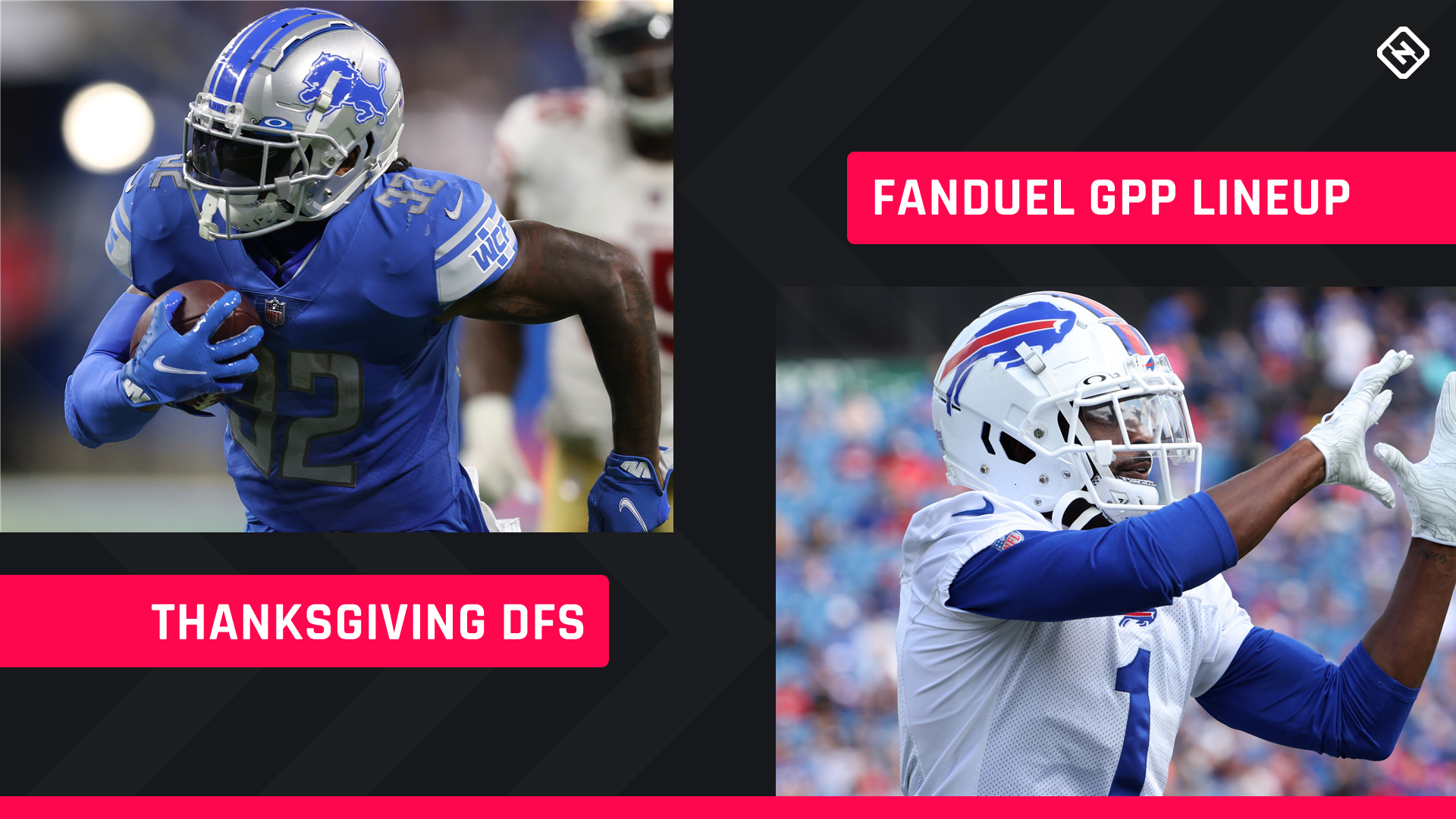 Football is synonymous with Thanksgiving, and now is as good of a time as any to start new football-related Thanksgiving tradition: Winning some money in daily fantasy football tournaments. This year’s Thursday DFS slate features players from the Bears, Lions, Raiders, Cowboys, Bills, and Saints, but thanks to injuries and illness, several big names might be out of action (Amari Cooper, CeeDee Lamb, Alvin Kamara, Allen Robinson). That just creates more potential value sleepers, and we’re happy to take advantage with our FanDuel lineup picks.

Before we get into the lineup, here are the basic rules for FanDuel contests. Scoring is pretty standard, with the only notable settings being four-point passing TDs and half-point PPR.

MORE DFS: How to win a FanDuel single-game contest

Prescott is fresh off a season-worst 4.64 FanDuel points, and he’ll be without Amari Cooper (COVID) and likely CeeDee Lamb (concussion). We still like him to bounce back against the reeling Raiders defense and treat his home fans to a Thanksgiving performance worthy of a post-game turkey leg.

Don’t let the Lions’ putrid record overshadow the fact that Swift is balling this season. He’s rushed for at least 130 yards in two straight contests and reached at least 15.0 FanDuel points in five of his past six games. The Bears are a stingy run defense, but Swift should still be able to accumulate the FD points we’re seeking.

Mooney has taken advantage of Allen Robinson’s absences — both literal and figurative. Mooney has scored three times over the past three games, including a rushing touchdown, and will be in a good spot to deliver another big game as the Bears’ top perimeter option.

Thursday is a prime opportunity for Gallup to make himself — and DFS players — some money. With Cooper and Lamb likely to miss Thursday’s contest, Gallup will have the opportunity to serve as the Cowboys’ No. 1 option in the passing game. He’s gone over 100 yards with a touchdown three times in his career, and a fourth could be in the cards in this spot.

Sanders has cooled off considerably since a hot start, but we’re hoping for lightning in a bottle. The Saints’ No. 1 cornerback, Marshon Lattimore, can be inconsistent, but he’s also capable of smothering top receivers. If Stefon Diggs finds himself bottled up for stretches of Thursday night, Sanders has proven himself capable of picking up the slack. We’re accepting the risk-reward profile instead of opting for a higher floor, such as the one that comes with Hunter Renfrow. We’re also hoping Sanders’ recent cold streak will lead to lower ownership.

Schultz remains a fixture in the Cowboys passing game. His eight targets against the Chiefs were second on the team, and he’s in for another hefty workload this week. He’s scored double-digit FanDuel points three times this season, and it’s reasonable to bank on a fourth.

Ingram’s selection has nothing to do with what Jonathan Taylor just did to this Bills defense last week. If anything, they’ll be extra amped to shut down the run. What we do like about Ingram is the heavy workloads — both on the ground and through the air — he’s handled in Alvin Kamara’s stead. His carries and targets have increased in each of the past two weeks, and he should be heavily involved once again.

It’s easy to look at the Cowboys’ offensive struggles last week and dismiss the solid defensive performance they delivered. Meanwhile, the Raiders are struggling in every facet, and it wouldn’t be a surprise to see them unravel further on a short week.