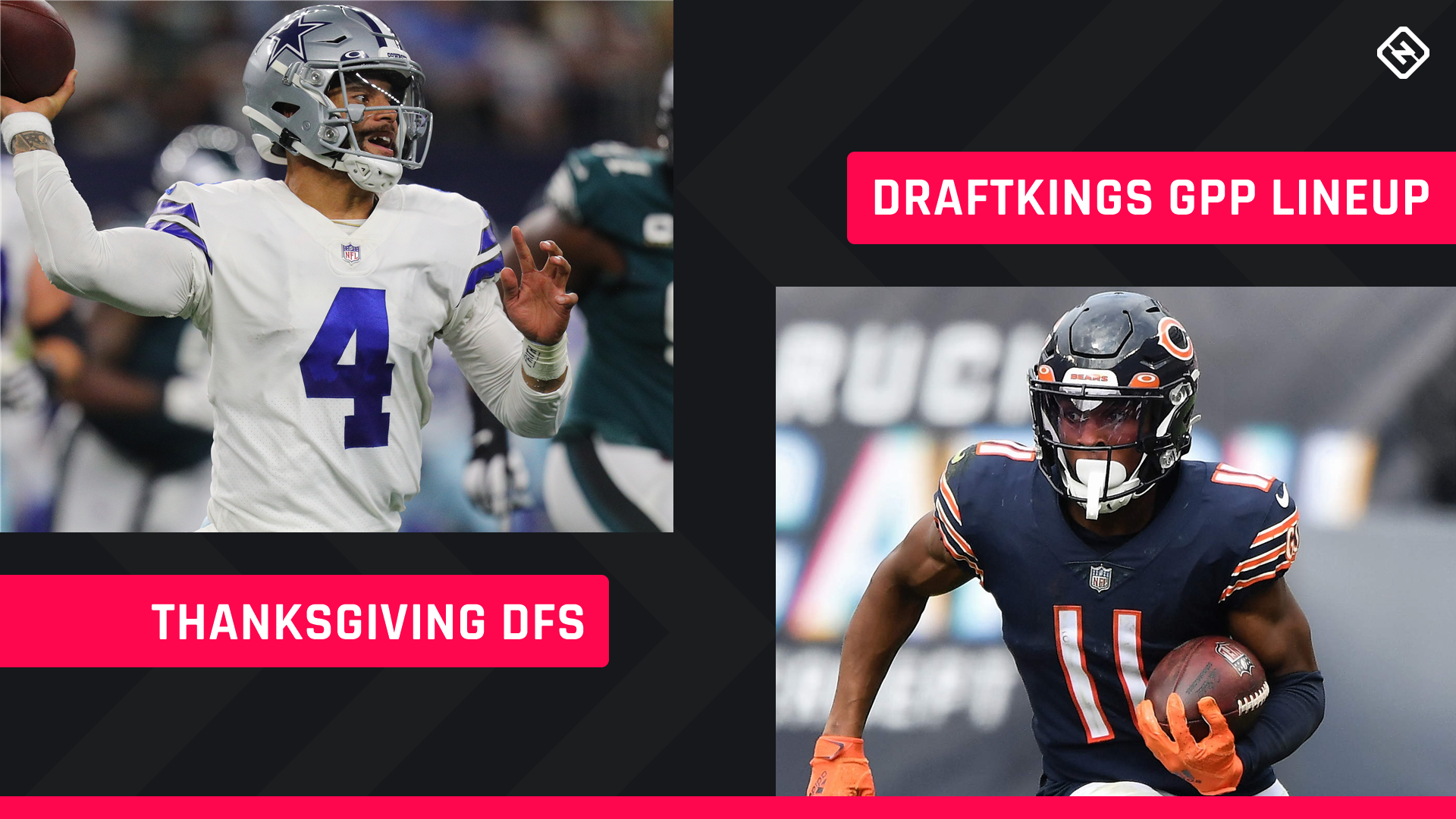 Thanksgiving means football…and football means fantasy football. Where there’s fantasy football, there’s DFS, and where there’s DFS, there’s money. We’re here to help you serve a nice side of daily fantasy winnings to go along with food and family on Thursday. The three-game slate features the Bears, Lions, Raiders, Cowboys, Bills, and Saints and provides a varying level of high-priced studs and mid-tier values. Like a good Thanksgiving meal, our DraftKings tournament lineup samples a little bit of everything.

Before we break down our picks, here are the most notable scoring rules for DraftKings contests: Full-point PPR, four-point passing TDs, three-point bonuses for 100 rushing yards, 100 receiving yards, and 300 passing yards.

MORE DFS: How to win a DraftKings Showdown contest

Prescott may be coming off of his worst game of the season and likely without Amari Cooper (COVID) and CeeDee Lamb (concussion), but this is a spot — at home on Thanksgiving — where Dak and the Cowboys can get back on the winning track.

In case you didn’t notice because the Lions’ winless record distracted you, Swift’s breakout is well underway. He’s hit 130 rushing yards in back-to-back games and has scored at least 17.7 DraftKings points in five of his past six. The Bears are no walk in the park for running backs, but we’re going to bet on Swift’s talent and current form.

We’re still waiting for Montgomery’s volume to see a bump, but he’s seeing the lion’s share of the backfield work. The Bears are three-point road favorites, so the matchup suggests Montgomery will be involved throughout the entire afternoon.

Mooney is quietly experiencing his own breakout season — he has three touchdowns over his past two games — and will continue to serve as the Bears’ No. 1 pass-catcher with Allen Robinson (hamstring) compromised, if not out altogether.

We’re not asking for a monster performance from Renfrow, but if he and Derek Carr fall into a rhythm, another seven catches is a reasonable expectation considering he’s hit that mark in three of his past four.

It’s “next man up” for the Cowboys’ receiving corps. With Cooper and Lamb likely to miss Thursday’s contest, Wilson will be responsible for a heavier workload. While 100 yards and multiple touchdowns isn’t necessarily likely, they’re benchmarks he has hit in his brief career.

Schultz finished second on the Cowboys in targets (8) against the Chiefs, and he figures to be heavily involved in another game with a depleted collection of pass catchers. He’s caught at least five passes in six contests and reached double-digit DK points in each.

Waller continued to claw his way out of an extended slump with 116 yards on seven grabs (eight targets) last week. He’s the most dynamic player on the Raiders, so we don’t have to search for reasons to include him here.

The Bills are still among the best defenses in the league in spite of being thumped by the Colts last week. Alvin Kamara (knee) will be less than 100 percent if he plays, so the Bills won’t have a Jonathan Taylor-esque talent with which to contend. Buffalo’s D/ST totaled 32 points in the three games preceding its most recent dud.