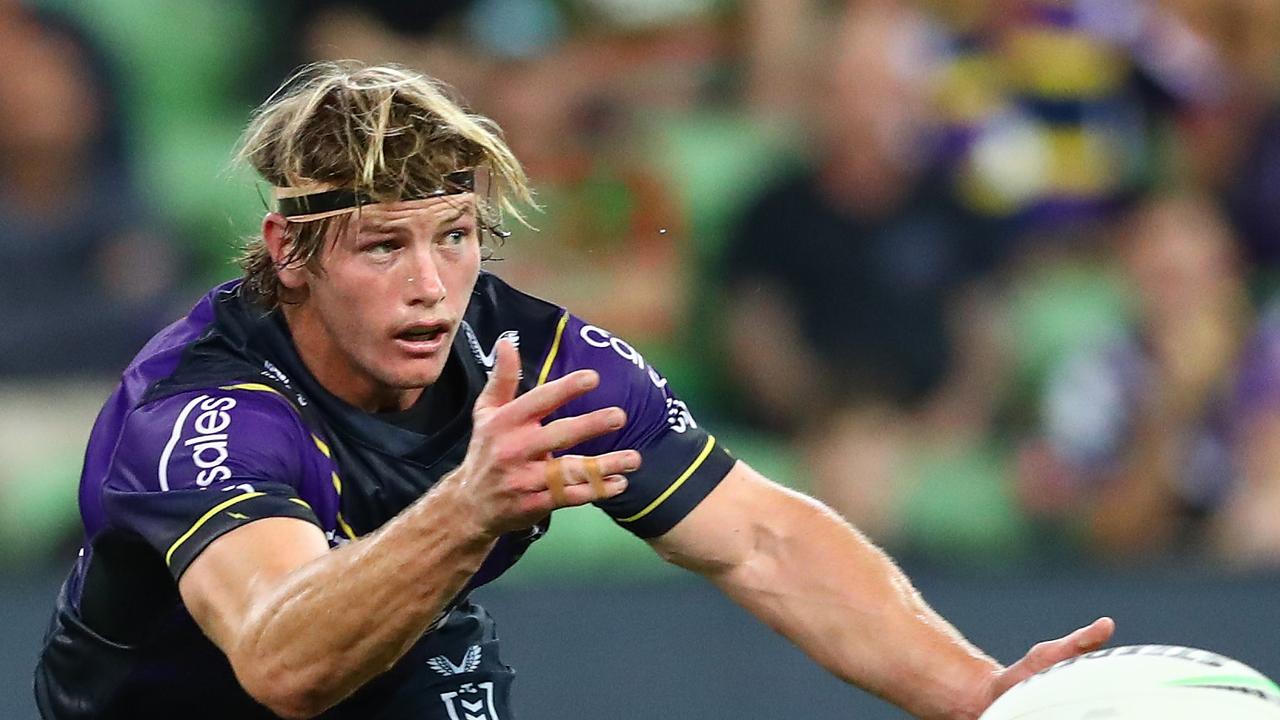 Nathan Cleary could make an early return from injury, while a Melbourne Storm star player has been ruled out with Covid. See all the Round 3 team news.

Melbourne hooker Harry Grant has been ruled out of Saturday night’s game against Parramatta at AAMI Park after testing positive to COVID-19.

Grant failed a rapid antigen test before entering Storm headquarters on Tuesday morning before being sent for a PCR test and placed in isolation.

He returned a positive result after the deadline passed for the lodgement of this week’s team with the NRL. As a result, Grant will be forced to isolate for the next seven days.

His replacement in the squad of 24 will be named later in the week but Tyran Wishart was named on the interchange bench and seems the logical starter against the Eels, although Brandon Smith was also named as part of the extended squad.

Stream every game of every round of the 2022 NRL Telstra Premiership Season Live & Ad-Break Free In Play on Kayo. New to Kayo? Try 14-Days Free Now >

Storm head of football Frank Ponissi insisted Smith was a chance to play provided he proved his fitness during the week.

“We’re not going to rush him because of that,” Ponissi said.

“We will see how Brandon progresses during the week with his hand. The surgeon has said there is no risk in playing him. If he gets through the next two sessions without any discomfort, he is a chance of playing.”

Ponissi said the club had prepared their players during the preseason for the potential disruption caused by Covid.

“We spoke about this at great length during the preseason with our players,” Ponissi said.

“We just have to move on. We trained today without him knowing there was a chance he could get a positive covid test.”

Meanwhile, Nathan Cleary could be set to play his first NRL action of 2022 in Round 3, after being named on an extended bench for Penrith.

Panthers initially ruled Cleary out from the first three matches of the season as he recovered from off-season shoulder surgery, but his inclusion means we could see him play a week early.

Team Talk: Andrew McCullough (elbow) is OUT with Moses Mbye shifting from the interchange to hooker. George Burgess escaped with a fine following his dangerous contact charge and has been named in the reserves.

Team Talk: Teig Wilton copped a one match ban for his dangerous contact on Mitchell Moses, Siosifa Talakai starts in his place. Ronaldo Mulitalo failed a HIA test against the Eels and has not been named with Matt Ikuvalu replacing him on the wing. Braydon Trindall returns from suspension and is named at number 16 which sees Royce Hunt relegated off the bench.

Team Talk: Jackson Hastings has been named after opting to front the judiciary over his dangerous tackle. Luke Garner comes into the starting side in place of Kelma Tuilagi (HIA, 5-day turnaround). Jacob Liddle returns from injury and is named to start at hooker pushing Jake Simpkin to the interchange and Alex Seyfarth to the reserves.

Team Talk: One change to the team from last week with Kodi Nikorima coming into the halves for an injured Ash Taylor. Addin Fonua-Blake suffered a late hand injury in the loss to the Titans, but has been named.

Team Talk: Cameron Murray returns to the starting side after starting from the bench last week. Liam Knight returns from injury and is named on the interchange bench.

Team Talk: Big news is the benching of Origin star Angus Crichton in favour of last week’s two try star Nat Butcher. Sitili Tupouniua has overcome concussion protocol to take his part in the game. Joey Manu and Connor Watson have been named despite copping knocks last week against Manly.

Team Talk: One big out for the premiers with Brian To’o (knee) replaced by Talan May.

Somewhat surprisingly both James Fisher-Harris (shoulder) and Scott Sorensen (wrist) have been named. Only other slight point of interest is NATHAN CLEARY IS BACK. The star half has been named in jersey 24 and so must be some chance to play.

Lachlan Fitzgibbon (knee) is out replaced by Mitchell Barnett with Mat Croker coming on to the bench. David Klemmer is still not ready to return.

Team Talk: There will be just one change to the side that defeated the Rabbitohs in Round 2, with Harry Grant set to miss out (despite being named) after testing positive to Covid. Tyran Wishart will likely move into the starting side, however Brandon Smith has been named among the reserves and is an outside chance of returning.

Team Talk: Nathan Brown starts at lock following a successful return from injury last week, with Oregon Kaufusi dropping to the bench. Wiremu Greig comes onto the interchange in place of Jake Arthur.

Team Talk: Brad Schneider (Covid) returns in place of Matt Frawley in the halves, with Frawley dropping to the bench. Jordan Rapana (suspension) and Nick Cotric (quad) are big inclusions in the backline. James Schiller and Seb Kris drop out. Josh Hodgson (ACL) is out for the season, gifting Tom Starling the starting hooking role.

Team Talk: Unchanged 1-17. New signing Jamayne Isaako has been listed among the reserves following a hasty switch from the Broncos.

Team Talk: No changes at the Broncos following an unbeaten start to the season.

Team Talk: Mitchell Dunn (ACL) is out for the season, replaced by Reuben Cotter on the bench. No other changes to the 17 after Tom Gilbert escaped with a fine for his crusher tackle on Semi Valemei. Jamayne Taunoa-Brown (leg) has been included in reserves as he aims for a comeback.

Team Talk: Same 17. Dylan Walker suffered a head knock in the loss to the Roosters, but with an extended nine-day turnaround he has been named.

Team Talk: Same 17 as last week with Tevita Pangai Jnr free to play despite being placed on report.