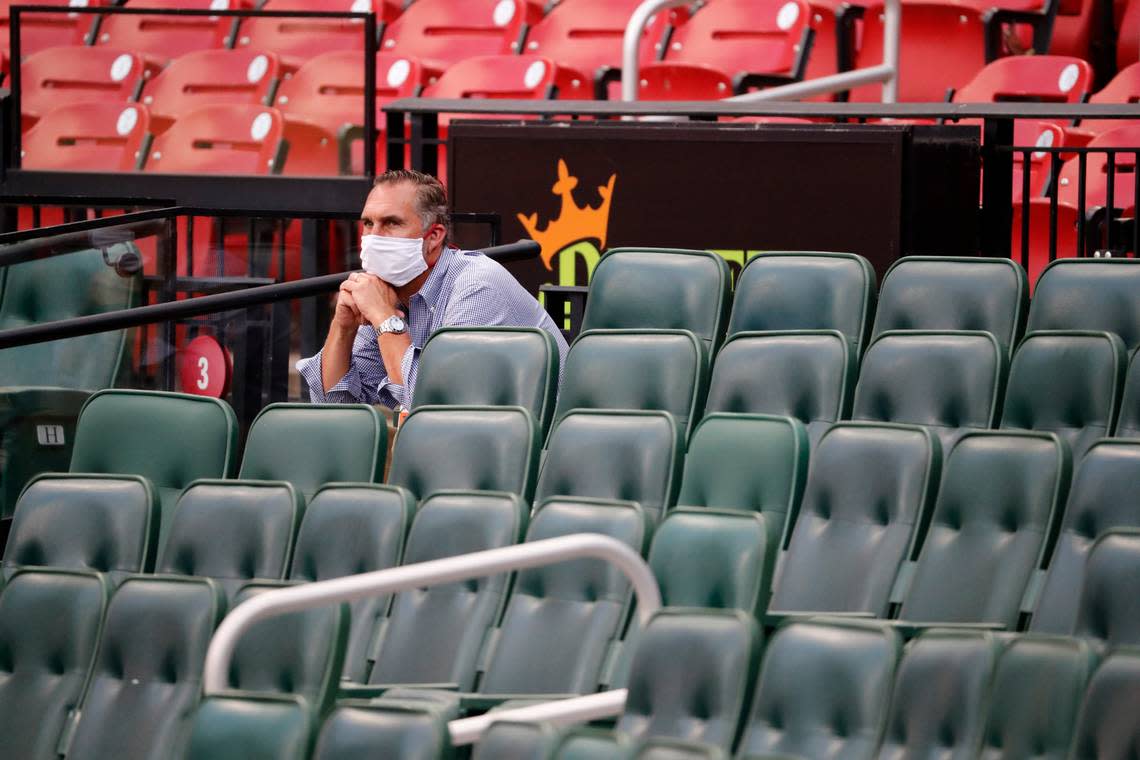 With significant room on their 40-man roster and plenty of time to make decisions regarding the potential of some of their more advanced prospects, the St. Louis Cardinals met Major League Baseball’s deadline for protecting players from the Rule 5 draft Friday by selecting the contracts of right-handed relievers Freddy Pacheco and Jake Walsh and utility infielder Brendan Donovan.

That deadline represents the last on the calendar for the league and its teams before the likely onset of a lockout at the expiration of the collective bargaining agreement Dec. 1.

Each of Donovan, Pacheco and Walsh played in the Arizona Fall League for the Glendale Desert Dogs and Donovan was selected to the league’s All-Star game. He also joined the Cardinals in Los Angeles as part of the taxi squad in advance of the NL Wild Card game, which they lost to the Dodgers.

Donovan, 24, was one of the organization’s most quickly moving prospects in 2021. He appeared at three levels and combined for a .304 batting average and 12 home runs for Peoria, Springfield and Memphis while appearing at all four infield spots as well as left and right field. He was a seventh round draft pick from the University of South Alabama in 2018.

Pacheco, 23, signed as a minor league free agent from Venezuela in 2018. He also appeared at three levels last season and allowed only four earned runs in 22 2/3 innings combined at Springfield and Memphis.

Walsh, 26, was a 16th round selection from Florida Southern College in 2017. He had reconstructive surgery on his right elbow in 2019 and did not pitch in 2020 due to the pandemic. He appeared in only 17 games for Springfield and Memphis and struck out 34 hitters in 22 innings.

In the Rule 5 draft, players with certain amounts of minor league experience — based on both their age and their method of acquisition — can be selected by other teams for their Major League roster so long as they remain on the selecting team’s active roster or the injured list for the duration of the next season. If the acquiring team wishes to send the player to the minor leagues, they must first offer them back to the team from which they were drafted.

Traditionally, the Rule 5 draft is the last event of the MLB Winter Meetings, and is scheduled this year for December 9. In the event of a work stoppage, all transactions are expected to be frozen, and it’s likely the Rule 5 draft would follow suit.

Notable Rule 5 selections of the Cardinals include reliever Matt Bowman, who appeared in 156 games from 2016-2018, and infielder Hector Luna, who was a contributor in a utility role in 2004 and 2005.

Among those not protected by St. Louis and eligible to be selected by other clubs is shortstop Delvin Pérez, the team’s first round draft pick in 2016 who was also eligible and not selected last winter. Outfielder Nick Plummer, who was the club’s first round pick in 2015, opted for minor league free agency earlier this offseason after being informed that he also would not be added to the roster.

Infielder Kramer Robertson, who joined the club in Los Angeles alongside Donovan, was also left exposed. So too was slugging first baseman Luken Baker and pitchers Tommy Parsons and Austin Warner, who impressed in spring training and early in the season but ultimately remained at Memphis for the duration of the season.

The Cardinals have also sought to fortify their depth in recent days by signing to minor league contracts players who might make cameo contributions in 2022.

Infielder Anderson Tejeda has made appearances at second base, third base, and shortstop for the Texas Rangers in the last three seasons and has 40 strikeouts in 94 career plate appearances.

Right-hander James Naile announced his own signing via Twitter. Growing up a Cardinals fan in Charleston, Missouri, Naile transitioned to the bullpen full-time last season, his sixth in the system with the Oakland A’s.

The most notable of the bunch is lefty Kyle Ryan, who has made 190 big league appearances over seven seasons with the Detroit Tigers and Chicago Cubs. Ryan was extremely effective in 2016 with Detroit and 2019 with the Cubs, and like Naile, induced ground balls from contact at a much-higher-than-average rate. Indeed, Ryan profiles similarly to T.J. McFarland, who turned a minor league deal in 2021 into guaranteed Major League money for 2022.