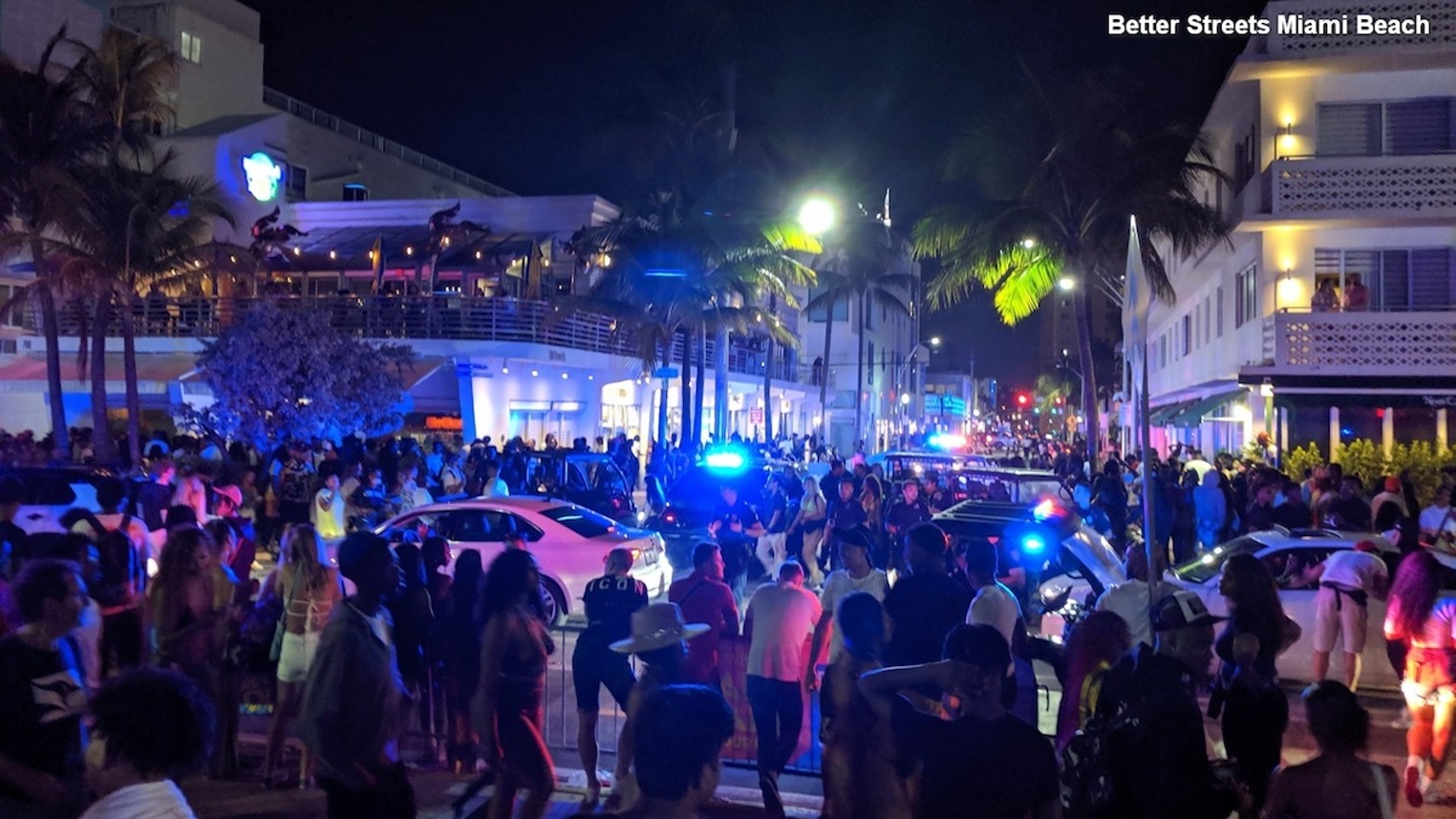 Spring break on Ocean Drive was lit: Local10 reporter Ian Margol was photobombed by a pair of twerking rumps and the historic beachfront thoroughfare experienced its largest crowds so far this year.

But after three people were hospitalized following a shooting on Ocean Drive, Miami Beach police officers on a golf cart were struck by a white convertible, and throngs of inebriated pedestrians reclaimed the vehicular traffic lane on Ocean Drive this past weekend, residents are once again debating whether cars should be allowed on the busy party street.

“It felt like a war zone: The police were the army trying to hold onto their territory, and their territory was keeping the street open to cars,” Matthew Gultanoff, founder of Better Streets Miami Beach, tells New Times. “Their strategy is that keeping the street open to cars will somehow make it safer by allowing less congregating and partying. But they were like Moses trying to part the Red Sea, and it failed.”

In previous years, Gultanoff explains, the City of Miami Beach barricaded Ocean Drive from cars to accommodate the influx of tourists to the area during spring break. That didn’t happen this year.

“On multiple nights, pedestrians organically spilled out onto the street, taking it and making it pedestrianized,” he says. “That’s the natural feel of the street, and how it’s meant to be.”

Miami Beach Police Department (MBPD) spokesperson Ernesto Rodriguez confirmed to New Times that “a portion of Ocean Drive was temporarily restricted Friday evening as the significant spillover from the beach to the street created a safety concern. It was later reopened.”

“THE PEOPLE HAVE SPOKEN”.

After being closed to cars for nearly two years amid the pandemic, one southbound lane of Ocean Drive between 5th and 13th Streets was reopened to cars in late January of this year. The northbound lane and street parking were converted into a bike lane, along with a barrier of striped “armadillos.”

But that in no way settled the debate about whether cars are the problem or the solution to the ruckus and growing public safety concerns on that stretch of South Beach. Residents remain staunchly divided on what to do and took to the Miami Beach Community Facebook group over the weekend to air their grievances.

Proponents of keeping Ocean Drive car-free argue it removes a chaotic variable from the mix and makes the area safer and more pleasant for pedestrians.

“I never understood why in the first place a car lane would stop the madness. If anything, it adds more accidents,” one resident posted.

“Whose bright idea was it to add automobile traffic to an already chaotic atmosphere?” wrote another.

We were told that we must bring back cars to #OceanDrive. That the only way to prevent people from “congregating” and “partying” was to erase our dream of a world class pedestrian promenade and have cars replace people.

Meanwhile, those opposed to keeping Ocean Drive car-free point out that the policy not only reroutes drivers to more-residential areas of South Beach, but it makes the hotels, restaurants, and bars on that stretch less accessible to patrons.

“And the cars and craziness moved into the residential district. Thanks a lot for more failed policies,” another person complained. “One lane is not a reopen. Useless bike lanes right next to a better place to bike was not a reopen.”

Nor can city leaders agree about what to do.

“I really believe closing the street was a mistake because we didn’t have a plan, and that lack of a plan just allowed people to gather in the middle of the street,” Miami Beach City Commissioner David Richardson told NBC6 when the car lane reopened in late January.

“The Pedestrian segment of Ocean Drive is truly inspiring, while vehicle behavior remains concerning,” he posted last Wednesday on Facebook. “As an advocate for #PeopleNotCars I will continue to advocate for further pedestrianization. The #QualityOfLife and safety of our residents and visitors are of the utmost importance to me.”

Gultanoff, a South Beach resident who rides bikes with his 4- and 6-year-olds, tweets out examples of cars driving in the designated bike lanes. He calls it “a recipe for disaster.”

“On Monday mornings, I always see new tire marks on Ocean Drive from [drivers] trying to do burnouts,” he says. “Even though most evenings they can only move at 2 mph, people are certainly showing off in their cars and it’s only a matter of time before a car goes careening into a couple of thousand people and we have a catastrophe on our hands.”