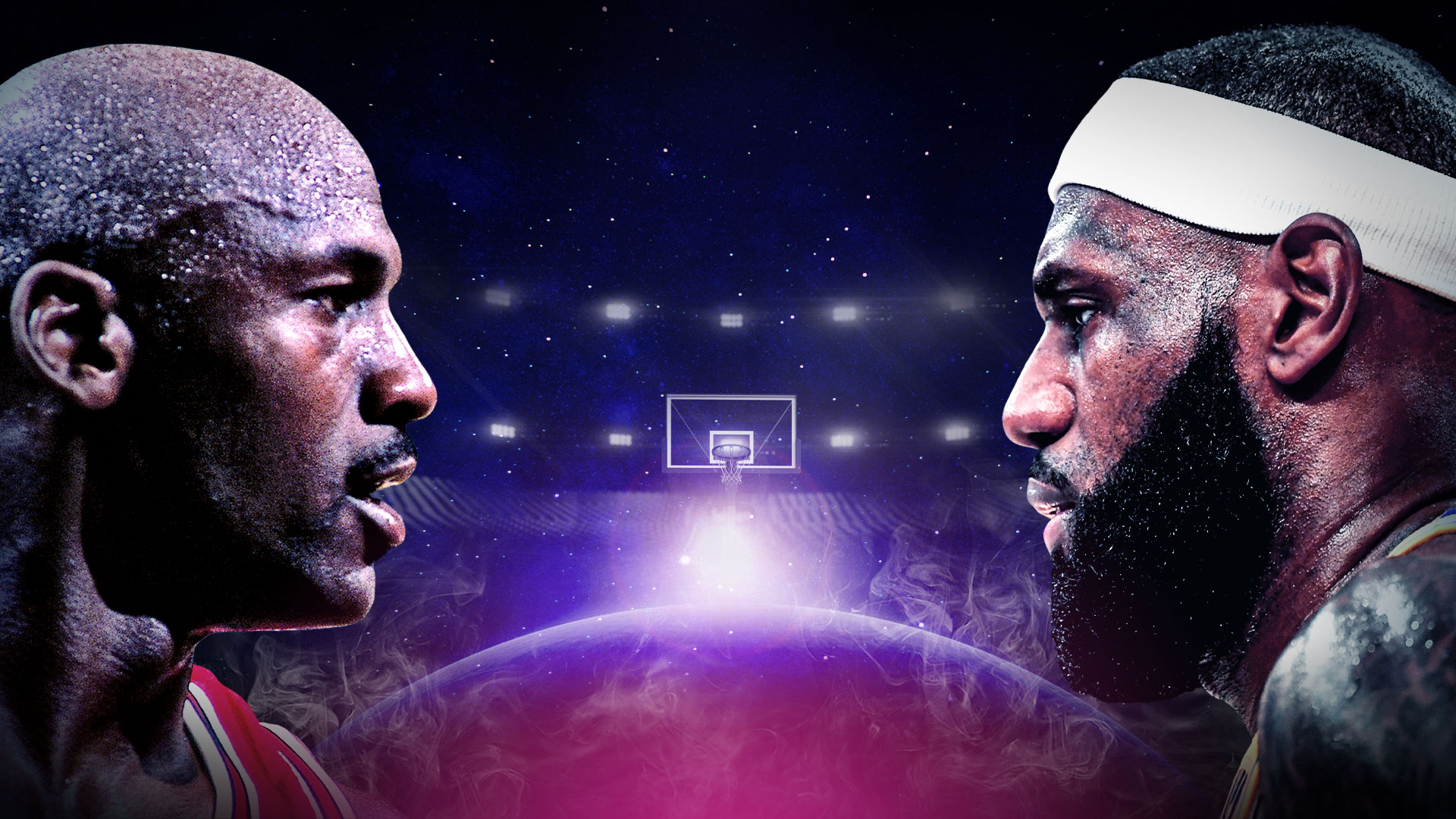 On Nov. 15, 1996, Warner Bros. released a film that would change the course of human history — at least that’s what a bunch of millennials would tell you.

“Space Jam” hit theaters 25 years ago and went on to become the highest-grossing basketball movie of all time. (No, I’m not making that up . Seems crazy, right?) For a certain generation, the battle between Michael Jordan’s Tune Squad and the Monstars was the peak of cinema.

Then, on July 16, 2021, Gen Z got its own special serving of animated madness. “Space Jam: A New Legacy,” featuring LeBron James in the leading role alongside Bugs Bunny and the other Looney Tunes characters, topped the box office on its opening weekend despite also being available to watch on HBO Max.

Because there aren’t already enough debates involving Jordan and James, it is time to definitively decide which “Space Jam” is the superior movie. I watched both the 1996 and 2021 versions of “Space Jam” back-to-back ahead of the 25th anniversary of the original and took several notes during each viewing. (For example, I wrote the words “Foghorn Leghorn just got murdered,” “Bugs is drunk off carrot juice” and “Why are aliens running a crappy amusement park?”) Then, I broke things down into five categories in order to crown a winner.

Full disclosure: I am part of the milennial group, but I had not seen “Space Jam” in more than two decades and only remembered the basics of the plot. I went into this experience with an open mind — and left with a melted brain. Anyway, let’s jump into the first category…

I assumed this would be an easy win for James. He displayed legitimately good comedic timing in “Trainwreck,” and he has not been shy about playing the goofy dad on social media. (He did manage to sneak in a “Taco Tuesday” shoutout near the end of the film.)

Well, this was a closer race than I anticipated. For as much natural charisma as both guys hold, Jordan and James are both weirdly stilted.

Jordan barely changed the tone or volume of his voice. I never believed him as the MJ character, mostly because he was far too encouraging and never cursed out Porky Pig for being out of shape and not wanting it as bad as him. He got sucked into a golf hole and landed into Looney Tunes Land, and the only emotion he showed was mild annoyance after his round with Bill Murray and Larry Bird was cut short. (He probably had a few grand on the line.)

James often looked as though he was reading off a “Saturday Night Live” cue card , particularly during the scenes in which he attempted to connect with his son, Dom. Even the screenwriters acknowledged the limitations here, as James says during the film, “Athletes acting? That never goes well.” The shattering of the fourth wall doesn’t work when it’s what is actively happening on screen. (Also, it doesn’t work much in general outside of “Deadpool.” Man, I should have watched the “Deadpool” movies instead.)

Despite the underwhelming performance, James and “Space Jam: A New Legacy” take this round. We’ll see if this ruling forces Jordan to jump back into the acting game for “Space Jam: And I Took That Personally.”

OK, if you haven’t seen the “Space Jam” movies, I desperately need you to read these plot summaries from Rotten Tomatoes:

1996 : Swackhammer, an evil alien theme park owner, needs a new attraction at Moron Mountain. When his gang, the Nerdlucks, heads to Earth to kidnap Bugs Bunny and the Looney Tunes, Bugs challenges them to a basketball game to determine their fate. The aliens agree, but they steal the powers of NBA basketball players, including Larry Bird and Charles Barkley — so Bugs gets some help from superstar Michael Jordan.

2021 : When LeBron James and his young son Dom are trapped in a digital space by a rogue A.I., LeBron must get them home safe by leading Bugs, Lola Bunny and the whole gang of notoriously undisciplined Looney Tunes to victory over the A.I.’s digitized champions on the court: a powered-up roster of professional basketball stars as you’ve never seen them before. It’s Tunes versus Goons in the highest-stakes challenge of his life, that will redefine LeBron’s bond with his son and shine a light on the power of being yourself.

In “Space Jam,” an alien spaceship flys past Jordan’s minor league baseball game and blasts through a Piggly Wiggly parking lot. In “Space Jam: A New Legacy,” Porky Pig turns into Notorious P.I.G. and wins a rap battle in the middle of the basketball game. Don Cheadle plays the villain known as Al-G Rhythm, the aforementioned rouge A.I. The Goon Squad is full of NBA player-animal hybrids. These are just things you come to accept in the “Space Jam” universe.

MORE: Poking holes into the original ‘Space Jam’ with an honest trailer

But by far the most absurd aspect of either movie was Jordan getting dropped off by Stan Podolak (played by Wayne Knight) in this car and in front of this house.

Jordan, one of the most famous human beings on the planet at this time, lives  here ? I’ll accept aliens sneaking into Madison Square Garden to steal the powers of NBA All-Stars, but this is a bridge too far. Totally ridiculous.  A victory for the original.

Use of Looney Tunes

“Space Jam” delivers some classic Looney Tunes hijinks. When the pre-power Monstars arrive in Looney Tunes land — which is apparently inside the Earth’s core? — Bugs Bunny goes through his whole silly routine and drops a one-liner of “Diminutive, ain’t they?” When they call Jordan a chicken, Foghorn Leghorn replies, “I resemble that remark.” There were solid Wile E. Coyote and Road Runner gags, too. (I had forgotten that the Coyote is one of the more demented characters in entertainment history.)

“Space Jam: A New Legacy” took a different route, throwing the Looney Tunes into other Warner Bros. properties and giving them a more modern look during the basketball game against the Goon Squad. The updates are understandable considering the climax occurs in a digital world, but something is just … off.

Early on in “Space Jam,” Jordan can be seen eating McDonald’s in what appears to be a motel room in which mob hits regularly take place. As if that wasn’t obvious enough, Podolak then enters the room and utters this: “Come on, Michael. It’s game time. Get your Hanes on. Lace up your Nikes. Grab your Wheaties and your Gatorade, and we’ll pick up a Big Mac on our way to the ballpark.”

Incredible work. Newman from “Seinfeld” knocked them all out in seconds. He wants to go to McDonald’s while Jordan is eating McDonald’s.

However, “Space Jam: A New Legacy” is on another level. The original snuck in advertisements. The 2021 version is one giant advertisment for Warner Bros. Here is a sampling of the properties that pop up:

On top of all that, when James crashes into Tune Land, he literally leaves a Swoosh-shaped hole in the ground.

A single tear is streaming down Darren Rovell’s eye. Go brands! We’re all tied up at 2-2.

I was hoping this final category would be a hotly contested, winner-take-all contest, but it turned into a blowout.

While there is some general silliness in the “Space Jam” game — that psychopath Wile E. Coyote puts dynamite on the backboard — it follows the rules of basketball for the most part. The Tune Squad falls behind early, then mounts a wild comeback punctuated by Jordan’s game-winning bucket. (He stretches his arm from half court to the basket because this is Looney Tune Land. The Monstars should have used a take foul.)

The “Space Jam: A New Legacy” game is an absolute mess. It’s based off the rules of a video game that Dom has designed, so players can earn “style points” and use power-ups. At one point, the score is 1,039-37 in favor of the Goon Squad. Dom switches from the Goon Squad to the Tune Squad in the middle of the game. Uh, sure?

MORE: Bill Murray wants credit for his role in the decisive game-winner

Similar to Jordan, James hits a buzzer-beater to give the Tune Squad the victory. Dom throws a power-up under James’ feet to give him the necessary vertical leap to finish at the rim or something. I don’t know. Ernie Johnson and Lil Rel Howery were calling the game, so the whole thing could have been a hallucination.

Putting the analysis aside, there is one big reason why the original triumphs over the reboot: It is much shorter. “Space Jam” clocks in with a runtime under an hour-and-a-half, while “Space Jam: A New Legacy” is closer to two hours.

These are not good movies. I cannot stress this enough, especially for my fellow millennials. The nostalgia has clouded your judgement. I realize they are designed for children, but if the goal is to entertain a younger audience, just select any Pixar film. There are four “Toy Story” movies.

Or, perhaps I’m wrong. Is Moron Mountain a commentary on the relationship of employer to employee and the pitfalls of capitalism? Is Al-G Rhythm a cautionary tale about the use of A.I. and the true cost of modern technology? Will I never be as happy as I was watching the original back in 1996 while dunking on a Fisher Price hoop?