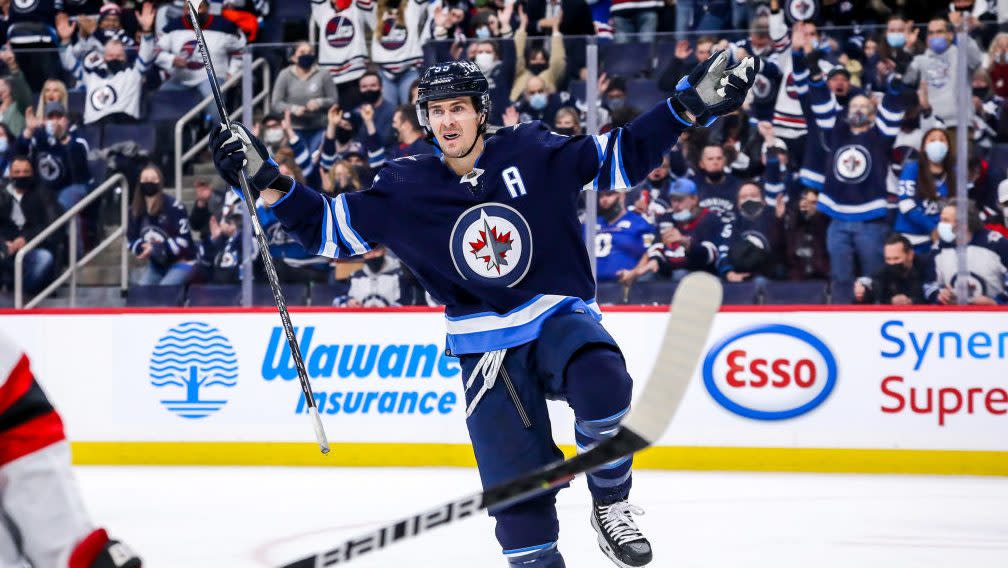 Top players from Friday in the NHL

Heading into Friday’s NHL games, the Jets were struggling to score, and Mark Scheifele wasn’t immune to those issues. A player who has averaged over a point-per-game since 2016-17 only managed eight points through 16 contests.

This might not signal the end of the Jets’ struggles, but maybe Scheifele is back. He generated a hat trick and an assist for four points as the Jets dismantled the Devils.

In an 8-4 game, it’s not surprising that Scheifele wasn’t the only Jets scorer enjoying a big night. Blake Wheeler (generally even colder than Scheifele) collected three assists. Nikolaj Ehlers scored two goals and Pierre-Luc Dubois nabbed two assists. Obviously, not a perfect game by Winnipeg, but it’s important for them to occasionally win without Connor Hellebuyck being all-world.

Had to feel good for Adam Larsson to score a goal against the Oilers, his former team. Nice moves, too.

That said, Larsson’s own Kraken teammate Colin Blackwell scored an even better goal.

As you can see, Mark Scheifele collected his fourth career hat trick during Friday’s NHL action.

From Matthew Tkachuk‘s shootout move to an array of splendid passing plays, there was a lot to enjoy in Flames – Ducks. So why not soak in the full Flames – Ducks highlights, then?

Rangers get an injury scare with Igor Shesterkin

Despite downright alarming underlying numbers, the Rangers keep cooking this season. They won their fifth game in a row by shutting out the Sharks on Friday. Ultimately, Igor Shesterkin and Alexandar Georgiev combined for the shutout, however. That’s because Shesterkin caused some nervous sweating at Madison Square Garden when he left with a lower-body injury.

At least the early word is optimistic.

After the Rangers’ win, Gerard Gallant said he was told that Shesterkin’s injury isn’t as bad as it looked. It’s currently viewed as a minor lower-body injury.

Now, that leaves a lot of room for interpretation. Could “not as bad as expected” mean weeks instead of months? Just day-to-day (and in the less torturous way than some day-to-day injuries can play out)? The Rangers may know more about Shesterkin’s injury status sometime this weekend.

Losing the so-far-elite goalie could test the very good thing the Rangers have going.

Was it a trip? A slew-foot? Either way, P.K. Subban was at it again

So, uh, P.K. Subban sure has developed a … uh, habit of this stuff, huh? Nikolaj Ehlers was not happy with this trip/slew-foot/whatever you’d like to call it.

Slew-footing vs. tripping has bubbled up as a topic of debate lately. In Brad Marchand‘s case, he received a suspension for slew-footing Oliver Ekman-Larsson. The league emphasized a couple of things while explaining Marchand’s suspension. One was the speed both players were traveling at. The other is a key distinction (for the NHL) between slew-footing vs. tripping. They believed that Marchand’s use of both his upper and lower-body made the difference.

Meanwhile, P.K. Subban’s skated by with fines instead of suspensions based on that slew-footing/tripping distinction. Will there be any fine or suspension for Subban’s trip (or was it a slew-foot?) on Ehlers? At some point, you wonder if the league might want to more broadly crack down on dangerous trips, even ones that don’t technically qualify as slew-footing. Either way, it’s been dangerous to engage with Subban lately.

Neither the Wild nor the Maple Leafs have enjoyed much playoff success in quite some time. Judging by their rabid fans, if you’re in Toronto or Minnesota with any regularity, you’ve probably heard all about it.

While the Maple Leafs’ angst has been more operatic, the Wild also might have a “believe it when we see it” feel to most levels of success.

So, maybe these two teams will brush of hype, but Maple Leafs – Wild is hype-worthy on Saturday. Both teams are riding five-game winning streaks. Each team has been hot beyond that (in their last 10 games, the Maple Leafs are 9-1-0, while the Wild are 7-2-1).

In the cases of both the Maple Leafs and Wild, there are some elements of “what goes up, most come down.” Toronto could teeter if Jack Campbell stops performing as the world’s cheapest Vezina Trophy candidate. Minnesota probably can’t keep scoring at this pace.

Yet, from a big-picture standpoint, the Maple Leafs and Wild look legit. Delightfully, these are two teams who are red-hot, but could also keep delivering. It should be a treat to see them duke it out.

James O’Brien is a writer for Pro Hockey Talk on NBC Sports. Drop him a line at phtblog@nbcsports.com or follow him on Twitter @cyclelikesedins.