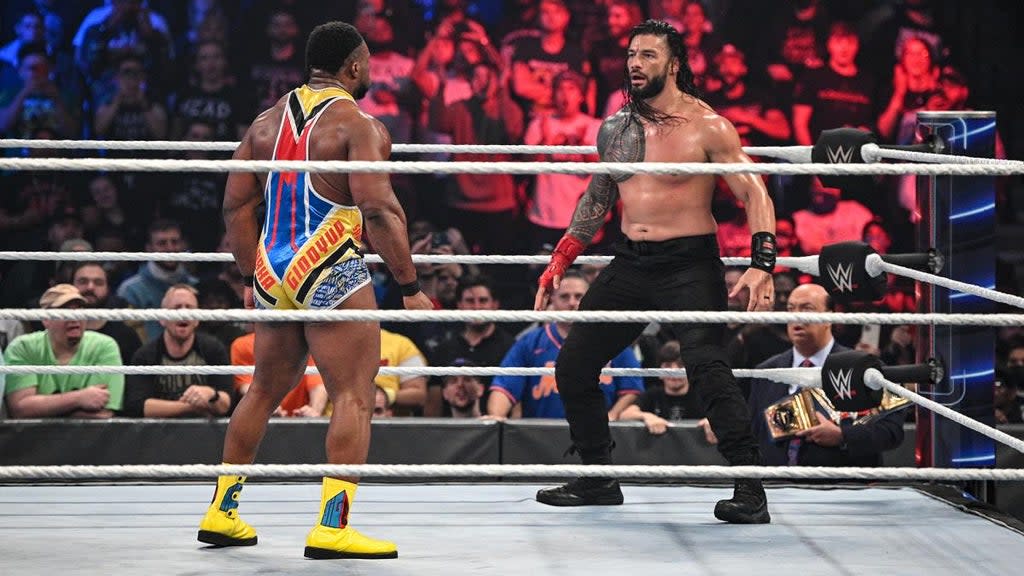 As with the last few years, the show was built around the faux battle for brand supremacy as warring superstars from opposing shows Raw and SmackDown collided in high-profile meetings.

Whilst a couple of them did deliver – the collision between Becky Lynch and Charlotte Flair and the meeting of Roman Reigns and Big E – much of the intensity was missing elsewhere.

The company’s biggest issue is in hamstringing itself by holding its annual draft just weeks before this marquee event, meaning wrestlers have only actually been representing their shows for a brief period. Asking fans to invest in their apparent loyalty to either team red or blue is therefore a bit of a stretch and that showed once again at times.

Nonetheless, there were notable exceptions in the two primary title matches. Reigns and Big E closed the show in the night’s clash of the big heavyweights. Here we had a short-term story that fans could invest in, the WWE Champion’s thirst for revenge following Reigns’ attacks on New Day brethren Kofi Kingston and Xavier Woods.

Reigns was always likely to be victorious here as his dominant run as Universal Champion on SmackDown continues and did so after persisting with offence on Big E’s knee, eventually nailing a spear for the three count.

WWE’s two top female champs collided as Lynch and Flair came to blows. The two have reportedly developed legitimate animosity away from the world of storylines after a backstage clash, but it’s just as likely the company is exploiting a minor altercation in one of its infamous blurring of lines.

In any case, their match was an excellent watch and one of the better of the evening. The megastars structured a well-paced match that ended well before it had a chance to stagnate or run long. After changing blows, holds and attempted submissions, Lynch managed to snare the victory through back-door methods after holding the ropes for a pin, ironically after the referee had just thwarted Flair’s attempts to do the same.

That wasn’t the end of the good stuff completely – the New York crowd ate up a performance by legend Jeff Hardy in the traditional men’s Raw vs SmackDown elimination tag. Typical tomfoolery by newly established heel Kevin Owens at the outset of this one saw him effectively eliminate himself after walking off and getting counted out. After all was said and done, it was down to veteran Hardy and Rollins in what is in itself a dream battle for fans. Again, the logical result followed as Rollins picked up the win for team Raw, but not before the crowd got right behind Hardy’s rally.

The rest of that match was fine but was too formulaic in consisting of individual bits of personal animosity or a need to be eliminated without looking weak (Drew McIntyre and Bobby Lashley among them.) To a point it was similar in the women’s bout with Sasha Banks lost too cheaply to a count out, but this was arguably the better of the two tags, thanks in part to being able to watch Banks and Bianca Belair go at it again for a few minutes.

Belair would end up the star of this part of the show as WWE again gave the hugely talented star a ringing endorsement by having her win the match for Raw as the sole survivor, eventfully finishing off the last of SmackDown in Shotzi.

Another match seemingly always bound to deliver was the meeting of the blue and red tag team champions as Rated RK-Bro picked up a win over The Usos. Orton was the star of the show in claiming victory with an awesome RKO off a top rope splash – this on the night where the third-generation talent toppled the record for most pay-per-view matches in WWE history.

There was the silliness we’ve come to expect on major WWE shows – commercial delivery seemingly the driver behind Omos winning a Pizza-hut inspired Battle Royal that had weakly been named after The Rock on what was the 25th anniversary of Dwayne Johnson’s wrestling debut with the company.

WWE weren’t shy in milking The Rock on the show – they aired video packages from the Hollywood star’s career throughout and even had Vince McMahon pratting around with a golden egg supposedly from Johnson’s latest blockbuster. The fun was all well and good, but it was clearly an attempt to build a belief that the man himself would appear at the event, leading to disappointment when he inevitably didn’t.

On the Survivor Series Kick-Off, Intercontinental champ Shinsuke Nakamura bested US Champion Damian Priest by disqualification in a brief offering blighted by more nonsense and a guitar wielding Rick Boogs.

Some of the needless extra-curricular at Survivor Series left a bad taste in the mouth for what had always been one of WWE’s top four big shows of the year. But there was plenty of fun to be had on the night and more than enough quality wrestling to leave fans happy.

‘That’s something I’d love to do’: Becky Lynch addresses rumours of Hollywood career