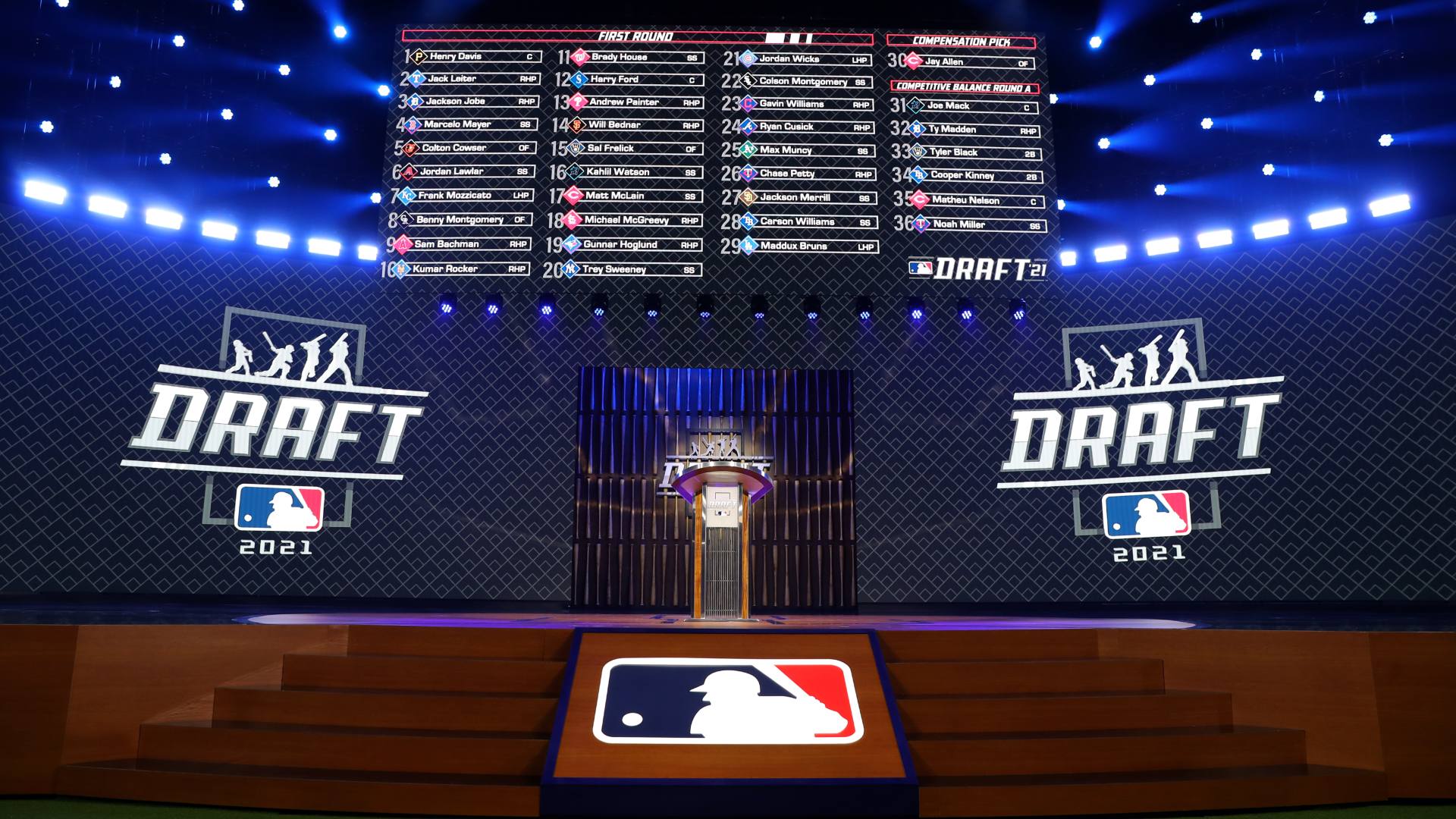 Baseball has a competition problem.

Stripping a roster to bare bones and losing at those levels is a massive detriment to baseball’s overall health. It doesn’t have to be this way. There’s a simple solution to eliminate this annual race to the bottom. We’ll get to that in a moment.

And with that win-win scenario for owners and front offices, really, who can blame the them for taking advantage of the setup? Problem is, this is really a win-win-lose scenario, and it’s the fans of the tanking teams who are the biggest losers. It’s a legitimate question: Why should baseball fans — or, maybe more importantly, potential baseball fans — spend their money and time and passion on the current product when the owners clearly aren’t?

It’s not that every franchise with a losing record is to blame. Far from it. You can try to field a competitive baseball team with a shot at reaching October and fail. It happens. Look at the three teams that finished the 2021 season with identical 77-85 records.

The Mets started very well but collapsed when injuries and struggles were too much, despite their efforts to bring in reinforcements (such as Javy Báez). The Tigers scuffled big-time to start the season, but played better than .500 baseball the last four months of the year. The Angels have tried and failed to land much-needed starting pitching help the past few offseasons, and when superstar Mike Trout went down and starters Dylan Bundy and Andrew Heaney were significantly worse in 2021 than in 2020, they spent another year around .500.

Baseball’s problem is not teams that finish 77-85. They’re at least competitive. And it’s not that every franchise has to max out payroll every year to try to win a World Series.

Baseball’s problem is with a system that rewards teams for regularly pushing triple-digit losses, and something needs to change.

The fix starts with the MLB Draft.

If you finish with the worst record in the league, you get the first pick in the next year’s draft. If you have the fifth-worst record, you get the fifth pick, and so on. There have been a few wrinkles along the way — such as compensation picks — but that’s basically how it works. If every franchise is actually trying to win, that’s a fine idea, but that reverse-standings system is being exploited and needs to be scrapped. Just look at big-market teams such as the Cubs and Astros tanking for multiple years in a row to collect high draft picks.

Here’s the essential element of our idea: If you want to have a shot at the No. 1 pick in the next year’s draft, you have to put a decent product on the field for your paying customers in the current season. Right now, lower-budget teams essentially have to choose: Do we try to push for a playoff spot or sell off players to intentionally lose a lot of games and get an all-important high draft pick?

That shouldn’t be an either-or proposition.

Under this new system, which would require a draft-order lottery, every single team that misses the playoffs has at least a tiny chance at getting that No. 1 overall pick (the 10 playoff teams would get picks 21-30, by reverse order of standings). Every team either gets a shot at winning in October or a shot at a top draft pick.

In MLB’s new system, a target loss number (TLN) would be set — the average number of losses for the 20 non-playoff teams — and the teams that finish closest to that number have the best shot at the top pick; odds would decrease the further the team is away from the TLN (above or below, doesn’t matter).

It would be somewhat similar to how the NBA Draft works; last year, the Rockets, Pistons and Magic had the best odds (14.0 percent) of getting the top pick and the Warriors, the last team in the lottery, had just a 0.5 percent chance.

Last season, the Twins lost 89 games, so they would have the best odds for the top pick. After Minnesota, you’d have the Royals, who finished with 88 losses, one away from the TLN. In third place, a tie: The Rockies (87 losses) and Cubs (91 losses) would have the same odds, because they both finished two losses away from the TLN, and it doesn’t matter whether they were above or below that number. That’s important.

Here’s how the hypothetical 2022 MLB Draft order lottery would be ranked:

A couple of things to note: In this system, the 90-win Mariners and 91-win Jays would have better odds — still tiny odds, but better — than the 110-loss Orioles and Diamondbacks because, again, the goal is to punish tanking. And, you’re probably thinking: “Well, if the Orioles and Diamondbacks knew losing 110 games would give them the worst chance at getting the top pick, they probably would have tried to win more games.”

Let’s look at the 2021 Reds and Nationals as an example. At the end of June, the Nationals were 40-38 and the Reds were 39-40. The Nats had an awful July and dealt away everything that wasn’t battened down at the trade deadline. The Reds had a good month, and while they didn’t make any big acquisitions they didn’t trade their stars, either.

The Nationals bottomed out, going an avert-your-eyes 17-41 the rest of the way. Fans who had purchased tickets hoping for a playoff race instead watched, essentially, a Triple-A team at MLB ticket prices. The Nats finished 65-97. Cincinnati was a half-game out of an NL wild-card spot when the calendar flipped into September (a half-game better than the future World Series champion Braves) but a bad month ended the Reds’ chances and they finished with an 83-79 record.

As things are currently set up, the Nationals are rewarded for their decision to pivot to all-out tanking with the No. 5 pick in the 2022 MLB Draft. The Reds, who tried to compete and failed, get the 17th pick. In this proposed setup — because it doesn’t matter whether you’re above or below the TLN — the chart above shows the Reds would be in line for the 13th overall pick (they were 10 away from the TLN), should the draft lottery results stick to the odds. The Nationals would be 11th (eight away).

Imagine that, rewarding teams for actually trying to win games instead of losing as many as possible, as quickly as possible.

This system eliminates the ridiculous “compete or tank” choice for lower-budget teams. You want 30 competitive teams with at least mildly satisfied fan bases? Give all 30 teams a system that allows them to both field competitive teams AND get good draft picks. It’s not difficult.

Mostly, though, this would prevent teams from tanking as a strategy, and that’s the most important thing. If owners want to strip a roster down to bare bones to save money, that’d still be their prerogative. But in that scenario, their tight-fisted intentions would be clear; they wouldn’t be able to claim the primary motivation is to get better draft picks, with the savings just an irrelevant, pleasant bonus.

Consider this: According to multiple sources, MLB’s first CBA offer to the MLBPA last month included a salary floor of $100 million per team. Once again, for those in the back, the owners — the group directing MLB’s negotiating position — offered that number, which means they know that’s a realistic payroll for each franchise to carry, or could be with a few tweaks. Ten teams had total 2021 payrolls under $100 million; Miami, Pittsburgh, Baltimore and Cleveland were all under $60 million for the season. If a $50-something million payroll was truly all those four franchises could support, if they were absolutely tapped out, with nothing left, the owners as a group would not have proposed a salary floor of $100 million.

Owners have money. Owners are making money. Have no doubt.

Ask yourself why so few owners are selling franchises these days if they legitimately can’t afford the level of payroll necessary to field a competitive team. Only three teams have been sold since 2012, and all three went for at least $1 billion. Ex-Marlins owner Jeffrey Loria bought the franchise for $158.3 million in 2002 and sold it for $1.2 billion in 2017. The Royals were sold because longtime owner David Glass was 83 and in failing health; the franchise went for $1 billion. The Mets were sold for $2.4 billion because the Wilpon family had troubles outside baseball that prompted the sale. MLB owners are not hurting.

Let’s say a franchise could really use the type of talent influx only multiple Top 5 draft picks can provide. The Astros lost 106, 107 and 111 games in consecutive years (2011-13) and got No. 1 draft picks that netted them Carlos Correa and Alex Bregman (the latter in a roundabout way). Their Opening Day payroll bottomed out at $26 million in the 111-loss season of 2013. It’s not that the Astros couldn’t afford a “normal” salary structure; they were between $87 million and $102 million from 2007 to 2010 and they’ve been above $124 million since 2017 (not counting the pandemic-shortened 2020). That low payroll — money pocketed by ownership — was just a big ol’ bonus.

Under this proposed system, teams could do the same type of draft-pick rebuild with three consecutive 89-loss seasons instead of 107-loss seasons. The owners would likely need to maintain higher payrolls, yes, but fans would have more interest in teams that are actually competitive on a daily basis. Isn’t that better baseball for everyone to watch? Baseball’s not going to grow as a sport when up to a third of its teams aren’t competitive. Who’s going to buy tickets to those games?

With this system, the goal for every team in the offseason would be to build at least a relatively competitive roster. If things go right, maybe they push toward the 90-win plateau and sneak into the playoffs (that’s especially possible if the postseason is expanded starting in 2022), and then who knows what happens? Remember, the team with the lowest win total to reach the 2021 postseason — Atlanta, with 88 — wound up winning the whole thing, and that’s not an outlier. Since 2010, four teams with 92 or fewer wins have won the World Series. Chip and a chair gives you a chance, right?

And if a front office builds a roster it expects to be at least reasonably competitive and things go wrong, the team winds up with 90-ish losses and is in the conversation for the No. 1 draft pick. That’s not so bad.

Either way, every team is fielding a competitive team, knowing that a 105-loss season tanks their chances of getting a high draft pick. And that, of course, is the point.