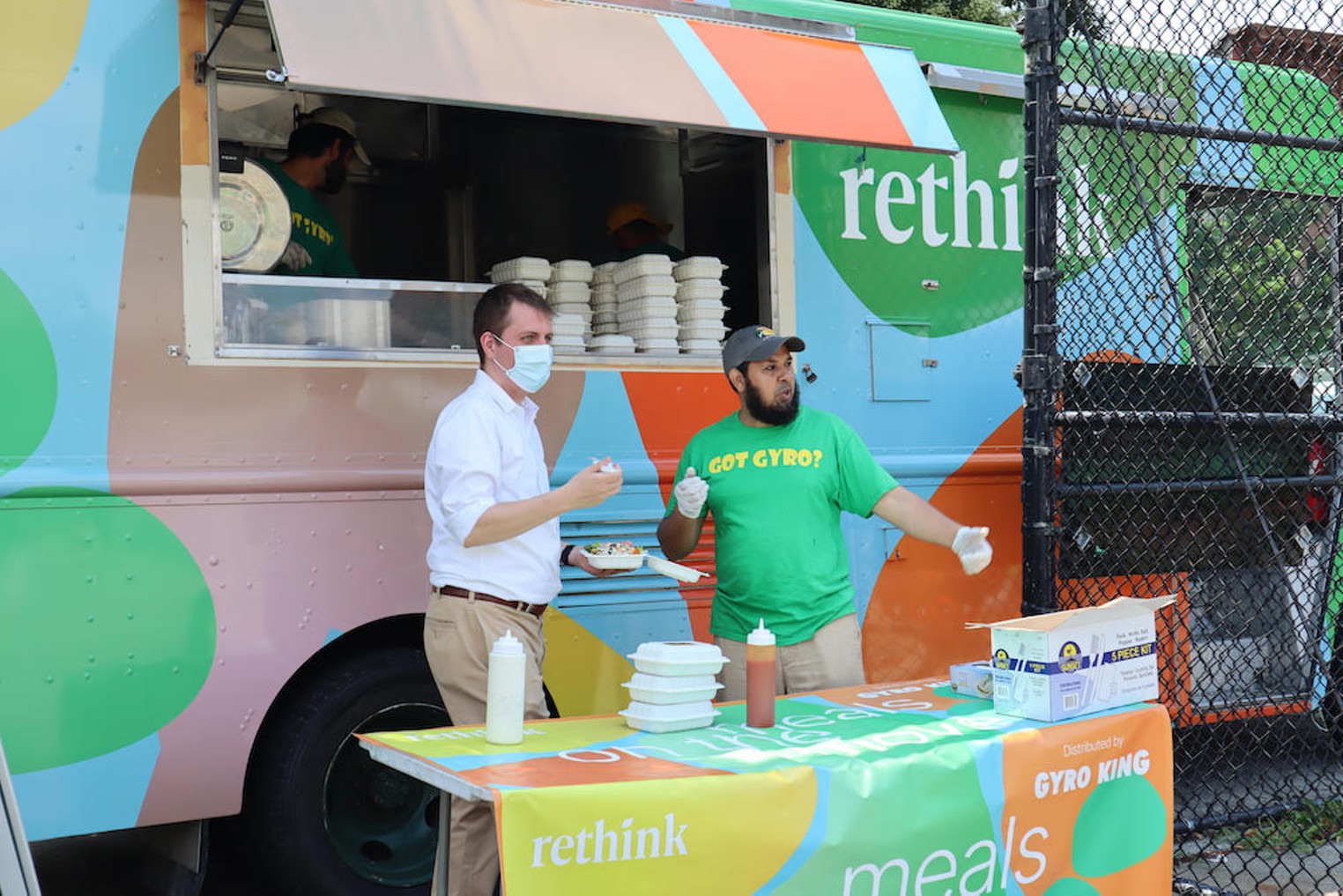 Rethink Food, a nonprofit working to improve equitable access to nourishing, culturally appropriate meals, is expanding its service to some of Miami’s neediest neighborhoods.

In the coming months, Michael’s Genuine Food & Drink in the Design District will provide rent-free commissary space for Rethink’s expansion. When it reopens this winter after completing renovations, the restaurant will add a surcharge to guests’ checks to help fund the Miami program.

According to a 2019 study published by Florida International University’s Miami Urban Future Initiative, Miami is home to the second-greatest income inequality in the U.S. This explains how 10 percent percent of Miami residents — including 14 percent of children — face food insecurity, even as billionaires continue to flock to the Magic City. Forty percent of Little Haiti’s residents live below the poverty line, compared to 4 percent of their neighbors in the Upper Eastside, according to U.S. Census data.

“We tried to buy the ingredients in local stores, and it was really challenging. Just trying to find lettuce, I had to go to five places,” Jozwiak tells New Times. “And students hadn’t even seen a lot of the ingredients. In a group of ten, about four or five of them had not seen a salad. They said, ‘That’s raw. You can’t eat that.’ It was really eye-opening.”

Jozwiak developed relationships with local food-distribution organizations and other nonprofits, learning what worked and what didn’t. Utilizing these lessons in efficiency, he began a pilot program for Rethink Food in 2017.

From the start, Jozwiak and his crew made sure the food they prepared was culturally reflective of the communities they served — and delicious.

“There are free school-lunch programs where the meals are prepared for $2.20, but it’s terrible and so kids may eat one thing and throw the rest away,” Jozwiak says. “It’s so much wasted effort. We do regular taste tests to make sure we’re serving tasty food, and food that is familiar to the people who will receive it.”

At first, he and other Rethink Food chefs did all the cooking. Community centers would tell them how many meals they needed. Then Rethink would collect excess food from participating local restaurants and corporate kitchens and turn it into ready-to-eat meals to be distributed at the centers.

When COVID hit, Jozwiak sought to decentralize the food prep, for safety’s sake. “It seemed dangerous to have 15 chefs packed into one space,” he says. That’s how he arrived at the idea of having smaller groups at local restaurants prepare the meals, which is how Rethink primarily operates today, and how it has begun to function in Miami.

Jozwiak says Rethink’s move into Miami is happening largely because Sunil Bhatt and Chef Michael Schwartz of the Genuine Hospitality Group (the company behind Michael’s Genuine Food & Drink) begged for it.

“They were adamant about it. They were like, ‘We need to do something in our neighborhood. How do we help? We’ll do anything,’” Jozwiak says.

Soon enough, Jozwiak was convinced to board a plane to Miami and investigate. He toured facilities like the Miami Rescue Mission and was impressed with the huge operations they had going, feeding thousands of people each day.

“Miami seems like the perfect place for us to help,” Jozwiak says. “The restaurant community is so excited about the ability to do it. We can work really well when we go into places where things are already happening in some way shape or form, and we just come in and help organize and supercharge it.”

Gepsie M. Metellus, executive director of Sant La Haitian Neighborhood Center, says the program has already been a lifeline for many families in North Miami.

“It’s been a phenomenal partnership, and the invitation came just in time. We have been seeing an uptick in people asking if we would have food distribution again because we did in the past, and it ended. So when this opportunity came up we were tickled pink, and so were our clients,” Metellus says.

The two participating restaurants in Little Haiti were hit hard by the pandemic, Metellus adds. Because of Rethink Food’s involvement, they’re now getting massive standing orders three times a week. They’ve also been able to hire more workers thanks to the influx of cash and demand.

“It’s wonderful that they’re keeping the dollars going around in the community, and that the food they make is culturally familiar to our clients, who are both of Haitian and Latinx descent,” she says. “There is a great need and families are dependent on the food. Some of our neighbors can’t believe it. They think in this great country of ours, there is zero hunger. But that’s not what we’re seeing. It’s kept a lot of children and families from being hungry.”

She says food distribution generally starts at 11 a.m. and ends at 1 p.m. on Mondays, Wednesdays, and Fridays. By closing time, every single meal is gone. Enthusiasm for the program has also spurred a flood of volunteers to help with bagging and distribution – some of whom were once recipients of Sant La’s food distribution.

Meals prepared by Pack Supermarket & Cafeteria are currently being distributed by the Miami Rescue Mission in Wynwood.

Michael Schwartz of Michael’s Genuine says donating space and money are the first steps in what he envisions will be a longstanding partnership with Rethink.

“Everybody cares about food insecurity, and any chef or operator would be excited about this,” Schwartz says. “We get to do what we do, make food for people, and feel like we’re making a difference. We all want to help, but most of us don’t know how. Rethink Food has figured out all the logistics and made it so easy to get involved, I feel like everyone would say yes to this — it’s all low-hanging fruit.”