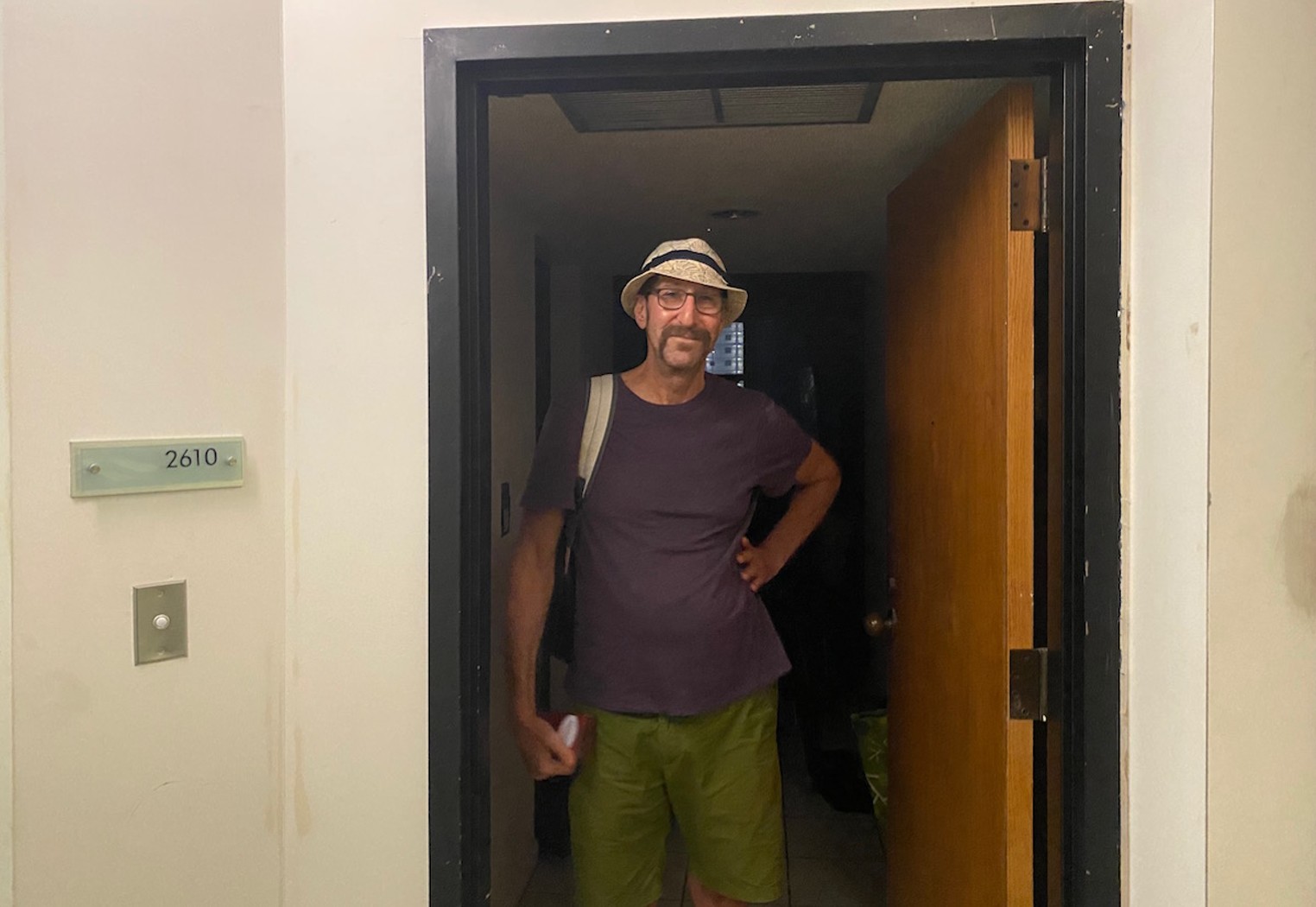 With each passing day, it’s becoming increasingly difficult to be the last man standing.

As a full slate of repairs and renovations at the Hamilton on the Bay apartment complex remains underway, Steve Leidner — the building’s only remaining tenant following a mass exodus of residents whose leases were terminated by the owner — says the already untenable living situation has become increasingly volatile.

Since the last of Leidner’s fellow tenants left the Edgewater building a few months back, the lone resident has stood his ground and is pursuing legal action against Aimco, the company that owns the building. Earlier this year, the Denver-based real estate investment and management company informed residents across the 28-floor, 275-unit complex that they would be forced from their homes, citing “irreversible damage” to the building’s sewage and drainage system.

Now, at least 17 former residents have joined up with their last man standing. They, too, are taking the real estate behemoth to court, alleging in a newly filed complaint by attorney David Winker that Aimco took advantage of the Hamilton residents and forced them out of their homes without sufficient compensation.

“Had tenants been informed of the true condition of the property, including, but not limited to, the supposed critical condition of the sewage pipes, tenants would not have signed the residential lease,” states the November 10 complaint.

Leases had a termination clause and addenda that warned of the possibility that the building might be redeveloped. It wasn’t until a May 17 email, however, that most residents figured out that meant they had barely two months to find a new place to live as their units were gutted for renovations.

“These complaints are based on the same facts, of Aimco failing to respect leases that it entered into and trying to take advantage of its customers,” Winker tells New Times. “As outlined in the complaints, we believe this was fraud, and the people are standing up for their rights under the agreement.”

The words “Vacant” and “Desocupada” have been scribbled on doors in black marker.

But Leidner — with his lease up in June of 2022 — effectively said ‘to hell with that,’ and remains in his one-bedroom unit on the 26th floor, with its postcard view of the city, where he’s lived for just shy of two decades.

These days, Leidner says, that the ceaseless chorus of jackhammers piercing concrete feels more like jackhammers piercing his peace of mind. Down in the lobby, a dusty and desolate tableau that would fit right in on Extreme Makeover: High-Rise Edition, if there were such a thing, a narrow walkway makes any journey to and from the complex “treacherous.” So much so, Leidner says, that the postal service stopped delivering his mail because the building has become too dangerous for carriers to come and go.

When the elevators don’t work, Leidner — whose vision is impaired and who has limited use of his left hand — has to rely on the two-dozen-plus flights of stairs. Recently, he says, he phoned the city’s non-emergency line to request that the fire department help get him to the ground level.

Steve Leidner in what remains of the Hamilton’s lobby.

When New Times last spoke with Leidner a month ago, an eviction notice had been tacked to his door and his water and electricity had been shut off. His utilities have since been restored after a judge granted an emergency motion, but service for the building’s utilities (and the elevator) has been intermittent, Winker reports.

“[Aimco has] to have some idea that the environment that exists is untenable,” adds the attorney.

Aimco’s attorney, Tony Recio, responded to New Times‘ questions via email, stating that the company has provided “generous offers of assistance” to Leidner, including offers to relocate him to a nearby two-bedroom apartment for the same rent.

Recio says the company booked Leidner a room at a nearby hotel when the elevators were being serviced and that, when the electricity went out on his floor, Leidner didn’t contact the property and instead “went to his lawyer and accused us of turning the power off to push him out.”

“We had 149 apartments occupied when we were forced to relocate our residents due to an infrastructure emergency and we didn’t evict anybody,” Recio writes. “Instead, we extended offers of assistance. It is very unfortunate that Mr. Leidner didn’t accept our financial and in-kind assistance. It is also unfortunate that Mr. Leidner has stopped cooperating with us…. He is not acting in good faith.”