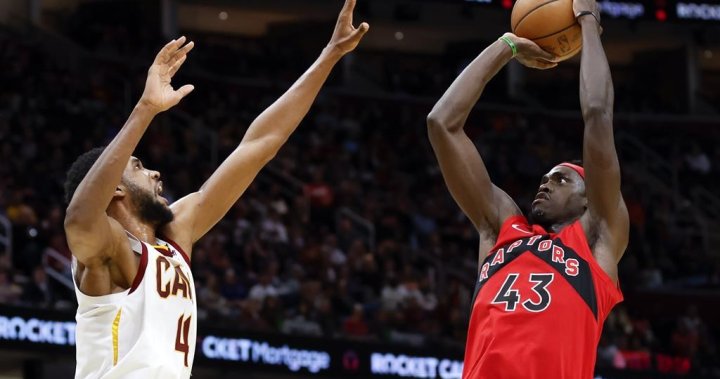 TORONTO – The Toronto Raptors’ post-season hopes have come down to 10 final regular-season games.

Eight of them are at home, in a what should be a noisy, jam-packed Scotiabank Arena after playing much of the home schedule in front of virtually a handful of family and friends, due to COVID-19 restrictions.

For a youngster such as Scottie Barnes, a front-runner for NBA rookie of the year, these games will be the most important of his career so far.

The Raptors host Cleveland on Thursday in a key game, sitting a game behind the Cavaliers for the sixth playoff spot in the Eastern Conference.

Coach Nick Nurse is eager to see how his team responds to the crunch of this stretch run.

“So it’s a funny time of year to try to put too much stock into it.”

The Raptors (40-32) are coming off a “hell of a run,” Nurse pointed out, that saw them win six consecutive road games against some tough opponents despite missing key players such as Fred VanVleet for some of it and OG Anunoby for all of it.


“If you would have looked at that going into it, you would have been ‘Oh boy,’” Nurse said. “And we came out of it I think beyond anybody’s wildest dreams. Beat literally all the top teams in the league the last time we faced ’em.

“I just want to keep building and keep playing and not get too caught up in what’s coming. I would say this again. If the playoffs started tomorrow, I feel like we’re ready … I don’t want to sit here and say, ‘Oh my god, we gotta cram for this. Oh my god.’ I’m not into that. I’m ready to just keep trying to play good each night as it comes.”

A top-six finish would mean an automatic berth, while teams that finish seventh through 10th face play-in games.

“I don’t see (top-six) as vital,” Nurse said. “I really hope this team gets in the playoffs. I really, really think we need to experience that, like a series, the prep and the toughness and all that stuff that I think would be a really big building block for this team to be able to go through that … However we get to it.”

Nurse hopes to have some players back healthy by then. He said VanVleet, who is hampered by a knee injury, won’t play all 10 remaining games. Anunoby (broken finger) hasn’t played since Feb. 16. He practised on Wednesday, but Nurse said he’s unlikely to play Thursday. He’d like to see him get in five games before the post-season tips off.

“So that turned out to be better news than we were possibly thinking,” Nurse said. “It’s still very, very sore.”

Pascal Siakam and Barnes have been largely holding down the fort. Siakam is averaging 22 points, 8.3 rebounds and 5.1 assists for Toronto, while Barnes is averaging 17.7 points over the last 10 games.

Siakam said he’d like to avoid a play-in scenario.

“Obviously why do you want to play another game instead of just being in the playoffs? Just win every single game and climb as much as we can,” he said.

He hopes having a full house of fans at Scotiabank Arena, which reopened at full capacity on March 1, will help.

“I think that we’ve definitely got to use our fans and (their) energy and use it as an advantage, we have to, because again, come playoff time, that’s something that’s super important,” Siakam said.

Precious Achiuwa was asked whether crunch time of a season is fun.

“It’s always fun to play for me,” he said. “But understanding the importance of these next games coming up, we understand we have to really, really dial in to these last couple of games because that is going to basically tell us where we stand come playoff time, whether that’s fifth place or sixth place or we are going to be in the play-in.

“We, as much as everyone else, are trying to avoid that play-in game so we’re just going to be a lot more locked in, a lot more focused. Put ourselves in a better position come playoff time.”

Thursday’s game is the first of four straight at home. The Raptors host Indiana on Saturday, Boston on Monday and Minnesota on Wednesday.

This report by The Canadian Press was first published March 23, 2022.