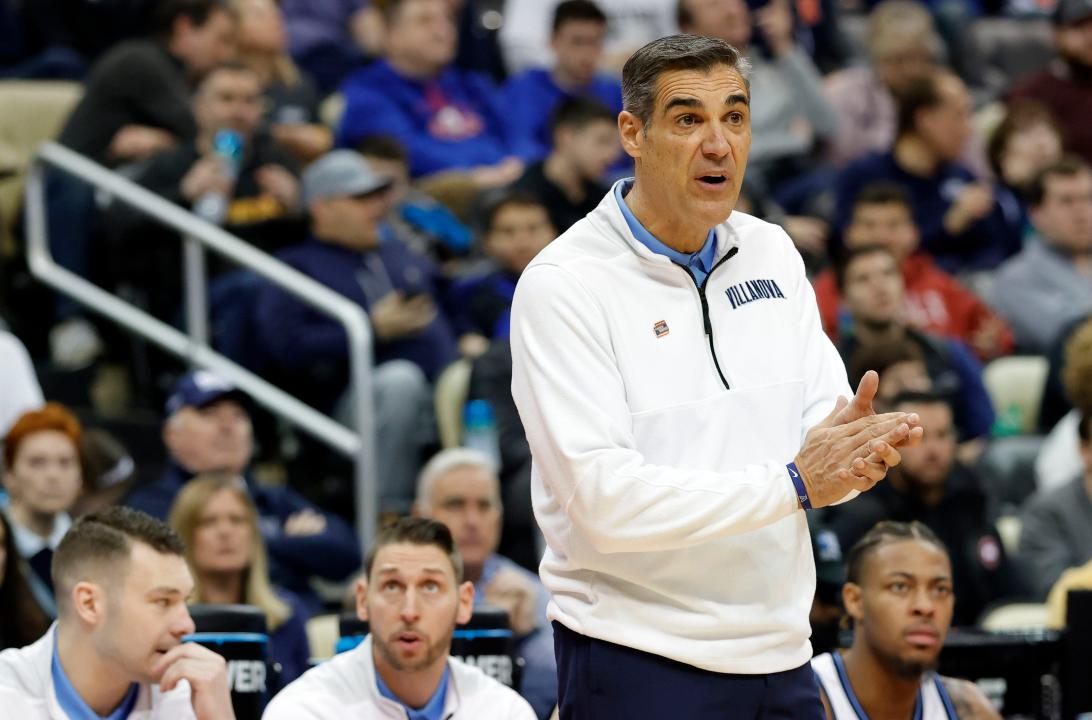 This year’s Sweet 16 features one of the strongest and most interesting groups of coaches ever in the second weekend of the NCAA Tournament. Among them, seven have been to the Final Four at least once. On the other end of the spectrum, three are in their first season as a head coach.

By historic accomplishments, obviously Mike Krzyzewski towers over the field with five national titles, 12 Final Fours and 26 trips to the Sweet 16. But which coach would you want on the sideline this year in a win-or-go-home scenario with everything on the line?

Here’s how I’d rank them.

Strange, but true: There was a time when Wright was considered a bit of a March Madness underachiever. After breaking through for his first Final Four in 2009, Villanova went six straight years without reaching the Sweet 16, including three second-round losses as a No. 1 or No. 2 seed. But two national titles later, Villanova has arguably been the nation’s most clutch program, playing with the same cool confidence Wright exudes on the sideline. Tournament games often come down to which team can execute easy offense late, and Villanova routinely gets good shots because of their patience and clarity in what they want.

Getting the Cougars to the second weekend this year may be the most impressive coaching job of Sampson’s career, given that they lost Tramon Mark and Marcus Sasser to injuries before conference play even began. Between them, they were averaging 27 points per game, and Houston hasn’t really replaced that scoring punch. Nevertheless, the Cougars kept winning because they are excellent defensively, relentless on the glass and totally comfortable playing the kind of ugly games that you often see in the tournament. This is very much a team that reflects the toughness Sampson demands in his program.

Though there are still some stubborn people out there who won’t let go of the “can’t win the big one” narrative, the reality is that Few has won a lot of big ones. You don’t get to two national title games or seven consecutive Sweet 16s without a lot of great tournament wins. And even when Gonzaga loses, you can’t really call them choke jobs. Their last six tournament losses were to Duke (eventual national champion), Syracuse, North Carolina (national champion), Florida State, Texas Tech (runner-up) and Baylor (national champion). A handful of teams might be able to out-athlete Gonzaga, but you never walk away thinking Few was outcoached.

Some folks get rubbed the wrong way by Musselman’s shirtless celebrations and other colorful antics, but there aren’t many coaches out there who can match him X for O. He runs great stuff out of timeouts, emphasizes getting to the foul line (Arkansas leads the nation with 808 free-throw attempts), having good floor balance and running at a high tempo without turning it over much. Musselman’s depth of experience in the NBA, where he was a head coach for 246 games, has translated very well to the college level, where he’s made the second weekend three times in just seven years as a head coach, including once at Nevada.

MORE: Looking at the NCAA Tournament’s biggest surprises so far

You have to give deference to Self’s overall track record as one of the greatest coaches of this era. But in the tournament, there have been a disproportionate number of questionable losses with supposedly superior teams (Bradley in 2006, Northern Iowa in 2010, VCU in 2011, Stanford in 2014, Wichita State in 2015, USC in 2021). Obviously, Self’s 2008 national title is a huge trump card, but you could easily argue that he should have more than three Final Four appearances, given the regular-season dominance and the level of talent he’s had on campus.

Last year’s run from the First Four to the Final Four was proof of concept for what a Cronin-coached team might look like with elite talent as opposed to the more hardscrabble rosters he put together at Cincinnati, where he reached the Sweet 16 just once in nine NCAA appearances. If you can meld the defensive toughness and precision Cronin demands with guys who are skilled enough to create their own shot, you’ve got a winning formula for the tournament.

Some fans may take offense to this ranking, given Krzyzewski’s unassailable accomplishments in the tournament over a very long period of time. But this particular ranking isn’t about program-building or what you’ve done in the past. And in the latter part of Krzyzewski’s career, there hasn’t been much of an identity other than “go get the best recruits and let them play.” Despite one top-ranked recruiting class after another, Duke has only been to the Final Four once in the past 10 tournaments.

Larrañaga is now responsible for three of Miami’s four Sweet 16 appearances, which is simply remarkable for a program that has been an afterthought for most of its history. Combine that with his Final Four run at George Mason, and there’s a strong argument for Larrañaga to one day make the Naismith Memorial Basketball Hall of Fame. If he does, his exhibit should just be the tape of last Sunday’s game, when they schematically, mentally and physically took apart the No. 2 seeded Auburn Tigers, 79-61. From the opening tip to the end, you won’t find a team in the tournament that was better prepared to play its opponent.

Perhaps the most underrated coach in the country, Painter’s consistency is rare these days for a non-blueblood program: 13 tournament appearances in 17 seasons with six trips to the Sweet 16 or beyond. In 2019, Painter came within a second of breaking through to the Final Four — until Mamadi Diakite’s unlikely buzzer-beater saved Virginia, which went on to win the national title. Purdue has a great chance this year, too, playing No. 15 seed Saint Peter’s with either North Carolina or UCLA looming after that. If there’s one knock on Painter, it’s defense: Purdue is currently 89th in KenPom efficiency and has only had a top-20 defense twice in the last 10 years.

Those who were calling for Howard to be fired after the unfortunate fracas against Wisconsin kind of missed the larger point here. In a very short period of time, he’s proven to be an excellent college coach who now has a 5-1 tournament record. Michigan was down 15 late in the first half in the first round against Colorado State before coming back to win, and then responded with a monster defensive game against Tennessee in the second round, holding the Vols to 42% shooting while only putting them on the foul line 12 times. You can’t do that in the tournament with bad coaching.

The sample size is very small here, but the first-year head coach and former Gonzaga assistant had some impressive moments in getting the Wildcats past TCU on Sunday. In particular, when Arizona was very much on the ropes, Lloyd dialed up a beautiful action out of a timeout to get Bennedict Mathurin a wide-open dunk on a backdoor cut. Mathurin also made the tying three at the end of regulation off a ball screen, which is exactly what you want as a coach: Giving your best player the opportunity to win the game. Simple in concept, hard to pull off.

Is this a prisoner-of-the-moment pick? Perhaps, but the way his team beat Kentucky was such a good reflection on his coaching ability and the confidence he imparts on his players. How many times have you seen a team of that ilk either completely wilt late against a big-name program, or make mistakes and barely hold on? Instead, Saint Peter’s went blow-for-blow with Kentucky the whole way and made all the big plays and free throws late to pull the upset. Then, Holloway was able to turn around and get his team ready to beat Murray State, which had lost just twice in the regular season. That’s a really impressive coaching feat.

The defining moment of the Red Raiders’ 59-53 round of 32 win over Notre Dame came after a timeout with 1:51 left and the Irish leading by a point. Adams, who built a long career as a defensive guru, came out in a zone that surprised and discombobulated Notre Dame, which turned it over after the trap came. It was the first of four consecutive stops to end the game, which sums up why it’s a little scary to go up against Texas Tech right now. It’s not always pretty to watch, but Adams is going to come up with a disruptive defensive scheme that will provide a stiff test for anyone in a one-game scenario.

It’s hard to get a read on Otzelberger as a head coach because he hasn’t stayed anywhere for very long. Three years (and two NCAA appearances) at South Dakota State, two mediocre seasons at UNLV and then a remarkable turnaround at Iowa State, which won just two games total last season. Given how limited the Cyclones are offensively — 158th in KenPom, with just one guy who can reliably score the ball in Izaiah Brockington — it’s a quite remarkable coaching job this year to get them here.

The computers do not like this Friars team. Despite a 27-5 record, Providence is just 33rd in KenPom but No. 1 in the “luck” factor — which means they’ve won a disproportionate share of coin-flip games. Is that really luck, great coaching or players having the clutch gene? Maybe all three. Either way, everything came together this year for Cooley, who was previously 1-5 in the NCAA Tournament. The Friars got a pretty favorable draw with South Dakota State and Richmond, but tip your cap to them for taking advantage of it.

In the overall picture, Davis should get a lot of credit for turning the Tar Heels around after a pretty underwhelming season that created a significant amount of angst within the fan base. After losing to woeful Pittsburgh at home on Feb. 16, North Carolina won its next six (including at Duke) to secure an NCAA bid and then played a terrific game in the first round to beat Marquette by 32 points. Though beating No. 1 seed Baylor in overtime to advance makes this season an unqualified success, it was not a coaching masterpiece as the Tar Heels blew a 25-point lead in regulation and seemed clueless in how to handle a full-court press.