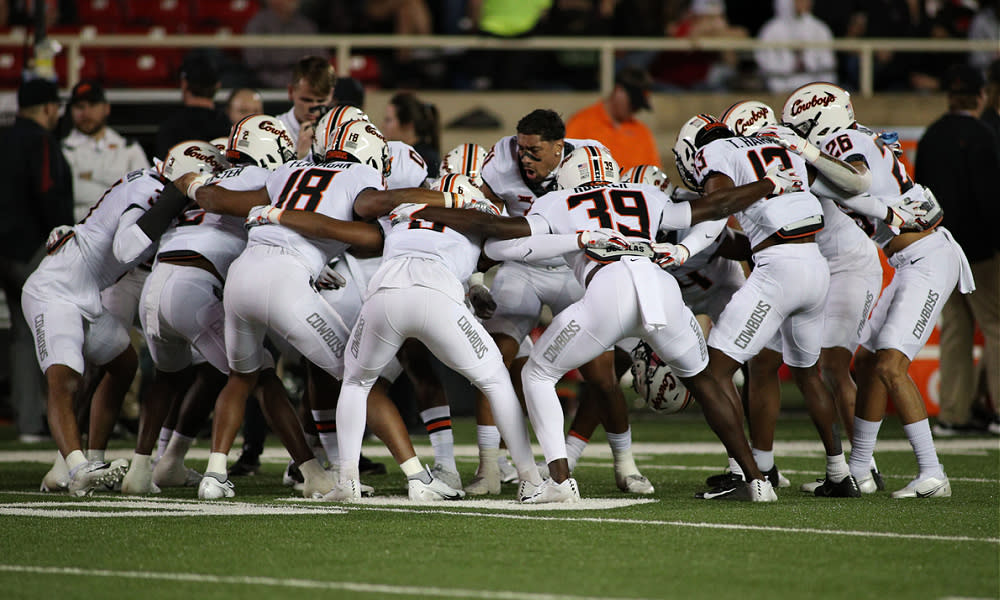 Who’s still alive in the chase to get into the 2021-2022 College Football Playoff? After Week 12, here are the 8 teams still alive and what they need to do to get in.

Unless everyone starts losing – like, if Georgia Tech beats Georgia, Auburn beats Alabama, and it gets even weirder from there – there are realistically eight teams left in the College Football Playoff chase.

Wake Forest tapped out, Michigan State was done 30 seconds after getting off the bus in Columbus, and Oregon ran into a Utah buzzsaw.

Those three won’t be joining us for the rest of the College Football Playoff season. Who’s left?

Here’s the ranking of the eight remaining teams based on 1) ease of path to get in, and most importantly, 2) the pecking order, starting with …

Did you win your Power Five conference championship, and did you go unbeaten or finish 12-1? The precedent has been set from the start that you’re in if you do that, and if there isn’t another obvious option.

2017 Ohio State remains the only 12-1 Power Five champ not to get in, and that’s because the committee invoked the Because It’s Alabama clause on an 11-1 team that lost to Auburn – and because Ohio State got obliterated by Purdue.

Oklahoma might not have the best resumé, but the loss to Baylor isn’t that bad. If it beats Oklahoma State twice, it’ll be one of – at most – three 12-1 Power Five conference champs.

Get to 12-1, and Oklahoma is likely in. Blowout Oklahoma State in the Big 12 Championship – and maybe in Stillwater this week – and it’s a done deal.

So why the lowest-ranked team on the list? The call is that OU doesn’t beat Oklahoma State twice, if it even gets the second chance. That, and the committee really might not like this Sooner team and the rankings aren’t just a mirage.

The College Football Playoff committee has been in a strange bind when it comes to Notre Dame.

It blew out Wisconsin, and the wins over Purdue, North Carolina, and Virginia – even though the Cavaliers were without QB Brennan Armstrong – are among the eight wins over Power Five programs, and there will certainly be a ninth at Stanford this weekend.

It’s been a bit of a stunner through the early process that the committee hasn’t put the Irish one spot behind Cincinnati and kept them behind Michigan and Michigan State – at least until this week. It’s as if they’re being punished for being the one good team on Cincinnati’s schedule, and losing.

Here’s the strange part, though. Notre Dame is blowing out teams like it wishes Cincinnati had done over the last several weeks.

That’s the three-game combined total against Navy, Virginia, and Georgia Tech, but there’s no getting into the College Football Playoff unless 1) Cincinnati loses to free the Irish to move up, and/or 2) there’s a two-loss Big 12 champion, and/or 3) the Big Ten West wins the Big Ten championship.

It was Senior Day, the team appeared to be fed up with getting dogged for mediocre performances against awful teams, and …

SMU isn’t all that good, either.

Don’t let the record fool you. Oh sure, there was a win at TCU, but it lost to Houston in a shootout, needed a thrilling game to get by an awful Louisiana Tech, and it lost to a mediocre Memphis.

But whatever, we asked for Cincinnati to start looking the part, and it sure did that in the 48-14 win on Saturday that wasn’t even that close.

There’s also the chance that the committee goes with 11-2 Alabama over a 13-0 Cincinnati, too.

Michigan is here over Cincinnati and Notre Dame because it controls its own destiny.

It needed Michigan State to be out of the way, and Ohio State more than took care of that.

Beat Ohio State, win the Big Ten Championship over Wisconsin or Iowa, and it’s – almost certainly – off to Arlington, Texas and the College Football Playoff in the Goodyear Cotton Bowl Classic.

It’s a sound team with the lines, the toughness, and the running game to do what Michigan State couldn’t – at least when it comes to not getting blown out – but …

You think Michigan is beating Ohio State? that’s why it’s No. 5.

The College Football Playoff committee appears to play a value on dominance. Oklahoma State’s defense is right there with Georgia and Wisconsin as one of the elite of the elite, allowing just 23 points total over the last four games and 24 points or fewer in every game so far.

It’s not like taking out Texas Tech was that big a deal, but it was coming off a 41-38 win over Iowa State, was the only team to beat Houston, and it was dangerous.

Oklahoma State’s defense all but pitched a perfect game in the 23-0 win that was even more dominant than the final score.

With the ten-point win over Baylor, and the road win over Boise State, and with the offense improving and the defense rocking and rolling, beating Oklahoma twice – or Baylor again in the Big 12 Championship – should be enough to get in over Cincinnati.

There was some question about the schedule.

Beating Minnesota wasn’t without its charm, but it lost to Oregon, and beat a whole slew of bad teams.

Yeah, it beat Penn State, but it wasn’t totally convincing, and the victory over Nebraska was too sluggish.

Ohio State 59-17 over Purdue, Ohio State 56-7 over Michigan State. Boom, boom. THAT’S what the committee is looking for out of a team in mid-November.

Now, there might be a scenario or three that Ohio State could lose and still get in, but it’s way too weird. Let’s save that unless we have to go there.

When it comes to who’s playing better at the immediate moment, Ohio State has it all over Alabama.

The Crimson Tide are are explosive and they’re getting the job done in the best conference in America, but they had a hard time putting Arkansas away, they needed to push to get past Florida and LSU teams that probably won’t go bowling, and there’s the loss to Texas A&M that kept the College Football Playoff spot from being a certainty.

There were also blowout wins over Ole Miss, Mississippi State, and Tennessee – even if that last one took a while.

The resumé is too good, and, of course, it could get in on the Because It’s Alabama clause.

And that’s why Bama is two and Ohio State three in this. Ohio State is almost certainly out with a second loss. There’s a school of thought by a whole lot of smart people who do this that Alabama could lose to Georgia and still get in at 11-2.

If it’s a blowout loss to the Bulldogs, forget it. But let’s say it’s close.

On the belief that the College Football Playoff is supposed to be about the four best teams, do you take a Crimson Tide team that played a schedule that Cincinnati would go 9-3 against at absolute best – throwing another loss on the fire if you include Georgia?

Let’s say it’s a tough 27-24 Georgia win over Bama that comes down to a walk-off field goal, and Cincinnati sputters and struggles against Houston.

If there are already three sure-thing options – like Georgia, one-loss Big Ten champion, and a one-loss Big 12 champion that rolled through its last two games – I think Cincinnati still gets in, but that’s a coin flip.

Or, Alabama could just beat Georgia.

Honest question – doesn’t it feel like you haven’t watched Georgia in months?

You didn’t watch the Charleston Southern game, and the SEC wins have become a blur since they were all but over at halftime.

All Georgia has to do is beat Georgia Tech this week. Do that, and as the only remaining unbeaten Power Five team, it’s in the College Football Playoff even if it gets obliterated by Alabama in the SEC Championship – think 2020 Notre Dame.

We’re not at a point that people are looking for things to pick on.

Stetson Bennett still holding down the quarterback job over NFL prospect JT Daniels is going to be an issue at some point, but that’s a high-rent district issue.

A few have even started criticizing the schedule – where’s the really good win?

The Dawgs will probably have wins over eight bowl teams – nine if you include Alabama – and not one has played a competitive game against them since the 10-7 opener against Clemson a million weeks ago.

Beat Georgia Tech, get into the College Football Playoff.