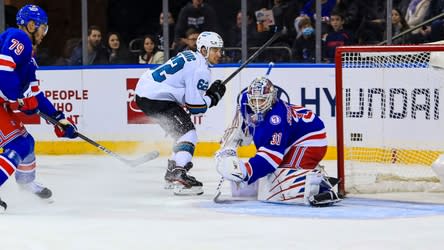 NEW YORK (AP) — Ryan Strome scored in the first period, and Igor Shesterkin and Alexandar Georgiev combined for a 28-save shutout as the New York Rangers beat the San Jose Sharks 1-0 Friday night for their fifth straight win.

Shesterkin had 19 saves before leaving at 5:08 of the third period after appearing to suffer a right leg injury stretching out face-down in the crease. The Russian goalie wasn’t putting any weight on the leg as he was helped off the ice by the Rangers’ trainer and banged the side of the runway in frustration as he departed down the tunnel.

Georgiev stopped all nine shots he faced to help the surging Rangers win their seventh straight at home and improve to 9-2-0 in their last 11 games overall.

Adin Hill had 25 saves while starting for the second straight night after beating the Islanders on Thursday as the Sharks snapped a three-game winning streak and lost for the second time in seven games.

San Jose had a power play midway through the third on a penalty to the Rangers’ K’Andre Miller. Georgiev denied Logan Couture from in close on the Sharks’ best chance.

Strome scored on the power play at 6:03 of the first period, getting his fourth of the season past Adin Hill.

Adam Fox, who won the Norris Trophy last season, had his 19th assist on the play, most in the league by a defenseman. His 23 points are tied with Florida’s Aaron Ekblad for most by a defenseman. Fox has points in 13 of the Rangers’ 15 wins and they are 13-1-3 in games Fox has a point.

The Sharks were coming off 2-1 overtime win over the Islanders on Thursday night at UBS Arena after defeating the Devils 5-2 on Tuesday and the Blackhawks 2-0 in Chicago last Sunday.

Hill made a solid save on Mika Zibanejad’s tip-in try during the Rangers’ second power play midway through the second, and he denied Artemi Panarin with a right pad save from in close eight minutes into the third.

The Rangers have won six games in a row against San Jose, dating back to Jan. 25, 2018, and have points in nine of their last 11 games against the Sharks with an 8-2-1 mark. At Madison Square Garden, the Rangers have won three straight meetings and six of the last seven.

The Rangers have power-play goals in four of their last five games and are 9-1-2 in contests in which they have scored with the man-advantage. When outscoring an opponent on special teams this season, New York is 7-0-1.

Sharks: At Columbus on Sunday to complete their third five-game trip of the season.