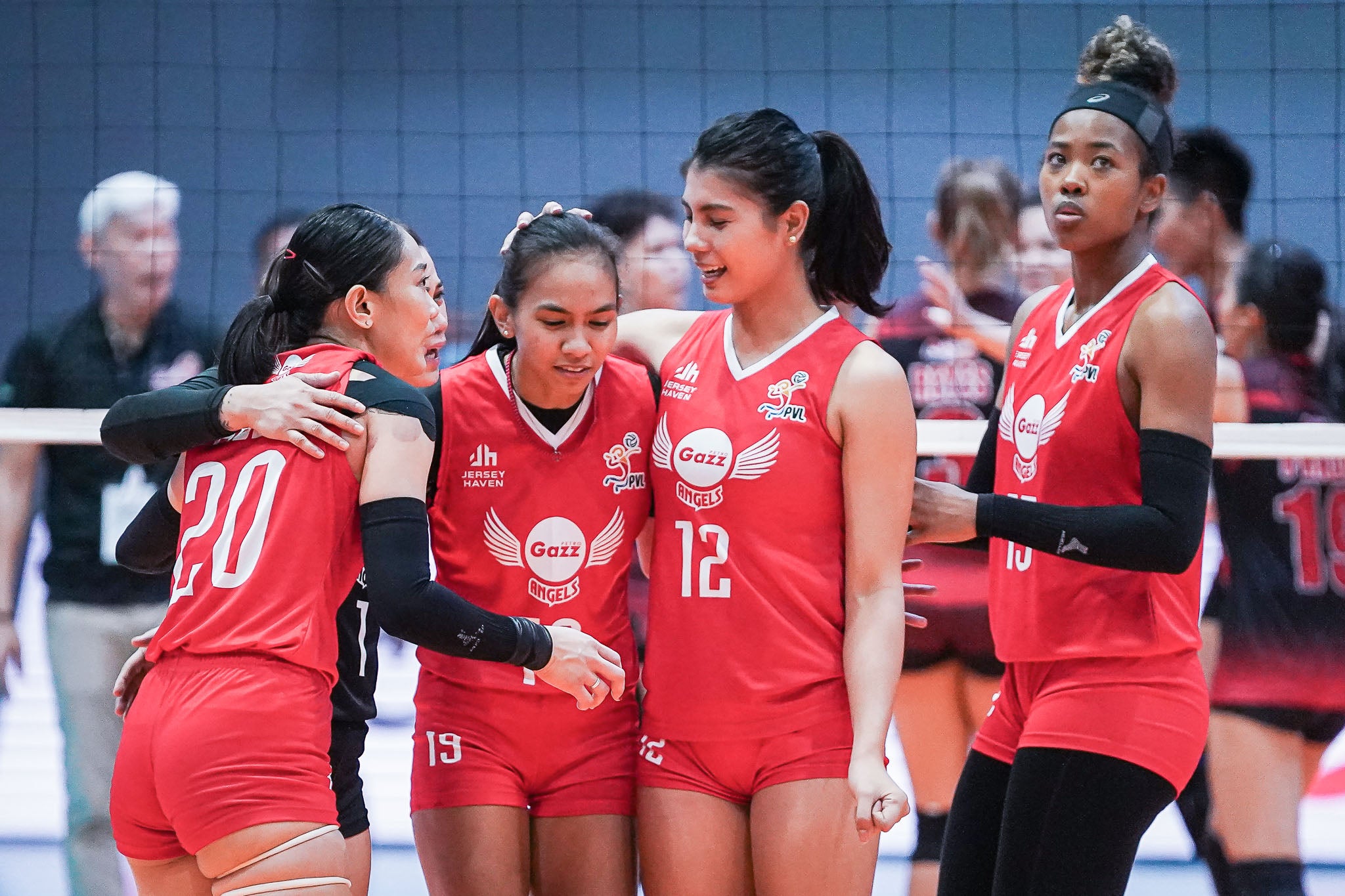 Petro Gazz Angels during their game against PLDT High Speed Hitters in the 2022 PVL Open Conference. Photo from PVL

MANILA, Philippines—Petro Gazz took a step closer to sweeping the Group B eliminations, holding sway in the third set then pouncing on PLDT’s meltdown in the next for a 25-22, 19-25, 25-22, 25-18 win Monday in the Premier Volleyball League Open Conference at the Paco Arena in Manila.

The Angels also came out a bit better than the High Speed Hitters in an error-filled, one-hour, 58-minute duel, finishing with just two slips less than their rivals after they combined for 70 miscues.

“It was an ugly win,” rued Petro Gazz coach Jerry Yee. “But it’s nice to win in that fashion.”

JIa Morado-De Guzman, right, and Jema Galanza react during a game against BaliPure in the 2022 PVL Open Conference. Photo from PVL

Ace playmaker Jia Morado-De Guzman produced a 14-excellent set performance to anchor the Cool Smashers’ romp and clinch the best player of the game honors. But the rest of the star-studded roster put in their share to remain the only squad in the nine-team field that has yet to drop a set.

Both teams have assured themselves of twice-to-beat edges in the knockout stage.

Petro Gazz and PLDT actually fought it out in spurts and close all throughout with the Angels scoring 44 attack points, just one better than the High Speed Hitters. The Angels also produced seven blocks and aces against their rivals’ five in both departments.

But the Angels proved steadier in the last two frames, squeezing out a tough win in the third frame and then breaking away from a 15-13 count in the fourth behind a closing 10-5 binge aided by the High Speed Hitters’ miscues.

Nicole Tiamzon led the Angels’ assault with 13 points, including 12 on attacks, MJ Phillips unloaded eight spikes and finished with 11 points while Jonah Sabete backed them up with 10 points, including three aces.

Joy Soyud tried to single-handedly rally PLDT late in the fourth with a cluster of points but the Angels just had answers for every charge with Aiza Pontillas foiling Toni Basas’ attack to wrap up the contest.

Bracing for a fierce fightback from the High Speed Hitters in the fourth, the Angels virtually glided to victory instead as they parlayed their rivals’ errors while drawing key hits from Phillips and Tiamzon and superb floor defense from the rest.

The Angels shoot for the sweep against the Creamline Cool Smashers on Wednesday.

Meanwhile, Choco Mucho and Cignal HD clash Tuesday in a duel of unbeaten teams, disputing the top spot in Group A – and the twice-to-beat edge in the quarterfinals.

Both teams will be coming into their 3 p.m. match brimming with confidence following back-to-back wins although the fired-up HD Spikers appeared to have posted a more impressive start – upending the fancied Chery Tiggo Crossovers and the F2 Logistics Cargo Movers.