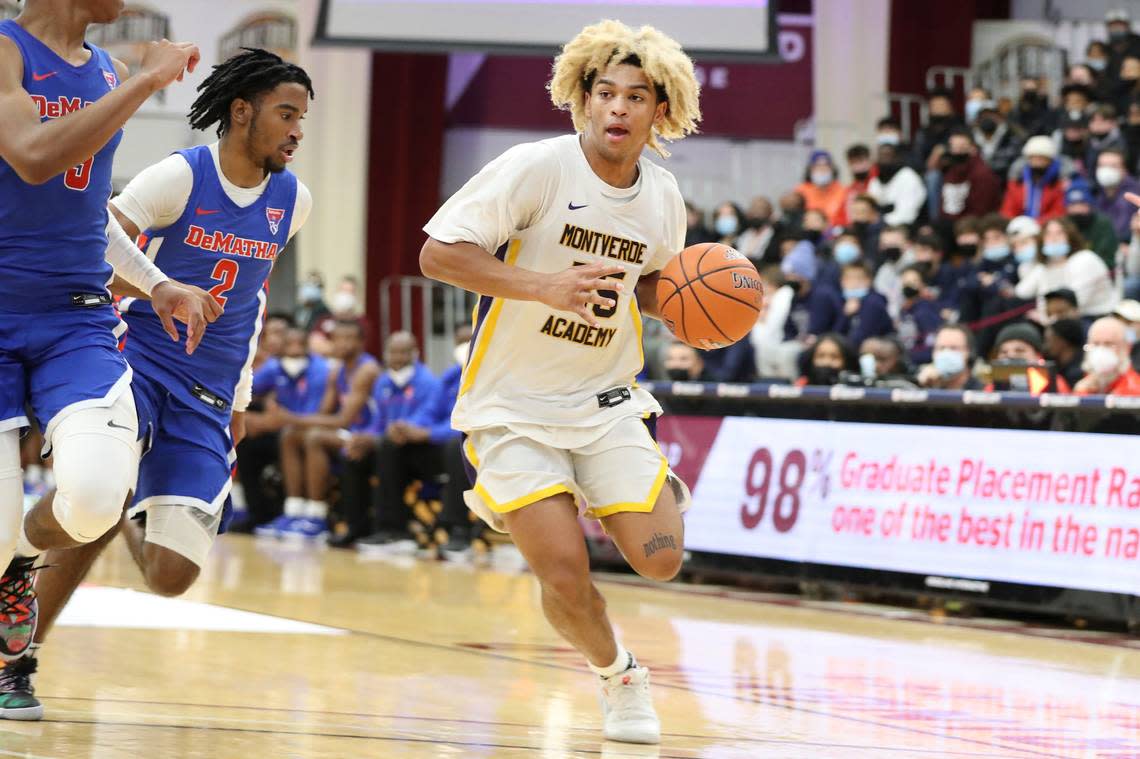 Clark — a 6-foot-3 point guard from Los Angeles — became UK’s first commitment from the class of 2022 back in the fall of 2020 and officially signed with the Cats last November, but he has now backed out of that commitment and requested a release from his national letter of intent.

He is the No. 27 overall player in the 2022 class, according to the 247Sports composite rankings.

Clark was a standout in the Los Angeles area early in his high school career and solidified his status as one of the best perimeter scorers in the country during his junior season in the Nashville area. Clark transferred to prep powerhouse Montverde Academy (Fla.) for his senior year, but a torn ACL suffered last summer derailed his final season of high school ball. Clark made a relatively quick recovery from that injury and returned to the court in January.

Kentucky now has just two incoming high school recruits for the 2022-23 season: five-star combo guard Cason Wallace and five-star wing Chris Livingston, who have both signed with the school.

The Wildcats’ 2022 class also previously included No. 1 overall recruit Shaedon Sharpe, but he enrolled at UK for the spring semester and was transferred to the 2021 class as a result of that move. Sharpe will be eligible for this year’s NBA Draft, and his status for the next college basketball season is still undetermined.

UK started recruiting Clark before his sophomore season. He visited Lexington toward the end of the 2019-20 season and was the first high school player to earn a scholarship offer from Coach John Calipari during the recruiting shutdown that resulted from the COVID-19 pandemic. Clark ultimately committed to the Cats on Oct. 22, 2020.

Clark’s lead recruiter, Joel Justus, departed the program for Arizona State after the 2020-21 season, raising questions about whether he would keep his commitment. Clark and his father later said they had developed a close bond with the new members of the UK coaching staff, and he seemed all-in on a college basketball future in Lexington.

“We love those dudes,” Kenny Clark, the player’s father, told the Herald-Leader last May. “They’ve showed us nothing but love. It just makes it feel right. Those dudes are definitely making him feel like a priority. Even though they’re new — and we had built a relationship with Coach Justus — we’re locked in with the University of Kentucky. That’s not changing.”

“First and foremost I would like to thank Coach Cal, the entire coaching staff at UK, as well as BBN for all the love and support you all have shown me over the past two years,” Clark said. “It honestly means the world to me. And that is what has made this decision such a tough one for me. But after a lot of thought and reflection, I have decided to ask for my release from the University of Kentucky so I may reopen my recruitment.”

This marks the second consecutive year that a Kentucky signee has backed out of a commitment to the Cats and asked for a release from his national letter of intent.

Point guard Nolan Hickman did the same last year, ultimately signing with Gonzaga. Before that, no recruit in the Calipari era had ever officially signed with the program and then decommitted. DJ Jeffries was committed (but not signed) when he reversed course and committed to Memphis in 2018.

Clark was not necessarily projected to be a starter on UK’s team for the 2022-23 season.

Wallace has developed into arguably the best guard in the 2022 class, and he’s likely to have a major impact on the Wildcats next season. He has experience on and off the ball — so he could play considerable minutes at the point guard spot — and will bring the reputation as one of the nation’s best perimeter defenders.

There’s also a chance that the starting point guard on the current team, Sahvir Wheeler, could return for his senior season. Wheeler is one of five finalists for the Bob Cousy Award, which honors the nation’s top point guard, and he’s leading the Southeastern Conference in assists per game for the second consecutive season.

If Wheeler opts to begin a professional career after this season, Kentucky was expected to look for an experienced point guard in the NCAA transfer portal, even if Clark had remained committed to the program. With Kellan Grady and Davion Mintz out of eligibility after this season, TyTy Washington projected to go to the NBA Draft, Sharpe’s future up in the air, and Clark no longer committed, the Cats will almost certainly look for more backcourt help this offseason.

Clark said Sunday that he would take the next few weeks to “regroup” and figure out the best next step for his basketball career. North Carolina was seen as a potential favorite before Clark committed to Kentucky in 2020, though several suitors — both college and pro — are likely to inquire about his recruitment.