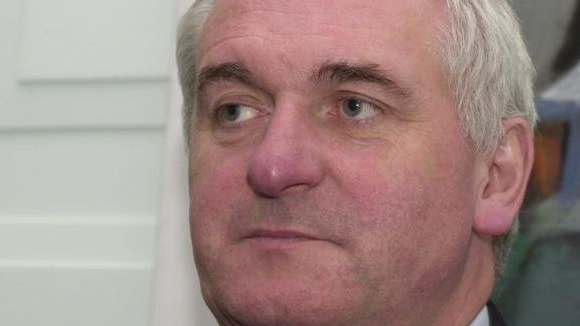 Former taoiseach Bertie Ahern has defended his use of the word ‘ghettos’ when referring to loyalist areas in Belfast and said people should “not get themselves in a knot” over it.

He said that areas of the constituency he had represented in Dublin had previously been referred to as ghettos and he saw this only as a suggesting a locality suffering from deprivation. He also maintained that he had sought to express understanding for the concerns of loyalists.

Mr Ahern had told a Brexit conference in Dublin on Thursday that loyalists in east Belfast and “ghettos” in Northern Ireland “haven’t a clue” about the post-Brexit protocol, and see it as a “trick by the South” to create a united Ireland.

However his reference to ‘ghettos’ prompted an angry response from unionist politicians.

She tweeted on Friday that the former taoiseach needed “to reflect on his words and apologise. Calling areas in Belfast ‘ghettos’ is not a good look.”

The East Belfast MP Gavin Robinson also strongly criticised the remarks saying it was “demeaning and degrading” for Mr Ahern to describe east Belfast as a ghetto and suggest loyalists were not able to understand the protocol.

However, in separate interviews on Friday, Mr Ahern defended his use of the word ‘ghettos’ as a way of referring to deprived areas.

Speaking on RTÉ, he said that when the discussion at the Brexit conference focused on technical issues involving medicines and meat, he intervened to make a short point.

“The point I intervened in – for a minute and a half – was the issue that loyalists feel, that all this technicality goes over their head, they’ve more to be doing than reading all the details.

“A lot of them wouldn’t understand it, most people don’t and their feeling is there’s another issue about this; it is an effort to pull away their identity, it was an effort to switch the border from across the land of Ireland to the sea border and that it’s an effort to push them into a united Ireland.”

“There are many areas in my own constituency (of Dublin Central) in the past which were described as ghettos or rough areas. Thankfully, we’ve moved away from that so I don’t think people should get themselves in a knot.”

When asked if he was sorry he had used the word ghettos, he said: “It’s not just about being careful of language, it’s about understanding what these people are saying. That’s the point I made yesterday.”