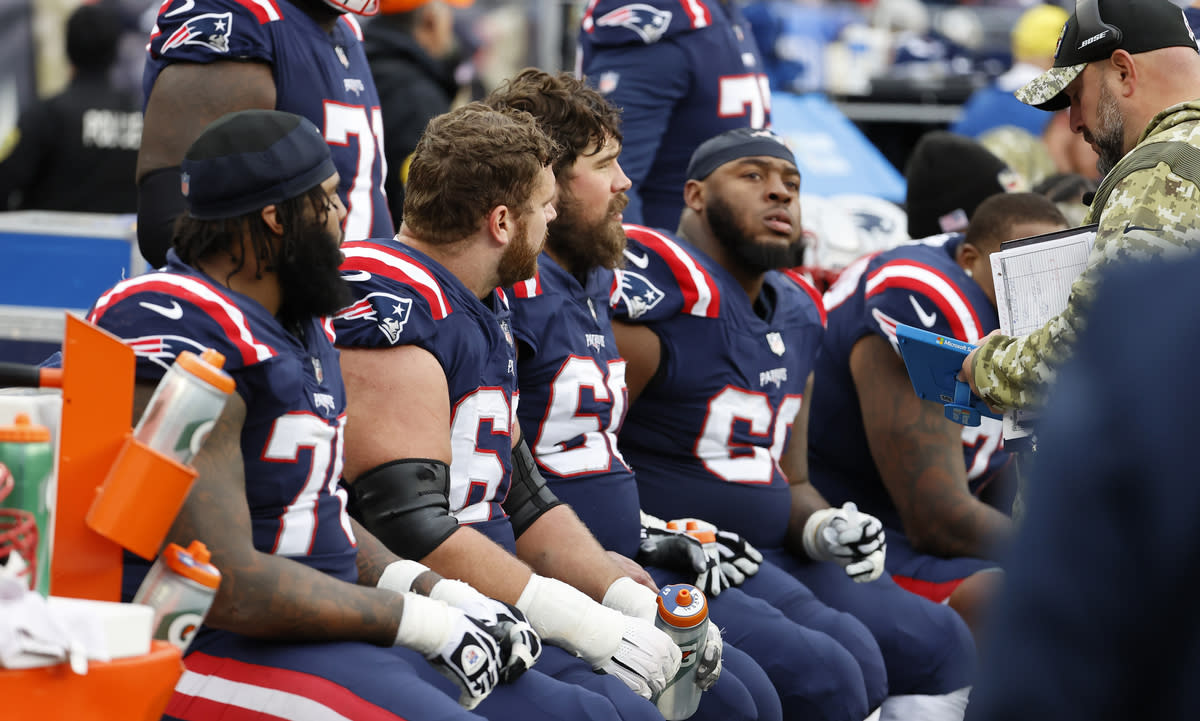 The brutality of professional football is such that there’s not a lot of room for game-day pity.

Yet that’s exactly what Hunter Henry has felt for opponents when his two biggest teammates have gone shoulder-to-shoulder along the offensive line.

Next Pats Podcast: Why Mac Jones is good enough to win the AFC East… and maybe more | Listen & Follow | Watch on YouTube

Even for NFL defenders, some of the planet’s largest and most aggressive individuals, it’s a look that might be a bit overwhelming: Mike Onwenu (350 pounds) aligned as a tight end next to right tackle Trent Brown (380 pounds) and right guard Shaq Mason (310 pounds), who is annually considered among the best run-blockers at his position.

Together, they are a half-ton of humanity, sent on a mission by Bill Belichick to obliterate that which lays in their path.

“It’s kinda fun to see,” Henry said. “When [Onwenu] lines up next to Trent, it’s something to see. For sure. With Shaq, Trent and Mike? My goodness… I feel bad for the guys on the other side.”

Add 255-pound fullback Jakob Johnson and any of New England’s three hard-charging running backs (228-pound Rhamondre Stevenson, 220-pound Brandon Bolden or 213-pound Damien Harris) into the mix for good measure, and you have the embodiment of the identity Belichick’s team has embraced during its five-game winning streak.

“Big, physical guys,” Belichick said of that particular offensive formation. “Without a doubt.”

There is no doubt those are the characteristics Belichick hopes his team will possess on an annual basis. Knowing the Patriots will be playing their most important games of the year in December and January, often outdoors, often in the Northeast, Belichick understands as chief team-builder that his group has to have an all-weather feel.

“If you play in New England,” Devin McCourty said, “you are built to play in bad weather because we don’t use our indoor (facility). At. All.”

But it goes beyond practice habits. The players who’ve taken up residence in the Patriots locker room are a collection of large human beings with a certain disposition. With years of evidence to suggest that the passing game is what determines Super Bowl winners, with passing-game numbers trending upward on an annual basis, when team-building practices focus on acquiring as much speed as possible, the Patriots are fine with being more plodding up and down the field. As long as it means their footprints can be found on opposing jerseys in the process.

“They don’t want to play our kind of game,” center David Andrews told his fellow linemen before the Patriots ran for 184 yards in a win over Cleveland, 45-7. “It ain’t pretty. It ain’t flashy. But it’s grown-man football.”

The Greatest Show on Turf they are not, nor is that what they try to be. Clearly.

Notice the two adjectives leading the bold-type credo found at the bottom of Patriots scouting cheat sheets that make the rounds leading up to the draft: “We are building a big, strong, fast, smart, tough and disciplined football team that consistently competes for championships.”

Just look at the current iteration of Belichick’s offensive line.

Of the league’s 32 clubs, no one has a heavier top-six along its line than the Patriots with Brown, Onwenu, Mason, Andrews (300 pounds), left guard Ted Karras (305) and left tackle Isaiah Wynn (310).

Next among the league leaders in offensive line mass are the Jets (1,952 pounds, including injured tackle Mekhi Becton) and Seahawks (1,936 pounds). Most teams check in under 1,900 pounds along the line, perhaps thanks in part to the Shanahan coaching tree that now has branches that extend across the league. Those branches typically feature running games that require offensive linemen who can move.

The Patriots have long wanted blockers who are “athletic enough,” as longtime line coach Dante Scarnecchia used to say. But they aren’t tied to a wide-zone running attack that gets linemen on the run. They can call for wide zone if needed. They’ll call for inside zone, too. They’ll run “power” with pulling guards, fullback isolation plays, “wham” plays with tight ends on the move horizontally, and “duo” runs featuring jarring double-teams at the line of scrimmage.

That varied rushing attack, helped by some serious heft along the line, has paid dividends.

The Patriots have rushed for 120 yards or more in seven straight games, which is a franchise record, and they seem hell-bent on adding to that total with each passing week. According to Pat Thorman of EstablishTheRun.com, since Week 5, they have the lowest situation-neutral (when the score is within seven points during the first three quarters, excluding the final two minutes of the first half) passing rate in the NFL. In other words, since Mac Jones was sacked four times against the Bucs, no one has been more committed to the run than the Patriots.

Believe it or not, through the first four games of the season, the Patriots were second in the league in situation-neutral passing rate, per Thorman. It’s been a violent swing from one play style to another. But in the process of going from pass-happy to run-heavy, Belichick and offensive coordinator Josh McDaniels have flipped on their heads the preconceived notions about what makes an offense “explosive.”

During their winning streak, the Patriots lead the league in expected points added per play, and their work on the ground (third in EPA per rush) has contributed to a passing game that has excelled (first in EPA per dropback) thanks in part to a heavy dose of play-action.

Rookie quarterback Mac Jones uses play-action at the seventh-highest rate in football over the last five weeks, he has the fourth-highest total yards passing when using play-action in that time, and his 10.0 yards per play-action attempt is 10th in the league.

Of course Jones, the best rookie quarterback to this point in the season, has been a driving factor in the team’s success. So, too, have Henry’s sure hands in the red zone and the emergence of receiver Kendrick Bourne — both free-agent additions in the offseason.

But the Patriots are currently sixth in the NFL in points per game (27.3) and they don’t get there, in all likelihood, without drafting a 350-pound offensive lineman in 2020 whose highlights at Michigan were plays in which he could hear the air being pressed out of defenders’ lungs.

They don’t get there without bringing back the biggest tackle in the league in the offseason, or without re-signing a hard-nosed veteran whose play at left guard has bumped the promising Onwenu to the top backup role.

They don’t get there without drafting a do-it-all runner back in May, who drew comparisons to LeGarrette Blount because of his playing style… and because, at the time, he tipped the scales at around 250 pounds.

With how they’ve built the roster, how they’ve practiced, and how they’ve called plays, the Patriots have been intentional in their pursuit of toughness. Now, with six weeks left in the regular season, they know who they are — and so do their opponents.

From the linemen to the receivers, they are physicality personified.

“I mean, they’re running the football over the last five weeks better than anybody else in the league,” Titans coach Mike Vrabel said. “Or as good as anybody else. Receivers are probably the best blocking wide receivers in the league. When your leading receiver is your best blocker, that makes for a good combination.”

As for that personnel package that features two block-out-the-sun offensive linemen side-by-side?

“You better get your pads down,” Vrabel said.

Brown and Mason alone have been a force since Brown returned from a calf injury that kept him out for almost nine full weeks. According to Pro Football Focus, the Patriots picked up 104 of their 134 yards rushing against the Falcons running to the right behind that pair. But adding Onwenu to the mix gives that side of the line even more beef.

The Patriots have had Brown on the field with Onwenu as a sixth lineman, along with Johnson at fullback, together for just five plays this season. But they’ve averaged 10.0 yards per play with that grouping and picked up three first downs.

It may not be a go-to formation for them. But as the weather gets colder, and with the Patriots playing four of their final six games at Gillette Stadium or in western New York, maybe it becomes more of a staple.

Either way, it’s as good a representation as any of the team’s recent offensive approach.

Curran: Pats just might be safest bet in unpredictable AFC

“It’s a unique weapon,” McCourty said. “Not only are those guys big. But you watch how they play, it’s kind of that road-grater (attitude). It’s not just, ‘Let’s just double-team a guy.’ It’s, ‘Let’s see how far we can take him.’ I know Mike’s quiet, but you talk to Trent, that’s what Trent’s trying to do. He’s trying to have one of those highlight-reel blocks where he gets you and he drives you as far as he possibly can.

“It’s cool and unique to see. We have two guys who are not normal-sized… That’s been a lot of fun for me, from the defensive side, to watch our offense. At different times, we see that and say, ‘What would we do with that? How would we want to play that?'”

Based on how things have gone for the Patriots offense of late, it seems as though the short answer would be easy: You wouldn’t.