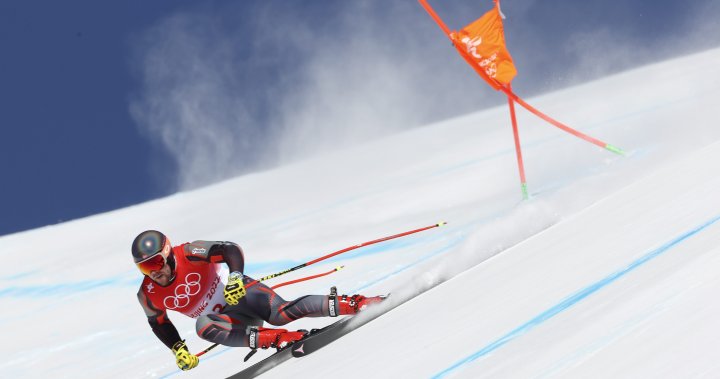 Switzerland’s Marco Odermatt and other skiers hit out at Olympic ski organisers after Saturday’s downhill training was cancelled with just three runners having completed the course.

High winds led organisers to pull the plug on the third training run for Sunday’s opening medal event with Austria’s Matthias Mayer, Italian Christof Innerhofer and favourite Aleksander Aamodt Kilde of Norway the only racers able to get on the track.

“Due to the present situation with high winds and no window in the forecast for decreasing winds, in the best interest of safety, the jury together with the organiser have decided to cancel today’s run,” the International Ski Federation (FIS) said in a statement.

But Odermatt, the overall World Cup leader and a contender in the downhill, was upset with the way the situation had been handled.

“It’s just not fair and for me the big, big issue is how they (the race Jury) communicate to us athletes,” he said.

“They just make a decision at 11:15, something like that, cancelling the training, even if the last two days we started one hour later.

“They don’t even ask what we think. After two or three sentences we spoke with FIS, the jury, they turned off the radio and didn’t answer any more,” he added.

Odermatt said there would be a slight advantage for the trio who were able to get in a third run on the unfamiliar course which has never been competed on before.

“If it’s in Wengen or Kitzbuehel everybody knows the slope but here everything is new, everything is different,” said the Swiss. “So, every run really helps you to find the perfect set up or line.

“Hopefully tomorrow the wind will calm down and we can have a fair race.”

The blustery conditions in the upper stages of the course clearly impacted the trio who did get to train, and Kilde felt organisers had made the right call.

“It was fun to ski but with the wind it’s kind of crazy because you gain so much speed some places and then you suddenly lose speed and on the jumps I went 60 metres I think — I was in balance, thank God.

“It’s good that they cancelled. It is coming from every direction so it’s really hard to control it.

“Then suddenly it’s nothing and then you have full wind then nothing again — then from the side, from the back and also on the jumps today it’s coming from under.”

But Austria’s Daniel Hemetsberger said the skiers should have been given the chance to take the wind into account.

“I’m a bit angry because I wanted to go, I wanted to ski,” he added. “The wind was really heavy in the middle part, but I think we had the opportunity to slow down there.

“We are all grown-up athletes, we are all professionals, we could do this.”

Germany coach Christian Schwaiger said it was the right move to stop the run but was puzzled why organisers did not wait.

“None of us understand why they’ve cancelled it so quickly. It was correct to break it off, it was at the limit, it wasn’t safe,” he said.

“But we could have waited another half an hour or an hour. We all have time. This training run would naturally have been extremely important for many nations.”

2:20
Beijing Winter Olympics set to kick off despite COVID-19 and controversies

Race referee Markus Waldner said that the cancellation decision was based purely on safety.

“Of course I can accept all this criticism coming from the racers, some coaches, that this is an advantage for three racers now,” he said.

“But this is ‘force majeure’. We’re an outdoor sport and we make always decisions in terms of safety. Due to safety we made this decision, very simple.”

High winds are forecast again for race day but Waldner said they expected the gusts to drop around race time.

Sunday’s scheduled downhill opens the alpine skiing events at the Yanqing complex with the women in action on Monday in the giant slalom.