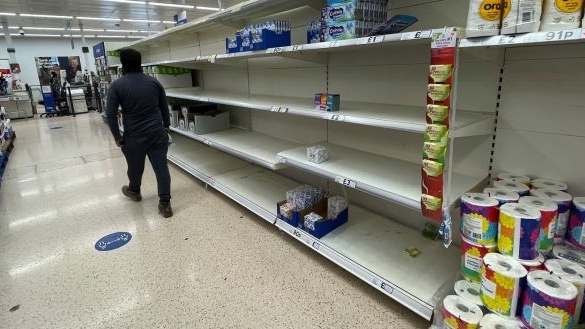 The Russian invasion of Ukraine is not expected to result in food shortages in Ireland in the coming months but the Government is anticipating price increases.

Tánaiste Leo Varadkar said it probably will be the case that there might be higher food prices and some products may not be available but shortages are “not modelled, predicted or expected”.

He also said the Government is not expecting fuel shortages and but that further action to help people with the high cost of energy would have to be at a European level.

It comes as inflation in the Irish economy is expected to surge to 8.5 per cent or even higher in the coming months.

Mr Varadkar was asked what he could say to allay fears about the cost of living.

He said: “There can be no doubt that inflation and the cost of living crisis is really affecting people, whether it’s households or businesses, particularly those on low income struggling to make ends meet.”

He pointed to €1 billion set aside by Government to help with the cost of living including the increase in the fuel allowance, €200 deduction from the electricity bills and cut in excise on petrol and diesel.

Mr Varadkar said: “These are very significant interventions but the truth is, all we can do as a government is ease the pain and mitigate the effect of rising prices. “The underlying factors that are driving it unfortunately are international and are largely beyond our control.”

There have been calls from the Opposition and lobby groups for a cut in the VAT rate on fuel, a move the Government has resisted out of concern at losing a derogation for the current Irish rate from the EU.

Asked if a VAT cut could happen Mr Varadkar said: “I think any further actions like reduction in VAT would have to be something that we do on a European level.

“We’ve already reduced excise considerably and I think that has helped to mitigate the increase in the price of petrol, the price of diesel.”

On whether he expects the issue to come up at this week’s European Council meeting he said there will certainly be discussion about further action that the European Union could take to reduce the cost of energy and fuel and electricity in particular.

The Fine Gael leader was speaking at the launch of a planned new Royal College of Surgeons in Ireland (RCSI) Education and Research Centre on the campus of Connolly Hospital in his Dublin West constituency.