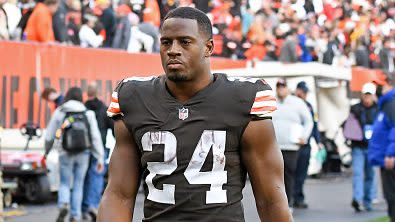 When the Browns put running backs Nick Chubb and Demetric Felton on the COVID-19 reserve list earlier this week, there was some hope that they would be cleared in time to face the Patriots.

That hope has run out. Browns head coach Kevin Stefanski said on Friday that neither Chubb nor Felton will be available for the game.

John Kelly went on the COVID list before those backs and is also out, which leaves D’Ernest Johnson as the only running back on the active roster. Brian Hill and Dexter Williams are on the practice squad.

In better news for the Browns, defensive end Myles Garrett returned to practice after missing two days with a foot injury. He’s set to play against New England, but defensive end Takk McKinley (groin) has been ruled out and cornerback Greedy Williams (shoulder) is listed as questionable.