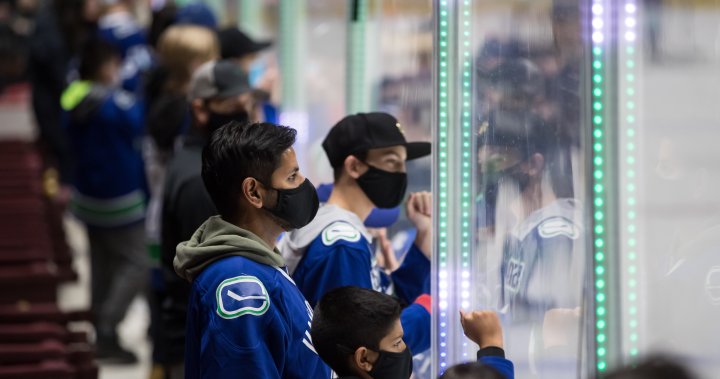 The NHL has postponed the Vancouver Canucks home games scheduled for Saturday and Sunday at Rogers Arena, as the province grapples with the spread of the highly contagious COVID-19 Omicron variant.

The Canucks were set to host the Toronto Maple Leafs on Saturday at 4 p.m., then the Arizona Coyotes on Sunday, at 7 p.m., in front of full-capacity crowds.

The Canucks said the NHL made the decision due to the high number of players entering the COVID protocol, in consultation with the NHLPA and clubs’ medical groups.

“The League is in the process of reviewing and revising its regular season schedule,” the Canucks said in a statement.

“Tickets for the Canucks games this weekend will be valid for the rescheduled dates. Ticket holders are asked to hold onto their tickets and the Canucks will provide more information as soon as it is available.”

The move came ahead of a looming 50 per cent capacity restriction for venues seating more than 1,000 people.

The restriction, set to take effect Monday, was implemented by provincial health officials in a bid to curb surging COVID-19 case numbers.

Due to the continuing onset of the Omicron virus, the Provincial Government has limited attendance of all events & cancelled New Year’s Eve events, which means that the New Year’s Eve concert starring Bryan Adams is cancelled. All tickets will be refunded at point of purchase. pic.twitter.com/vJOhVCq1a5

On Friday, Bryan Adams announced that his New Year’s Eve concert, scheduled to take place at Rogers Arena, had also been cancelled.

Jeff Guignard, executive director of the Alliance of Beverage Licensees of B.C., said the new restrictions would be tough on the hospitality industry, but “we know we have to do it.”

“It’s difficult and its putting a lot of stress on our industry,” he said.

“The good news is we’ve got some notice, it’s a couple weeks before New Year’s Eve, whereas last year we found out 30 hours before, so I appreciate Dr. Henry gave us a heads up.”

Under the restrictions, formal events have been cancelled, but people will still be able to go out to restaurants — provided they remain seated at a table and do not dance or mingle.

Guignard said restaurants and pubs are now scrambling to find ways to make sure guests could still enjoy a night out safely.

“Give us some time to plan and find an alternative for you that’s congruent with these laws that will make you have a fun night.”