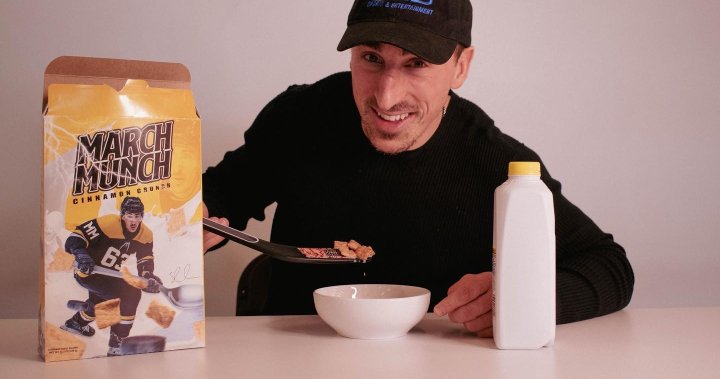 Looking to start your morning off with a hockey star, and a touch of cinnamon?

Boston Bruins all-star winger Brad Marchand, who is from Hammonds Plains, N.S., has partnered with PLB Sports & Entertainment to launch his very own limited edition cereal.

Marchand tweeted out a few marketing photos Wednesday afternoon, calling it a “dream come true” to be featured on a box.

I can not be more excited to announce the launch of March Munch cereal. Cinnamon Toast Crunch has never looked so good! This is a dream come true, growing up I never could have imagined this being a possibility! Available at Shaw’s, Star Market and Market Basket. pic.twitter.com/gqL1EgB1i5

The breakfast staple, dubbed March Munch Cinnamon Crunch, sells for $29.99 US for a two-pack on the company’s website. It will also be available at three American grocery stores: Shaw’s, Star Markets and Market Basket.

According to PLB Sports & Entertainment, a portion of the proceeds from every box sold will support Christopher’s Haven, an organization that supports families of children being treated for cancer.

There was quite a bit of chirping on social media in response to Marchand’s announcement, including a few that referenced Marchand’s past penchant for … licking.

Do you lick the box before or after you eat the cereal?

Marchand is the latest Nova Scotian NHLer to grace the front of a cereal box.