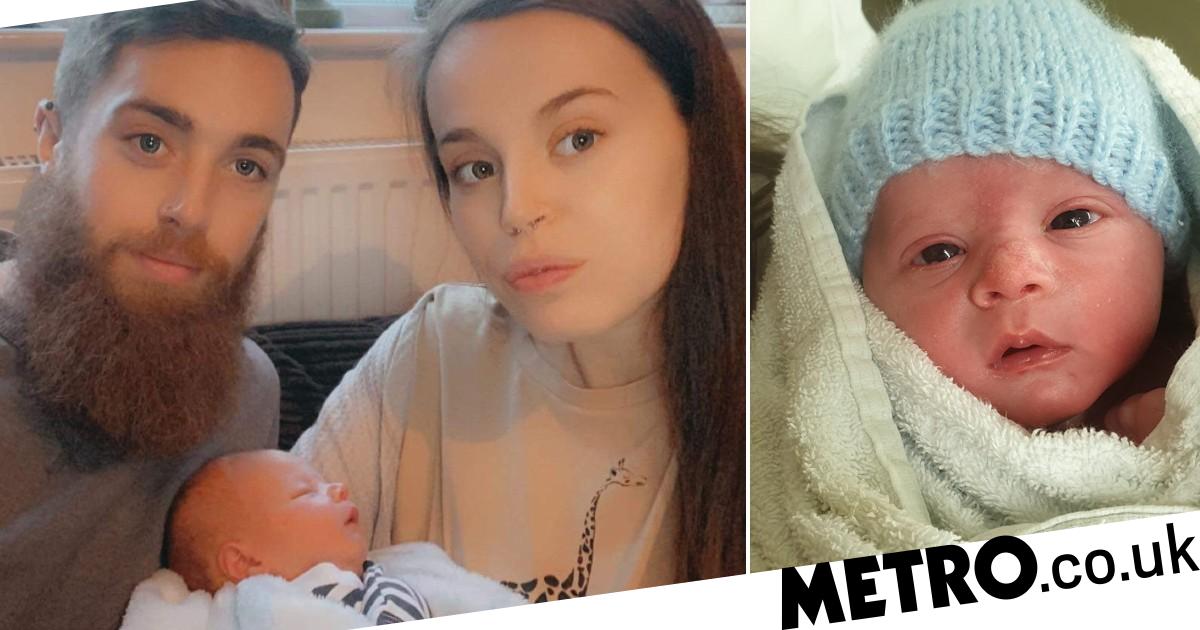 A mum and dad were forced to bring their baby into the world all by themselves
after the birth progressed incredibly quickly.

Mum, Jade Poutney, 24, and dad, Sam Castledine, 25, had to deliver their own child when they realised there wasn’t enough time to get back to the hospital – after they had been sent home to wait.

Immediately after giving birth, Sam had to run for help, flagging down a police car and asking the officer for assistance.

The drama started when Jade woke Sam up in the early hours a few days after Christmas at their flat in Kibworth, Lancashire, saying she had some back pain, and thought it might have been early contractions.

She left Sam to sleep and headed into the living room, waking him up three hours later saying the pain was worsening.

‘At first we thought it was in its very early stages, but at 6am the pain worsened so we went to the hospital for a check-up, but we were sent home and told to come back when the contractions were closer together,’ says Sam.

‘So when we got back to the flat, she went into the bedroom to relax and get some rest and I went to the living room and watched Lord of the Rings while waiting.

‘But then I received a text from her saying she needed me. I walked into the bedroom and found she was in the en-suite and her waters had broken.’

The pair quickly started getting their things together to head back to the hospital, but then more of Jade’s waters broke just as she was about to get in the car.

‘I think Jade knew she wasn’t going to make it to the hospital, so we went back inside and got her on the bed,’ says Sam.

‘She then told me that she could feel something between her legs, so I had a look.’

When Sam checked, he saw that his son’s head and shoulders were already out.

‘It was certainly strange to see that his head was already out and his eyes were starting to open. I don’t think I will get that image out of my head for a very long time.

‘I just told her what the situation was and that we had to give birth now, and that she should start to push because I would deliver the baby.’

When baby Freddie was fully delivered, Sam gave the newborn to Jade and was
about to head to his mum’s for help, as she just lives down the road from the couple. But Jade noticed something was wrong with Freddie.

‘I was just about to head out when Jade noticed that the umbilical cord was wrapped around Freddie’s neck and back, and we realised we hadn’t heard him cry since coming out.

‘I was debating whether I should cut it or not, but Jade reminded me that you need to clamp the cord before doing so, otherwise it would bleed everywhere.

‘Thankfully I managed to get the cord over his head and he let out a small whimper – which let us know he could breathe and was safe for the time being.

‘So I ran down to my mum’s for more help, telling her the baby was here and we needed help as soon as possible.’

It was then Sam saw a police car, driven by PC Ryan Holden.

‘God knows what he must have thought, but I basically threw myself into the road to get him to stop. I knew I needed his help but also needed to get back to Jade as quickly as possible.

‘I can’t really remember what I said to him, I think it was just word-vomit explaining everything that had happened and that we needed help.

‘He came in, saw the situation, and called for two more officers to come over – which was when my mum arrived on the phone already speaking with the ambulance dispatcher.’

Two more officers arrived, PC Steve Winn and PC James Day, who came in and supported the couple, cutting the umbilical cord under the guidance of the ambulance dispatcher and making sure both Jade and Freddie were comfortable.

‘We keep having a chuckle about the fact that, just a couple of days after Christmas, we had a baby, were visited by three police officers, like the wise men, and later came back to give us gifts of flowers, chocolates, and a card.’

The paramedics arrived shortly after and took Sam, Jade, and Freddie to the hospital. Doctors confirmed that the baby and mother were fine and were even able to discharge them that night.

‘The shock didn’t hit us until we were back from the hospital, we just had a big cry together in the flat – it had been such a long day for us both,’ says Sam.

‘The fact that we just managed to get on with it and handled it, when I had no medical experience, just really shows that you can have this parental instinct inside of you to know what to do if you need to.

‘But it was a very traumatic day for us both. Normally, neither of us can handle gore or anything like that, Jade gets a papercut and she nearly passes out, so for us both to handle childbirth together is nothing short of amazing, really.

Jade adds: ‘Even thought it might have been traumatic for the both of us, it was in the very best of ways because we now have Freddie in the world.

‘I’m so proud of Sam for helping to bring Freddie into the world before running for help. I would have been lost without him.’

‘Next time we’re expecting, though, I think we’ll be camping outside of the maternity ward,’ says Sam. ‘Because I don’t think either of us want to go through that again!’


MORE : How to fix your sleeping pattern after the festive period


MORE : Mum begs for help after son draws on his forehead with invisible ink that won’t budge