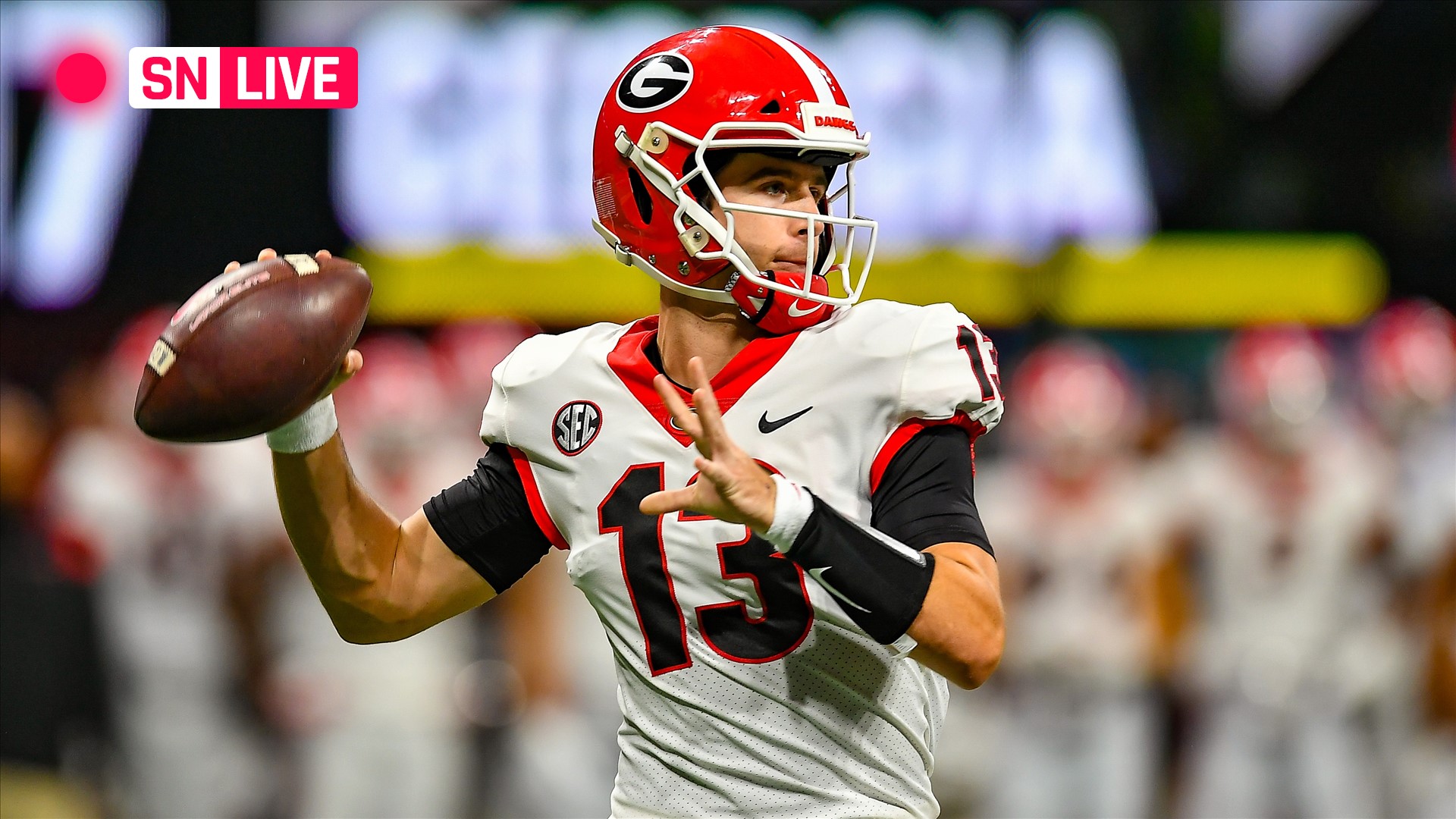 This has been the season Jim Harbaugh and the Michigan Wolverines have waited for.

They finally knocked off rival Ohio State for the first time since he became the new head coach, and proceeded to win the Big Ten. Now, No. 2 Michigan finds itself in the College Football Playoff set to face its biggest challenge of the season, No. 3 Georgia in the Orange Bowl.

Georgia had been viewed as the No. 1 team all season until it was routed 41-24 against No. 1 Alabama in the SEC Championship game. Michigan is coming off a 42-3 blowout win against Iowa in the Big Ten Championship.

Sporting News is tracking live scoring updates and highlights from Michigan vs. Georgia in their College Football Playoff semifinal on Friday. Follow below for complete results from the 2021 Orange Bowl.

8:53 p.m.: Georgia nearly blocks the punt, but the ball is sent away. Georgia starts with the ball at its own 31.

8:45 p.m. Georgia scoring play: Bennett’s pass to Ladd McConkey is caught, but short of the first down at the Michigan 11. Podlesny makes his second field goal of the night, this one at 28 yards. Georgia extends its lead to 20-3.

8:43 p.m.: Trading big plays. After Michigan gets a huge play on its last drive, Georgia responds with Bennett finding Cook along the sideline for 53 yards to jump right back into the red zone at the Wolverine 15-yard line.

8:37 p.m. Michigan scoring play: McNamara is sacked, rushes for a short gain and finds Erick All for seven yards, but the Wolverines will settle for a field goal from 36 yards out by Jake Moody to get on the board. Georgia still leads 17-3.

8:35 p.m.: Michigan gets the big play it has needed. McNamara hits Roman Wilson on the right sideline with a 42-yard pass to move the Wolverines up to the Georgia 19-yard line.

8:33 p.m.: Hassan Haskins takes his fourth carry of the game up four yards for a first down at the Michigan 38.

8:27 p.m. Georgia scoring play: Michigan finally gets a stop on third down as Bennett’s pass to John Fitzpatrick deflects out of the tight end’s hands. Jack Podlesny drills the 43-yard field goal to cap off Georgia’s third scoring drive. Georgia extends its lead to 17-0.

8:26 p.m.: Bennett follows that rush up by gaining 20 on a scramble to move the Bulldogs up to the Michigan 27.

8:25 p.m.: McIntosh gives Georgia its fourth third-down conversion of the day with a four-yard rush up the middle. Wolverines haven’t been able to get the Bulldogs off the field.

8:20 p.m.: Bennett finds George Pickens, his first reception of the day, for a nine-yard gain to give the Bulldogs a first down at the Georgia 41.

8:11 p.m.: Nakobe Dean shows off why he was the 2021 Butkus Award winner. He catches Blake Corum two yards behind the line of scrimmage on a pass to force Michigan to punt. Fair caught at the Georgia 24-yard line by Kearis Jackson.

8:09 p.m.: Michigan picks up the first down, with McNamara finding Daylen Baldwin on third-and-five with a six-yard pass.

8:03 p.m. Georgia scoring play: The Bulldogs reach into their bag of tricks. Bennett hands the ball off to McIntosh, who then heaves the ball to a wide-open Adonai Mitchell in the end zone for the score. Georgia extends its lead to 14-0.

8:00 p.m.: James Cook was very close to breaking loose after a long gain. He rushed ahead 21 yards before he was brought down at the Michigan 29-yard line.

7:55 p.m.: McNamara’s pass on third down is swatted away and falls incomplete. The Wolverines go for it on fourth down, and it’s another incompletion, handing Georgia the ball at its own 41.

7:53 p.m.: Donovan Edwards charges up 10 yards to pick up another first down for the Wolverines, moving them into Georgia territory up to the 47.

7:52 p.m.: After Michigan is moved back on a false start penalty, Cade McNamara scrambles 18 yards up the middle for a first down.

7:49 p.m. Georgia scoring play: First CFP game for Bowers, first drive, first touchdown. He catches a pass from Bowers on the left and takes it up nine yards untouched into the end zone to score first against Michigan. Georgia takes a 7-0 lead.

7:48 p.m.: White gains two yards up the middle to gain a first-and-goal at the Michigan 9.

7:43 p.m.: Brock Bowers makes a strong catch on the fingertips along the left sideline for a 35-yard gain that puts the Bulldogs at the Michigan 20-yard line.

7:42 p.m.: Stetson Bennett completes his first pass of the game out to Adonai Mitchell for 16 yards and a first down out to Georgia’s 45-yard line.

7:41 p.m.: First offensive play of the game is Zamir White up the middle nine yards.

7:40 p.m.: Kenny McIntosh returns the kick 14 yards out to Georgia’s 20, where he is met by a strong Michigan kickoff return coverage. The Orange Bowl is underway.

7:38 p.m.: Michigan won the toss and elected to defer to the second half. Georgia’s offense will start the game.

7:22 p.m.: Michigan defensive back Daxton Hill has been warming up on the field. He’s been questionable leading up to the game, and is a key piece of the Wolverines’ defense.

7:01 p.m.: Michigan and Georgia now both know the team to beat in the national championship: No. 1 Alabama.

What channel is Michigan vs. Georgia on?

The game will be broadcast nationally on ESPN. Chris Fowler (play-by-play) and Kirk Herbstreit (analyst) will call the game from the booth, while Holly Rowe and Marty Smith will report from the sidelines.

ESPN is also rolling out its Megacast for the College Football Playoff, once again providing alternate broadcasts across its family of networks. Here’s the full rundown.

Both College Football Playoff semifinals will broadcast on ESPN and are available to stream live on all of the network’s digital platforms (ESPN.com, ESPN App, etc.).

Cord-cutters have several live streaming options available to watch. Below is the list.