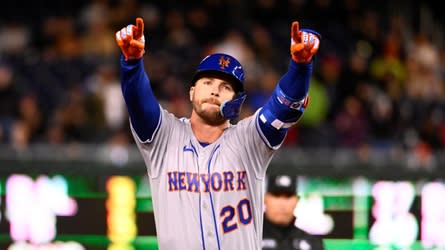 After dropping Game 1, the Mets offense woke as much as defeat the Philadelphia Phillies, 6-1, in Game 2 to separate the doubleheader.

– Pete Alonso received the Mets on the board early with a two-out two-run house run within the first inning off of younger starter Cristopoher Sanchez. The Polar Bear would hit one other, this time a three-run shot, to provide the Mets a 5-1 lead within the fifth. Alonso went 3-for-5 within the recreation with these two homers and 5 complete RBI.

– Chris Bassitt took the mound for the Mets and with a lead, the right-hander was efficient for the Amazin’s. With the climate chilly and windy, Bassitt was in a position to find his curveball and paint the corners along with his fastball and off-speed stuff. He even labored round a questionable balk name that prolonged an at-bat within the first inning.

After giving up a solo shot to Jean Segura within the second inning, Bassitt would scatter Phillies runners by way of 5.2 innings. The first-year Met threw a season-high 101 pitches giving up only one run, one stroll, 5 hits whereas hanging out 4 and selecting up the win to go to 4-2 this season.

– The solely different Mets run got here by way of a wild pitch that scored JD Davis within the sixth. The inning began with Tomas Nido double, which was adopted by a Davis single. Unfortunately, Nido was tagged making an attempt to go from first to 3rd. Jeff McNeil and Starling Marte each struck out to finish the inning.

– The Mets bullpen did its job, with Chasen Shreve, Drew Smith and Seth Lugo combining for 3.1 shutout innings.

After an off day, the Mets proceed their highway journey and begin a three-game sequence in opposition to the Washington Nationals on Tuesday at 7:05 p.m.