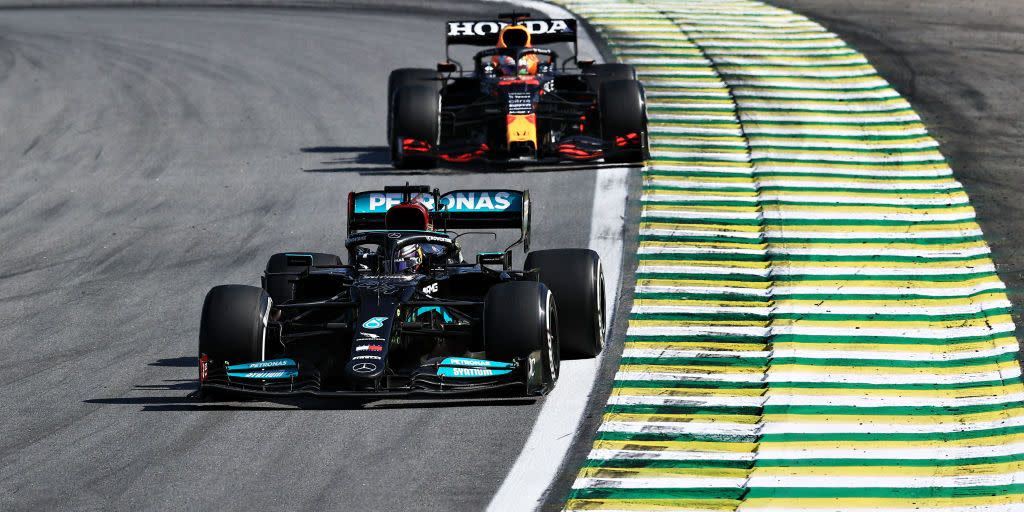 At last, as Formula 1 teams and officials prepare for the inaugural F1 Qatar Grand Prix, the outcome from the previous round in Sao Paulo, Brazil, has been settled.

Mercedes had issues with Max Verstappen’s conduct during his battle with Lewis Hamilton at Interlagos Circuit in Brazil when both drivers went wide at turn 4 midway through the race. The incident was noted but not investigated by stewards at the time.

Mercedes earlier this week lodged a Right of Review, as permissible under the FIA’s International Sporting Code, when front-facing onboard footage from Verstappen’s car was made available, having not been broadcasting live at the time of the incident.

A virtual hearing was held on Thursday, and almost 24 hours later a verdict was finally delivered: Mercedes’ Right of Review was rejected. Stewards deemed that while the front-facing onboard footage from Verstappen’s car was new and relevant, it did not meet the threshold to be considered significant.

Stewards outlined that “had they felt the forward-facing camera was crucial in order to take a decision they would have placed the incident under investigation and rendered a decision after this video was available—they saw no need to do so.”

Therefore the footage was not deemed significant enough for Mercedes’ Right of Review to be granted. The decision was not on the merits of the incident itself but whether the new footage would have meant the incident should be reviewed.

In reality Mercedes was not pushing for a penalty for Verstappen—and never expected one. More so it wanted to clarify on-track conduct in the wake of a rash of incidents and near-clashes between the title protagonists this year.

“I think we wanted to trigger discussion around it because probably it will be a theme in the next few races and I think that objective is achieved,” said Mercedes boss Toto Wolff. “We didn’t really think it would go any further.”

Meanwhile, while this is chapter closed in the Hamilton-Verstappen/Mercedes-Red Bull fight, a potential new fight emerged on Friday. Red Bull boss Christian Horner emphasized that “there is no relationship” between the parties, and suggested a new protest could be just around the corner.

Red Bull has its suspicions over Mercedes’ rear wing and the method in which it believes it is able to reduce drag at full speed and higher load, thereby aiding straight-line performance. It is unrelated to the DRS issue Hamilton suffered during qualifying in Brazil, where damage to two screws meant it opened 0.2 millimeter beyond the 85 mm limit on one side.

“If we believe the car is not in compliance, we will protest, because the straight-line speeds we’ve seen in Mexico and Brazil—I think everyone could see in Brazil was not a normal situation,” said Horner. “And yes, a new engine we know with a Mercedes comes with an increased performance, but when you have sort of a 27 km/h (closing speed) and you witness marks on rear wing endplates that have been marking up from wings that have been flexing, it’s very clear to us what has been going on.

“Of course, that’s why I refer that it’s down to the FIA [as the regulator] to make sure that the cars are in compliance. If they’re not, you protest if you believe that a competitor isn’t complying with the rules.”

Horner’s comments came while sat next to Wolff during a tense press conference in Qatar, venue for this weekend’s Grand Prix, in which they barely shared a pleasantry or eye contact.

“I think it’s in many respects even more pertinent to the two circuits that are coming up,” said Horner on the rear wing that Red Bull finds contentious. “But as a competitor, as I’m sure Mercedes – and we know – have paid a huge amount of attention to our car throughout the season and we’re obviously doing the same. Obviously it’s high stakes, there’s an awful lot to play for and we just want to make sure it’s an equal playing field.”

As the verbal mud was flung around Wolff retorted: “If you’re left by skepticism because someone told you something and you expect that to be the root cause, you should go for it [a protest]. We’ve said that we’ve been controlled 14 times on this very special—on this very particular—rear wing, the FIA has all drawings about it, there is no such thing as Red Bull expects there to be.”

Wolff said he would be “happy to send one to Milton Keynes,” where Red Bull is located. Horner asked Wolff to “explain the score marks on the rear wing endplate,” to which Wolff replied: “I think it’s within what is allowed and therefore that’s OK.”

“I think that nobody would show up at the track with an illegal engine or illegal rear wing, the world is too transparent for that,” said Wolff.