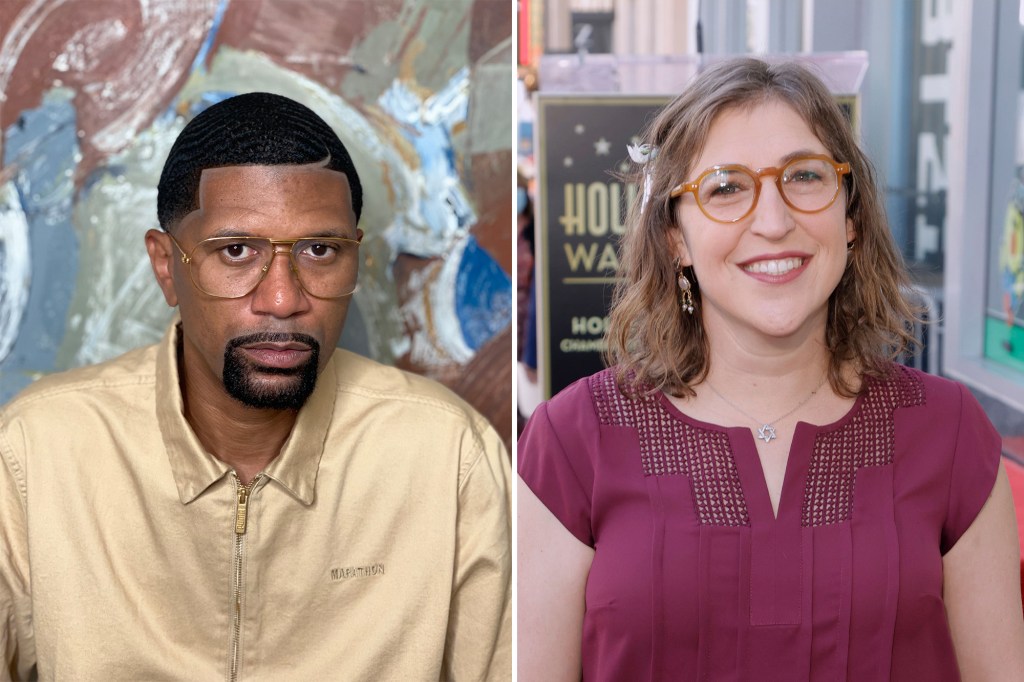 I love “Jeopardy!” And after the great Alex Trebek passed away, we’ve had a national debate about his successor. Unfortunately, the selection process has turned uglier than a presidential election with mud slinging, digging up dirt or just inventing narratives. The latter is true for my “Renaissance Man” guest Mayim Bialik, who is an interim co-host — and admitted to feeling the sting of the glare. Especially after she was incorrectly labeled an anti-vaxxer.

“After the New York Times did a piece on me which I found really kind of like, neutral … I can’t tell you the number of people who were like, ‘she’s an anti-vaxxer,’ ” she told me of the October article.

“And it’s like, ‘Did you not read the article?’ That upsets me just as a human. It doesn’t upset me as a celebrity so much because, like, I’m grateful to my publicist for reminding me not to read comments. I had a little slip … But the fact is, like, when people say things about you that aren’t true, that hurts. And that hurts, whether it’s between you and your girlfriend or, you and your lover or, you know, on the New York Times comments section … I really just wanted to be like, ‘I’m not an anti-vaxxer.’ Like, my kids were vaccinated late. That’s true. And we were vaccinated.”

Mayim has been famous for a long time. As a child actor whose breakthrough role was a young CC Bloom (a k a Bette Midler) in “Beaches,” she later played plucky teen “Blossom.” Back then the most controversial thing about her was her choice of floppy floral hats.

Now, in social media-centric 2021, she is a mother of two, has a Ph.D. in neuroscience and a lot of nuanced educated opinions that apparently get people, who don’t read beyond the headline, fired up. She also hosts “Breakdown,” a podcast on mental health, where I was recently a guest. We had great chemistry, so I wanted to do a home and home, talk hoops, faith, science and childhood fame.

I became famous as a teen, so I understand how the spotlight affects your maturation. She had notoriety even earlier. And as she spoke about her experience, I was nodding yes to everything she had to say about it.

“It’s hard having everyone tell you you’re amazing when you know that that’s not always true. And it’s hard, having people be interested in you for what you can provide for them or what you can give them … So I think there’s a part of you that doesn’t really develop all the way, especially when you have fame young. You know, like, there’s part of you that’s always like, ‘Love me, love me. Like, What can I do?’ You know? So there’s definitely an aspect to my life that was shaped by that,” she said. Though she doesn’t know who she’d be without having walked that unique showbiz path.

And there were perks: lots of NBA games. She recalled watching a young Shaq play and attending an NBA All-Star Game. Raised in LA by New Yorkers with Knicks affiliations, she somehow is a rabid fan of Golden State. And let’s not forget her beloved UCLA Bruins. Mayim left acting to attend UCLA, where she did regular college kid things like sleep outside of the Pauley Pavilion for tickets.

“In those days, that was the decade of decadence at UCLA. I saw more games than I can count at Pauley Pavilion … I mean, we were out of our minds for UCLA basketball,” she said.

Mayim intended to go to medical school and become a psychiatrist. But she said she didn’t have the grades, so instead she went to grad school. She also took time to be a young mother and raise her kids, now 13 and 16. And the reason she returned to acting is pretty shocking: she needed health insurance.

“I wasn’t thinking I’d be on the ‘Big Bang Theory.’ I’d never watch the show. I was busy. We ran out of health insurance because health insurance is not provided in this country unless you have a certain kind of job,” she said. We talked a lot about the importance of addressing mental health struggles, more about hoops and also brain trivia.

Mayim handled my rapid-fire Gone in 60 Seconds segment like a pro. She said the best Jewish delicacy people should try is a black and white cookie, that Steph Curry should host “Jeopardy!” and admitted she was horrible in math. Her favorite female TV character from the ’90s is Regina King’s Brenda Jenkins from “227” which is an excellent choice (though I am partial to Marla Gibbs who played my mom in the “Jalen vs Everybody” pilot).

Finally, she said if she wasn’t in showbiz, she’d be an excellent organizer. I don’t want to brag, but being a former pro athlete and current frequent flier, I am also an ace at organizing, packing and cleaning out garages. So I am pleased to announce the formation of our newest venture: Rose Blossom Organizers. We let your neatness bloom. OK, so I haven’t actually checked with Mayim on that yet, but I do think I’d look great in a floral workman’s jumpsuit.

Detroit native Jalen Rose is a member of the University of Michigan’s iconoclastic Fab Five, who shook up the college hoops world in the early ’90s. He played 13 seasons in the NBA, before transitioning into a media personality. Rose is currently an analyst for “NBA Countdown” and “Get Up,” and co-host of “Jalen & Jacoby.” He executive produced “The Fab Five” for ESPN’s “30 for 30” series, is the author of the best-selling book, “Got To Give the People What They Want,” a fashion tastemaker, and co-founded the Jalen Rose Leadership Academy, a public charter school in his hometown.