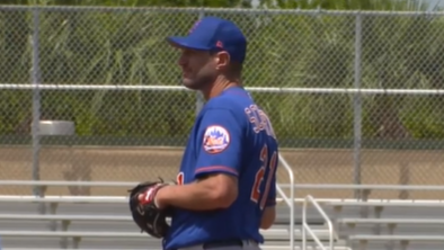 After allowing a run in the first inning (on a bunt single, stolen base, and bloop single), Scherzer didn’t allow much else, retiring nine batters in a row at one point against what was a lineup made up mostly of Marlins regulars.

Overall, Scherzer allowed one run on three hits while walking none and striking out five. He threw 72 pitches.

Monday’s start was Scherzer’s second time this spring in game action, with his first start coming during a simulated game last week.

In that game, he tossed 4.0 innings during what was his first taste of game action since signing with the Mets.

Scherzer looked mostly sharp in that outing, but allowed a pair of homers to Dominic Smith, with both of them pulled over the right field fence.

Scherzer said last week that he wanted to stretch out to 100 pitches before the start of the regular season, and he’s on track to do so. He will likely be limited to about 90 pitches during his next start, clearing him to toss 100 or so in what would be his final start before breaking camp.