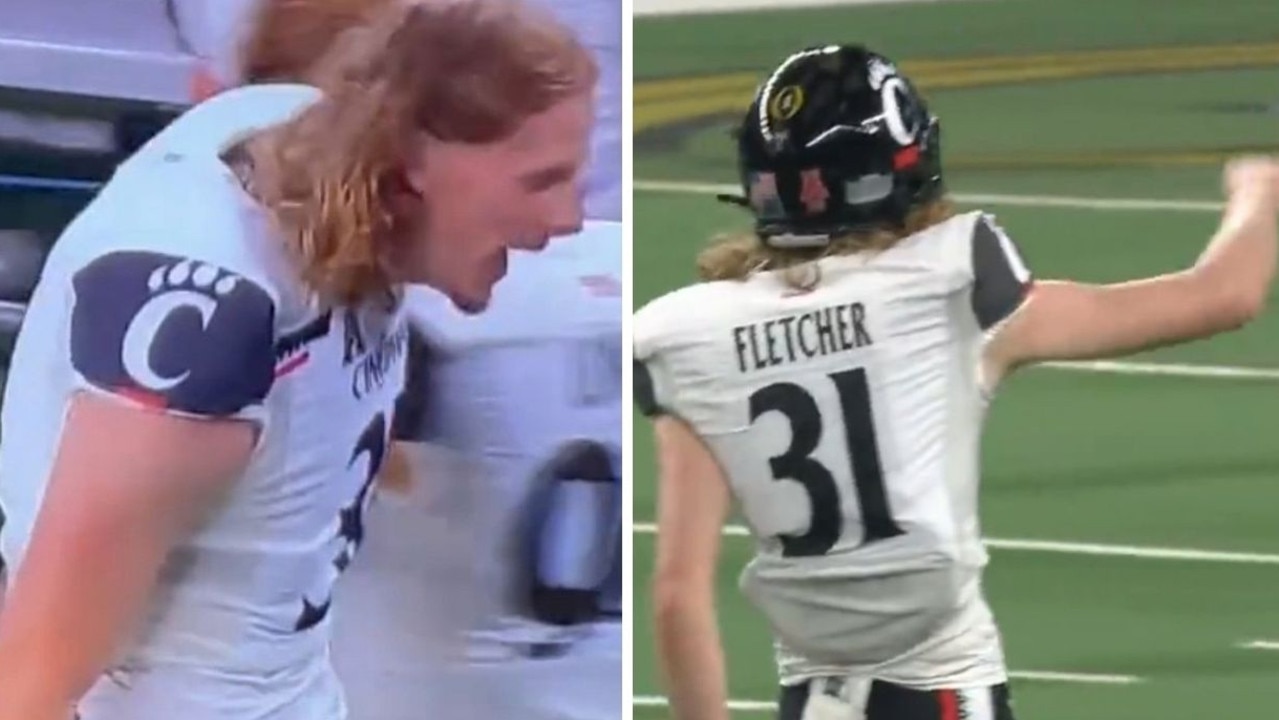 His team may have lost but Australian youngster Mason Fletcher gained a whole new legion of fans with his performance in one of the biggest college football games in America.

The 21-year-old is the son of AFL legend Dustin Fletcher, who played 400 games for Essendon and was best known for his wiry physique and tendency to unleash long bombs and torpedos from outside 50.

Watch Live NFL every Monday, Tuesday and Friday with ESPN on Kayo. 6 live games every week + every game of the Post-Season. New to Kayo? Start Your Free Trial >

And Mason has clearly inherited that ability, which he showed off while playing for underdogs Cincinnati against Alabama in the Cotton Bowl — the College Football Playoff game.

In the second quarter, Fletcher unleashed a monster 54-yard punt that trapped Alabama inside their 10-yard line.

He was pumped up and celebrated by swinging his arms in the style of the “billionaire strut” made famous by UFC star Conor McGregor.

A massive TV audience of 19 million viewers tuned in to the game and many were stunned by Fletcher’s performance on the big stage.

“Props to Mason Fletcher making the most of a chance to become a household name,” UK sports form analyst Rory Flanagan tweeted.

Fletcher taunted Alabama after his punt and then attempted to pull the ball out from under a pile of players to secure a turnover before being quickly tossed away by an opposition player.

American football fans couldn’t get enough of the confident Aussie getting in to the thick of the action and causing a stir.

Fletcher even caught the attention of popular US sports talk host Pat McAfee, who shared his admiration for the punter in a hilarious video on Twitter.

“Fletcher hits the billy strut after a 54-yarder and now he’s getting picked up and tossed around,” McAfee said.

“Almost caused a turnover, getting in the heads of every Alabama player. Mason Fletcher crushing the Bama boys!”

With his long flowing red hair and skinny arms that looked like they might snap like a twig at any moment, McAfee had found his latest cult footballing hero.

“Listen, people were talking about his arm size,” he said.

Unfortunately Fletcher’s efforts weren’t enough to get the Bearcats over the line against top-seeded Alabama.

In the Cotton Bowl at Dallas, Alabama’s Brian Robinson ran 26 times for 204 yards, and Bryce Young completed 17-of-28 passes for 181 yards and three touchdowns as the Crimson Tide rolled over previously undefeated Cincinnati 27-6.

Alabama won a sixth consecutive semi-final appearance to reach the final for the sixth time in seven years.

“I’m really proud of this group to come this far, ” Crimson Tide coach Nick Saban said. “Now is not the time to be relieved, but it is time to enjoy what we have achieved.”

The Crimson Tide will chase a fourth playoff crown after titles in the 2015, 2017 and 2020 seasons, completing an unbeaten campaign last season by beating Ohio State 52-24 and spoiling Georgia’s only trip to the playoff final in overtime to cap the 2017 season.