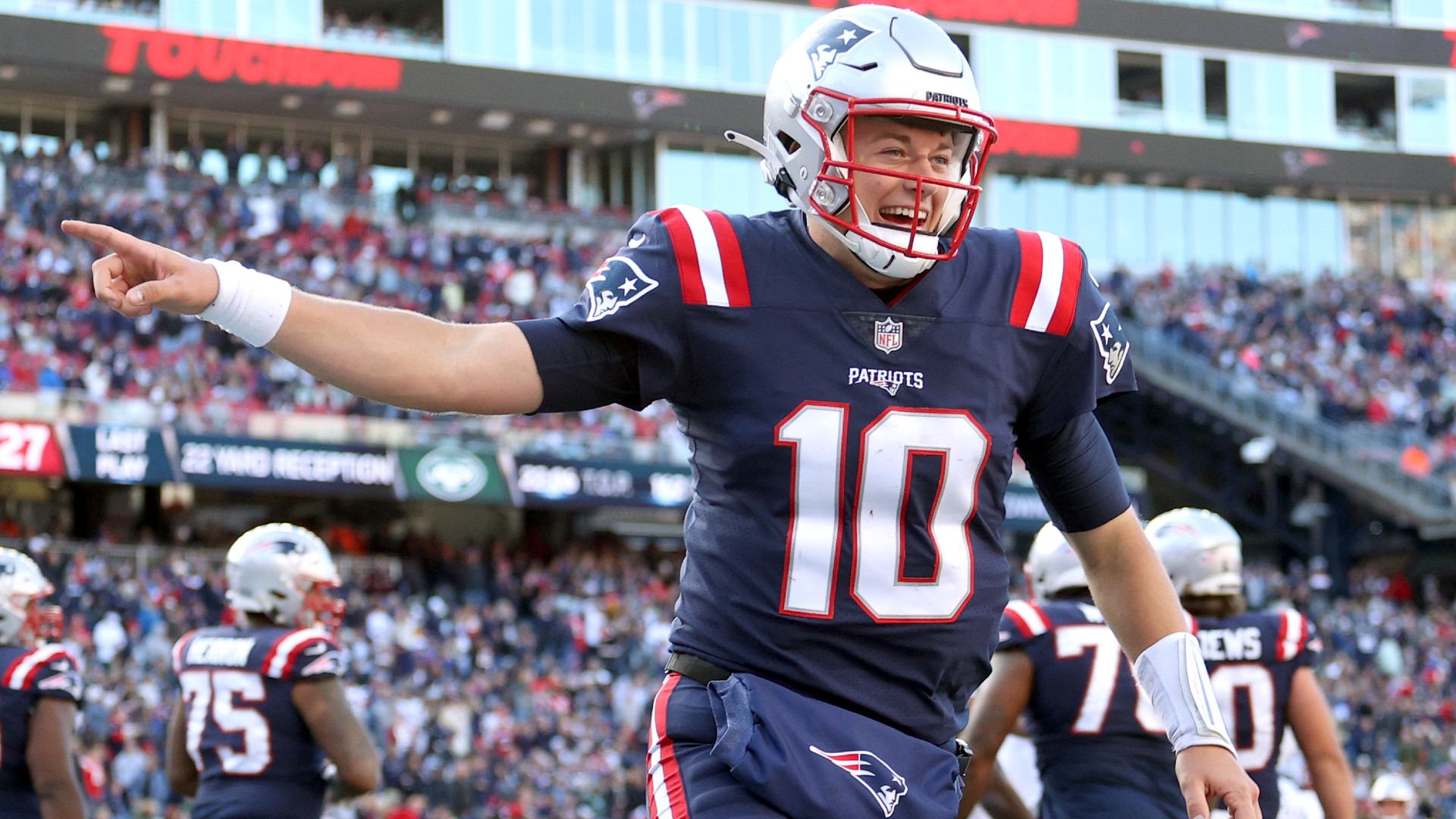 Four NFL teams turned their backs on Mac, and the Patriots QB is probably satisfied with that outcome.

There were five first-round quarterbacks in the 2021 NFL Draft and the fifth off the board has had the most success early on in the 2021 NFL season. It’s coming as something of a surprise to some, but not as much to others.

So far, the rookie draft class has looked like, well, rookies, but Mac Jones has separated himself from the pack thanks to a really solid supporting cast in New England that have accentuated his talents.

While Jones doesn’t have the strongest arm, nor is he the most mobile, he’s accurate and

But what if the pre-draft hype seeped into the brains of the four teams taking quarterbacks before Jones? How would it have worked out?

The Urban Meyer offense (with the help of Darrell Bevell and Brian Schottenheimer) has looked fine on the ground this year: Their collective 5.1 yards per attempt is good for second in the NFL. Teams with good rushing attacks are always helpful to young passers.

That said, the Jaguars are still scuffling with Trevor Lawrence, who has thrown nine interceptions on the season, despite being the most heralded QB prospect in some time.

Jones has made his living underneath, and the passing attempts by depth and direction are fairly comparable between the two passers. It would be hard to see how any rookie QB would work with this wide receiver corps, or its lack of true tight end threats, a problem that was somewhat rectified in the Dan Arnold trade (Tim Tebow is a free agent, you know).

This is where things get interesting. While Jones doesn’t boast the explosive arm talent that Zach Wilson has showcased at points throughout the season, the Mike LaFleur designed offense could have fit Jones’ talents comfortably.

The best example of that would be the Mike White-led Jets in the win over the Bengals. White’s average depth of target for that game was 4.2 yards, essentially dumping off the ball on short routes underneath and letting his playmakers do the work. That, though, is not something that’s sustainable over a 17-game season.

The main problem with the Jets offense would remain a constant even with Jones: They don’t have anyone who can really work the middle of the field consistently or effectively. Jones has made that work using two tight ends in New England, and the Jets barely have enough gusto to roster one in 2021.

Robert Saleh urged that Zach Wilson would benefit from playing “boring football” early in the season. So far, that looks like that’s exactly what Jones specializes in.

Even through that, the lack of a true TE1 (or even TE2) and with struggles in the offensive line throughout the year, it’s hard to see Jones thriving in Year 1 with the Jets as he would the Patriots.

While Jones’ physical attributes pale in comparison to the No. 3 overall pick Trey Lance, there were rumblings that the 49ers were actually interested in Jones over Lance before the draft. It’s easy to see why.

With the 49ers’ run-heavy attack, Jimmy Garoppolo doesn’t have to do much (when the run game is working, like it was vs. the Rams). The real key is being able to dissect the defense pre-snap and put the ball in the right spot, quickly and accurately.

Coincidentally enough, Jones’ best traits air his ability to process quickly and get the ball out in a good spot. More than physical traits, that’s something that’s shared with Garoppolo. While Garoppolo has a quicker release, Jones has a propensity to make the right read faster. They also have comparable arm talent.

While Jones’ ceiling isn’t as high as Trey Lance — just given physical attributes — he’s more proven early on, and the 49ers have had a few packages this year to capitalize on Lance’s dual-threat ability.

Throughout his coaching career, though, Shanahan has always seemingly preferred the buttoned-up pocket passer (Matt Ryan, Kirk Cousins, Garoppolo), meaning that the introduction of a guy as talented as Lance could force an evolution of the offense.

Given that Jones is already supported by a strong run game and good tight end corps in New England, with the Niners’ wideouts and a strong running game (and a healthy does of George Kittle), it’s easy to see why Kyle Shanahan was enticed with the opportunity to draft the Alabama quarterback.

Would it work? Yes.

Part of the reason why the Bears selected Mitchell Trubisky in 2017 was because of his dual-threat ability at quarterback, so it’s easy to see why Justin Fields was an option for Ryan Pace and Nagy in 2021.

While Nagy was hired in 2018, the idea was that he would bring some of that Kansas City offense to the Bears to really help elevate Trubisky’s game. That didn’t really work out, and the team switched back-and-forth between Trubisky and Nick Foles in 2020, before figuring out QB with Justin Fields again in 2021.

Nagy’s offense and playcalling has come under fire, and the Bears’ head coach hasn’t done a lot to help alleviate the offense this year to cater more to Fields’ unique physical gifts. Nagy’s RPO slanted scheme relies more on smart, quick thinking than it does physical talent.

Interestingly enough, with the Bears signing Andy Dalton prior to drafting Fields, maybe that’s an indicator of the type of quarterback Nagy wanted moving forward: A pure pocket passer who can read the field before and after the snap. The biggest critique of Fields’ game coming out was his ability to read defenses, even if it was an overplayed red flag.

There’s also the case of the offensive line, which has not been good. Fields’ elusiveness has been helpful in getting away from the rush, though he’s still be sacked a whopping 29 times this year.

All that to say: The issue with the Bears isn’t who’s at quarterback, but who’s calling the plays for that quarterback and what’s around him. Clearly, if the Bears jumped all the way up to No. 11 and traded a future first-round pick to select Fields ahead of Jones, maybe that should tell you what the felt of his skillset, anyway.